When I was around 13, I wrote a paper on Malta in school. Since then I have always wanted to go there.
Now it is time!

[Note: I did not write this blog when I was on vacation due to the time it takes - instead I wrote it all the days after I came home]

For this trip I am also bringing a friend, Marie-Louise. We both needed some sun and decided for this destination.

We took a direct flight from Gothenburg and landed on Malta in the early afternoon. 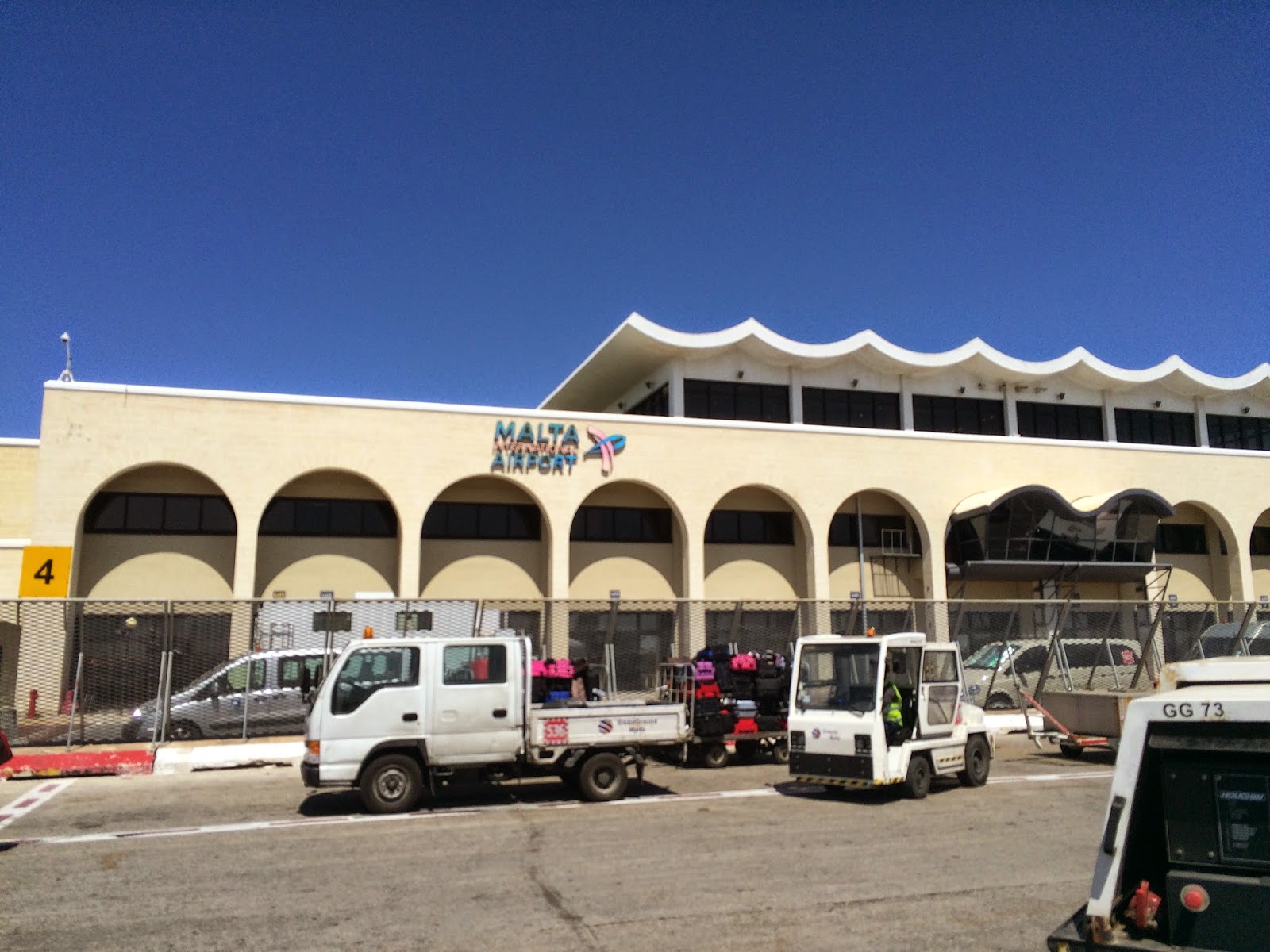 A cab ride later we were at our hotel; the InterContinental Malta in San Julien. A very fine hotel by the looks of it! 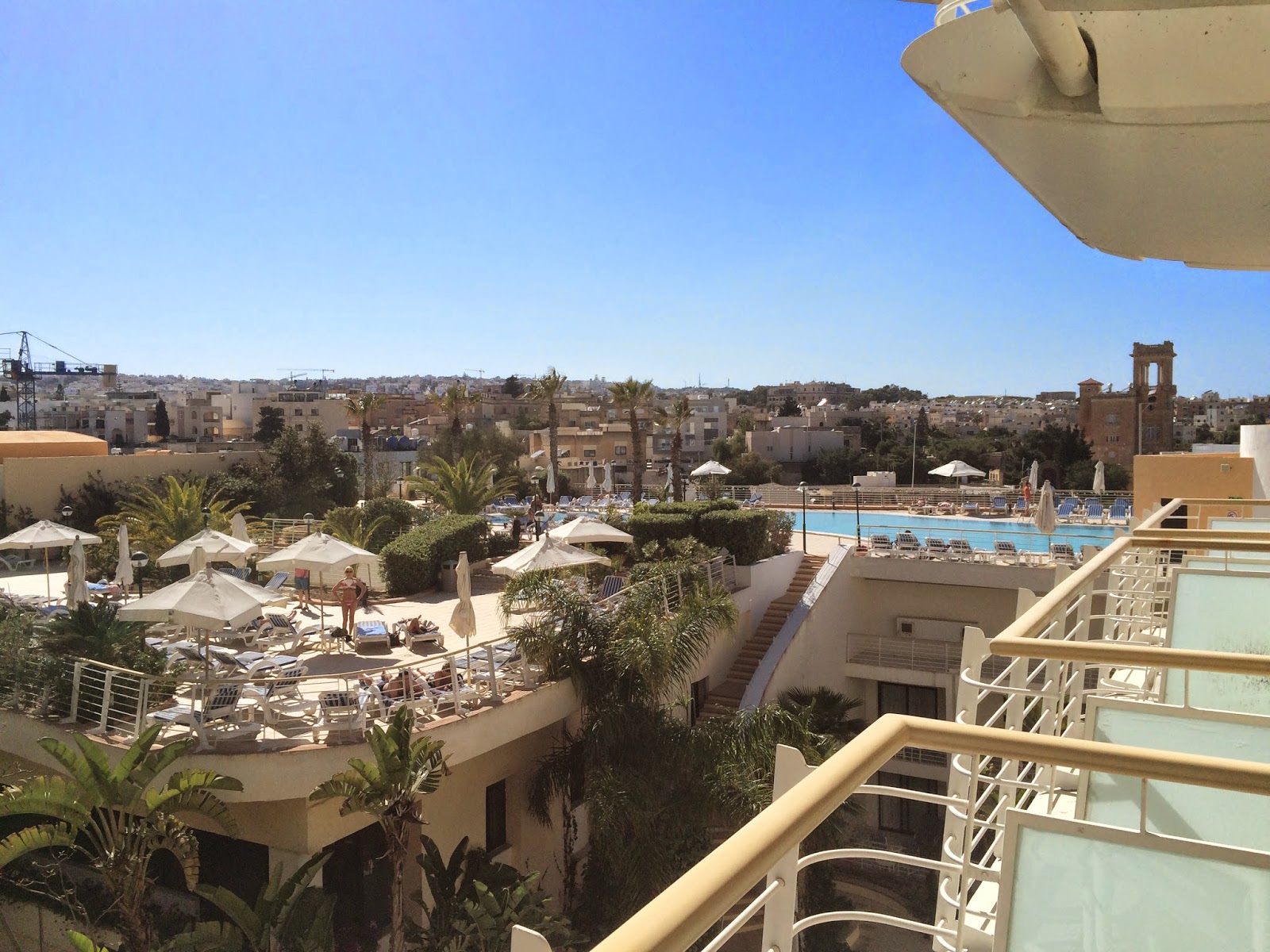 But no time to rest - time to explore Malta!

We walked along the coast line south towards Valetta to find a restaurant.

This was part of the view during the walk: 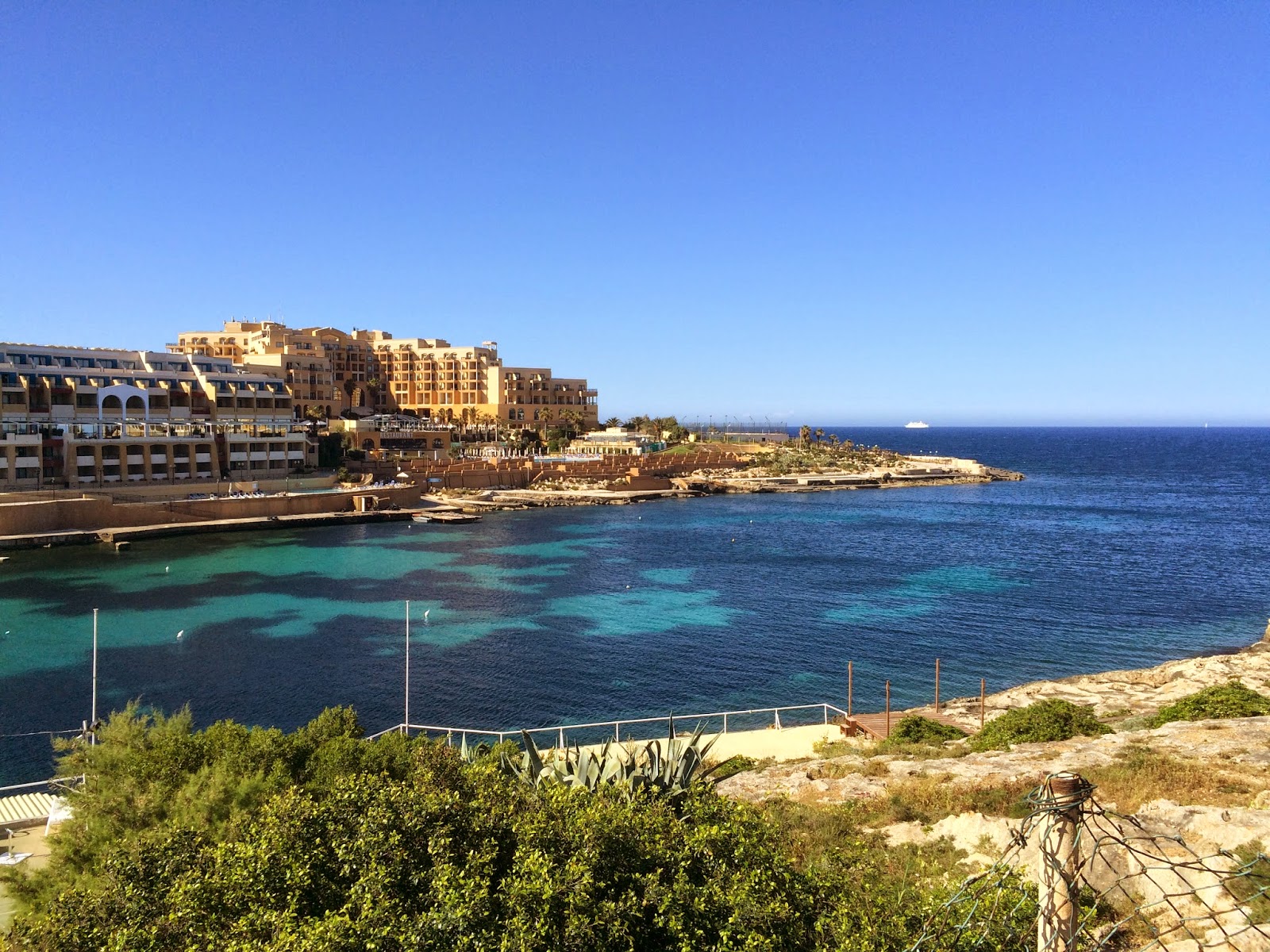 We eventually found somewhere to eat (I had pasta and some local beer; Cisk).

Then we walked on towards Valetta - the fortified capital of Malta: 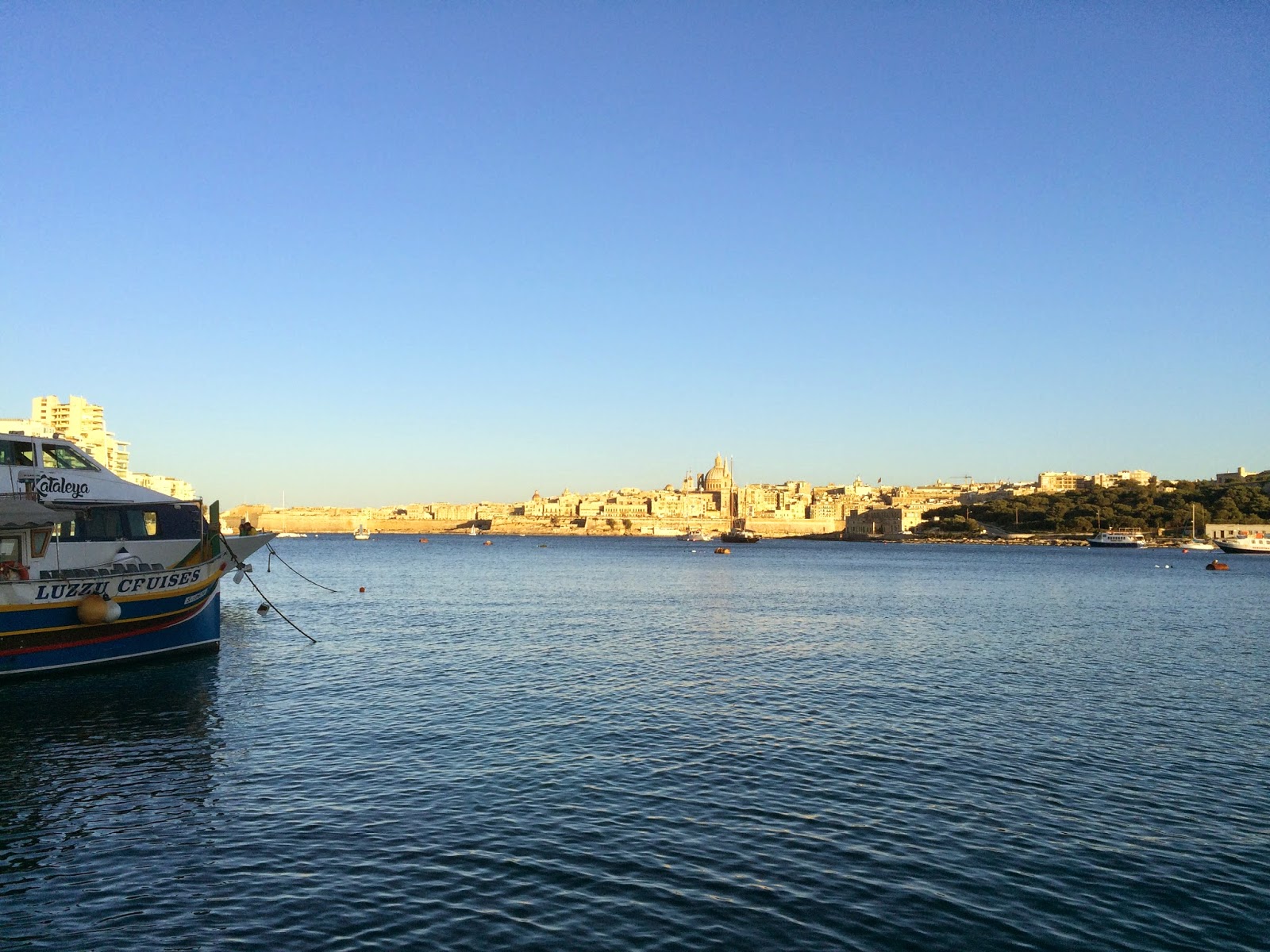 It was a nice little town, almost completely made by honey-coloured limestone (that all buildings are made of on Malta).
Like this one: 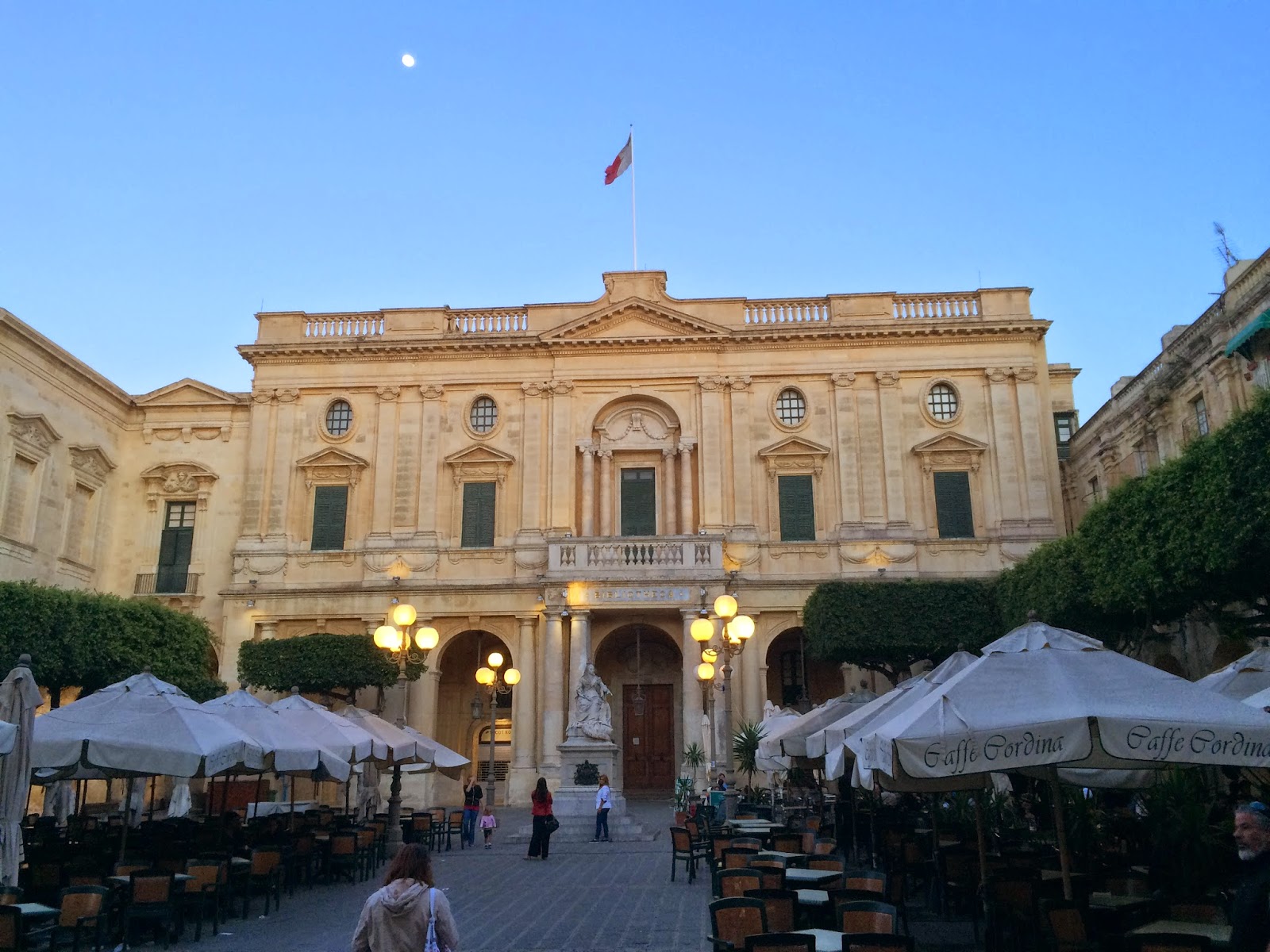 I also found the Bridge Bar - made famous in the Amazing Race season 25! :) 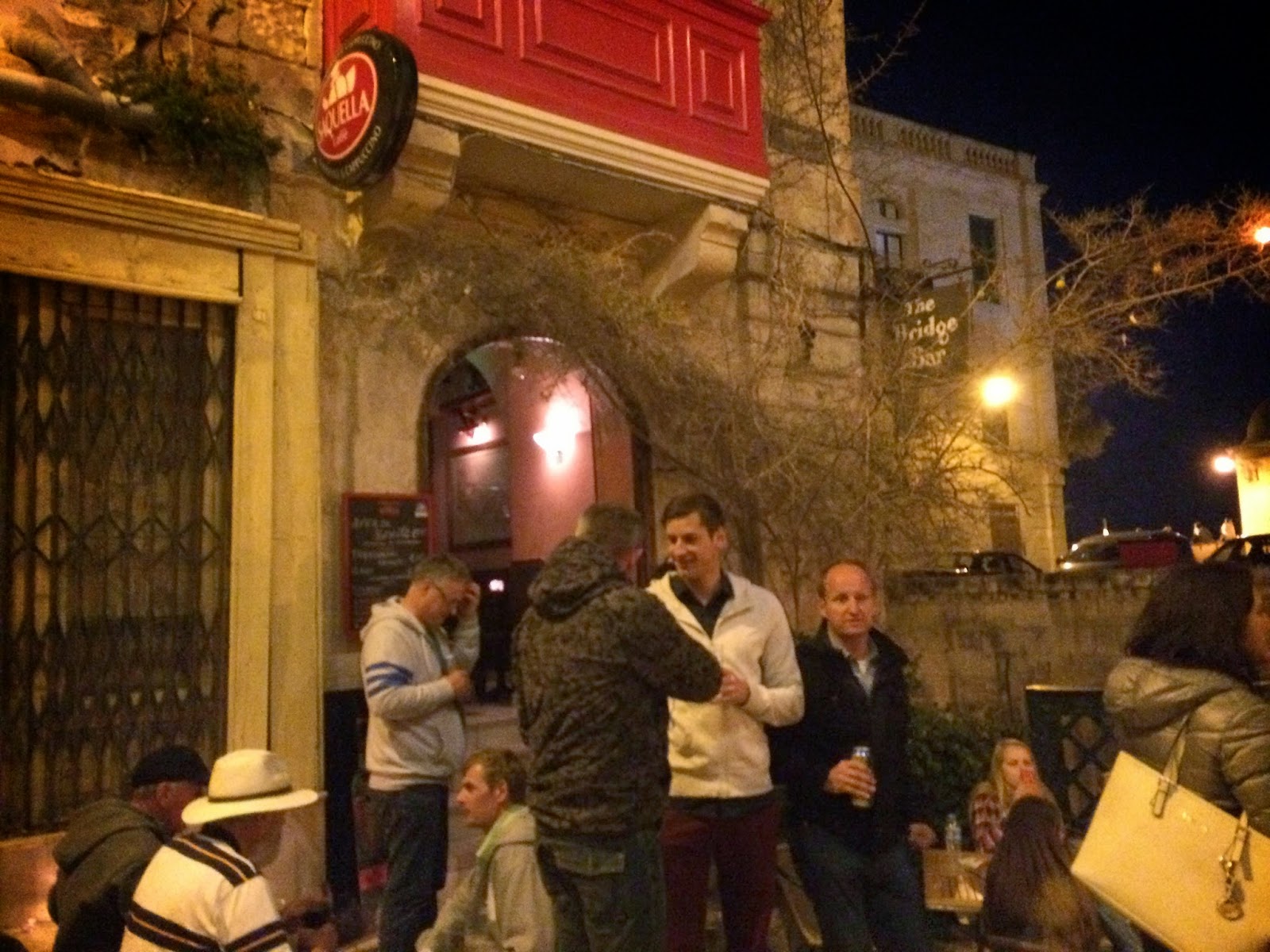 Apparently there is a fireworks contest here this weekend - so the evening ended in watching some fireworks!
(well, we watched one team - then got bored and decided to return to the hotel and get some sleep)
Posted by Halo at 10:38 pm No comments:

After a great breakfast at the hotel, it was time for a bus trip to Mdina, the old capital of Malta.

We had decided to use the local buses instead of a tourist-sightseeing bus because it actually seemed easier - and much cheaper.

The bus went through the town Mosta on the way and we got off and went to the cathedral there: 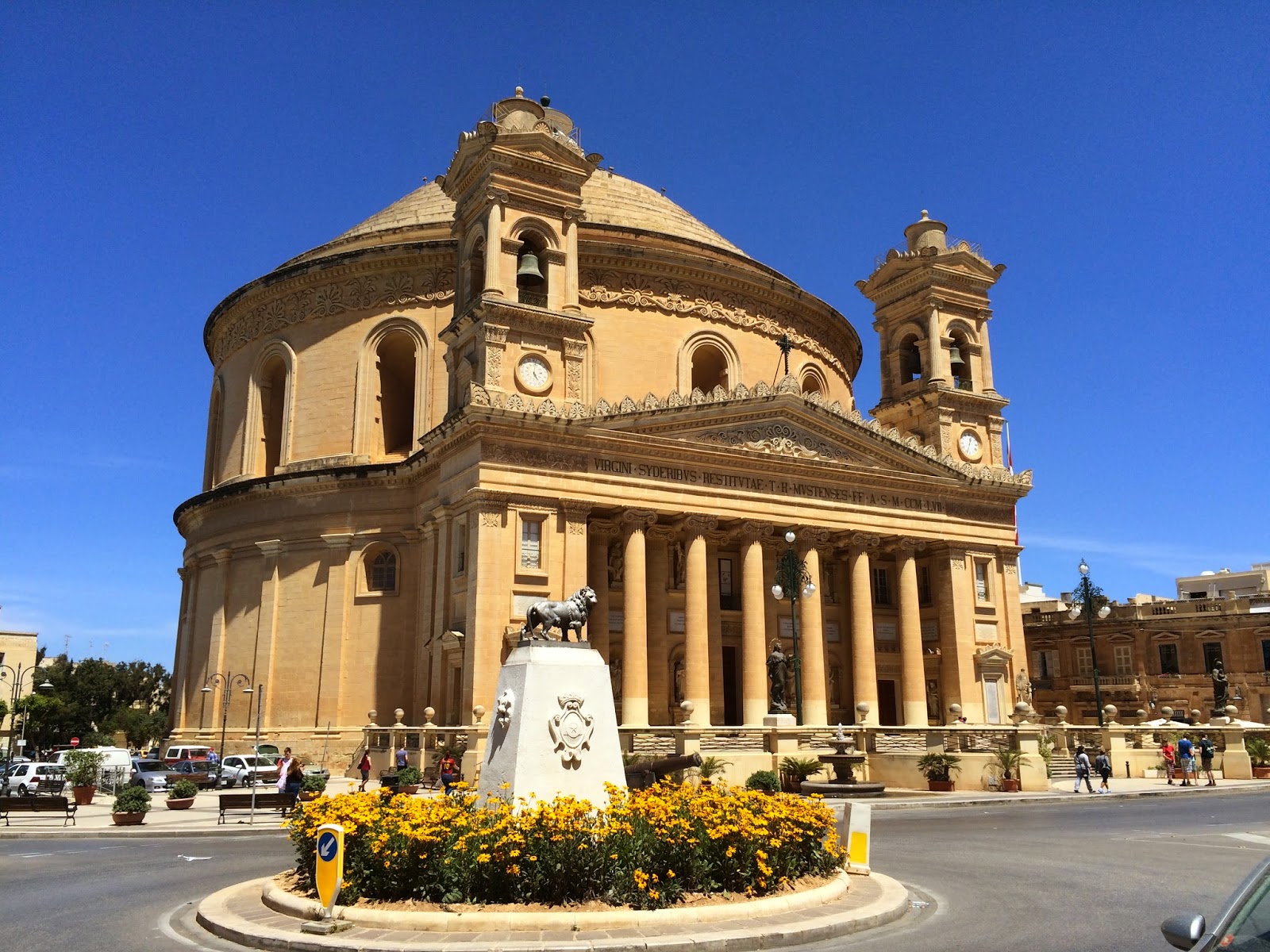 Apparently it's the third largest dome in Europe (and ninth in the world).

Here is how it looked inside: 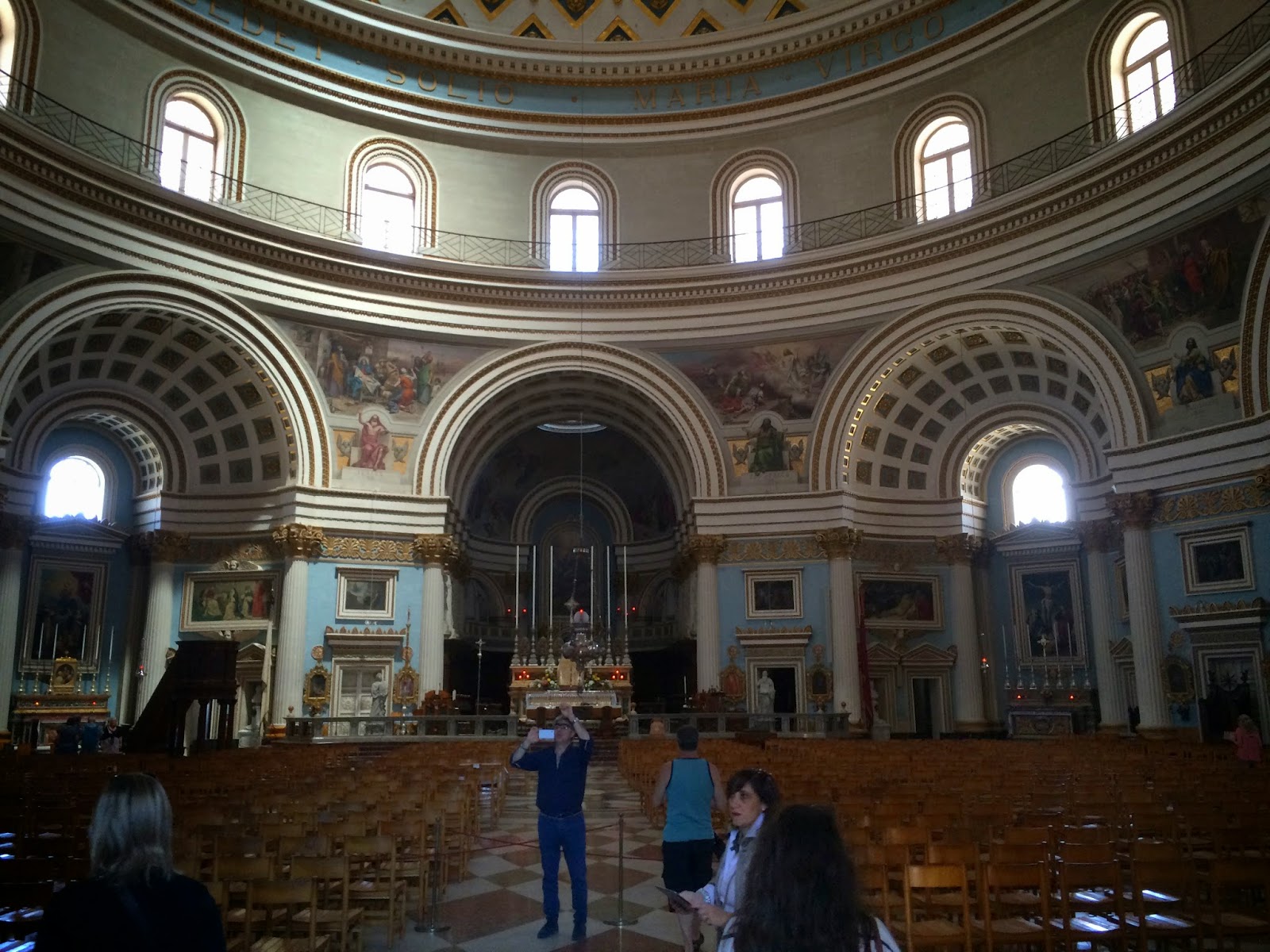 After this, we jumped on the next bus and headed for Mdina.

The TV-series 'Game of Thrones' is partly filmed on Malta and Mdina is used many times, like the entry to the city: 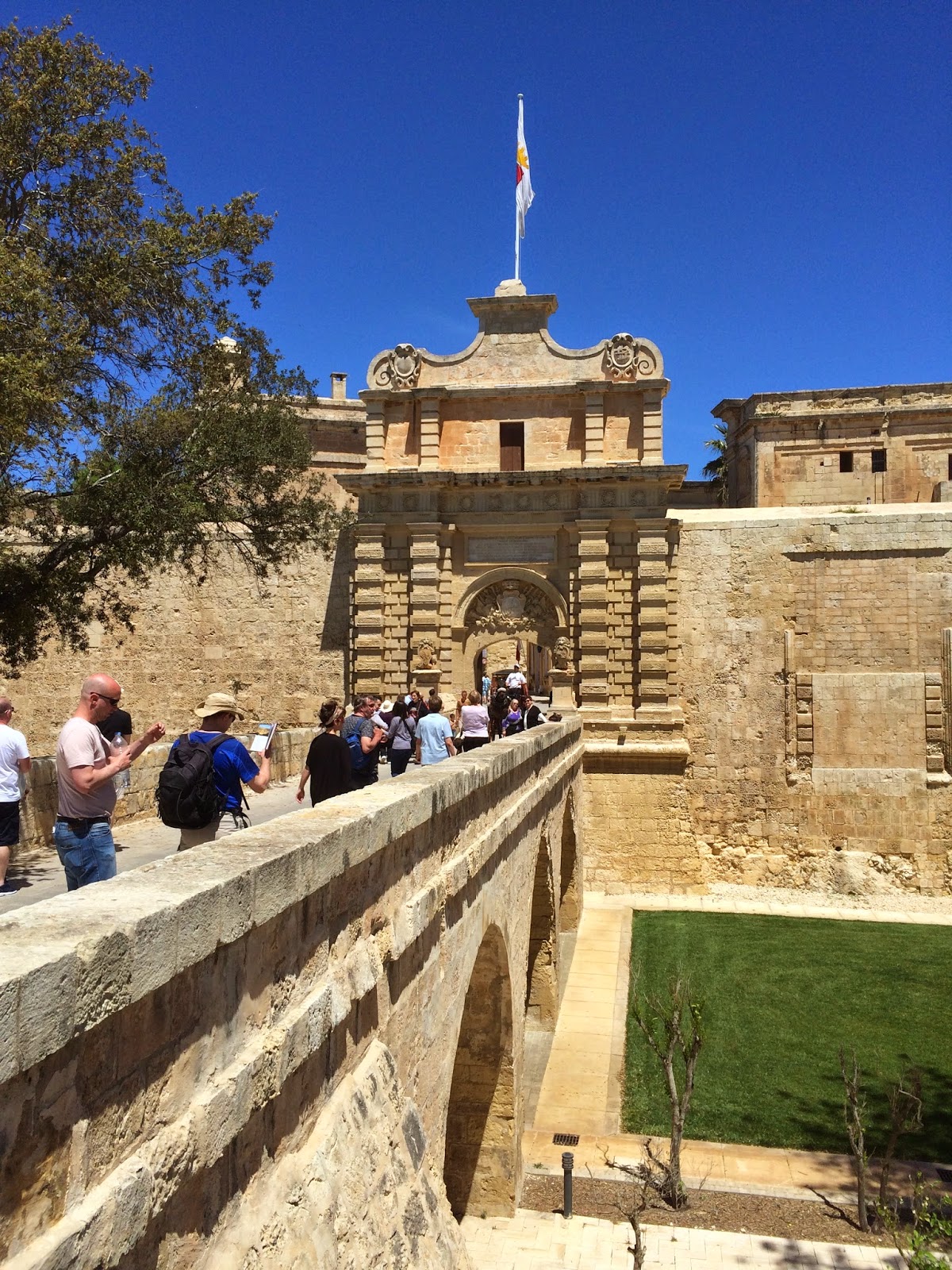 We walked around in this honey coloured old city and got lunch at a restaurant there. 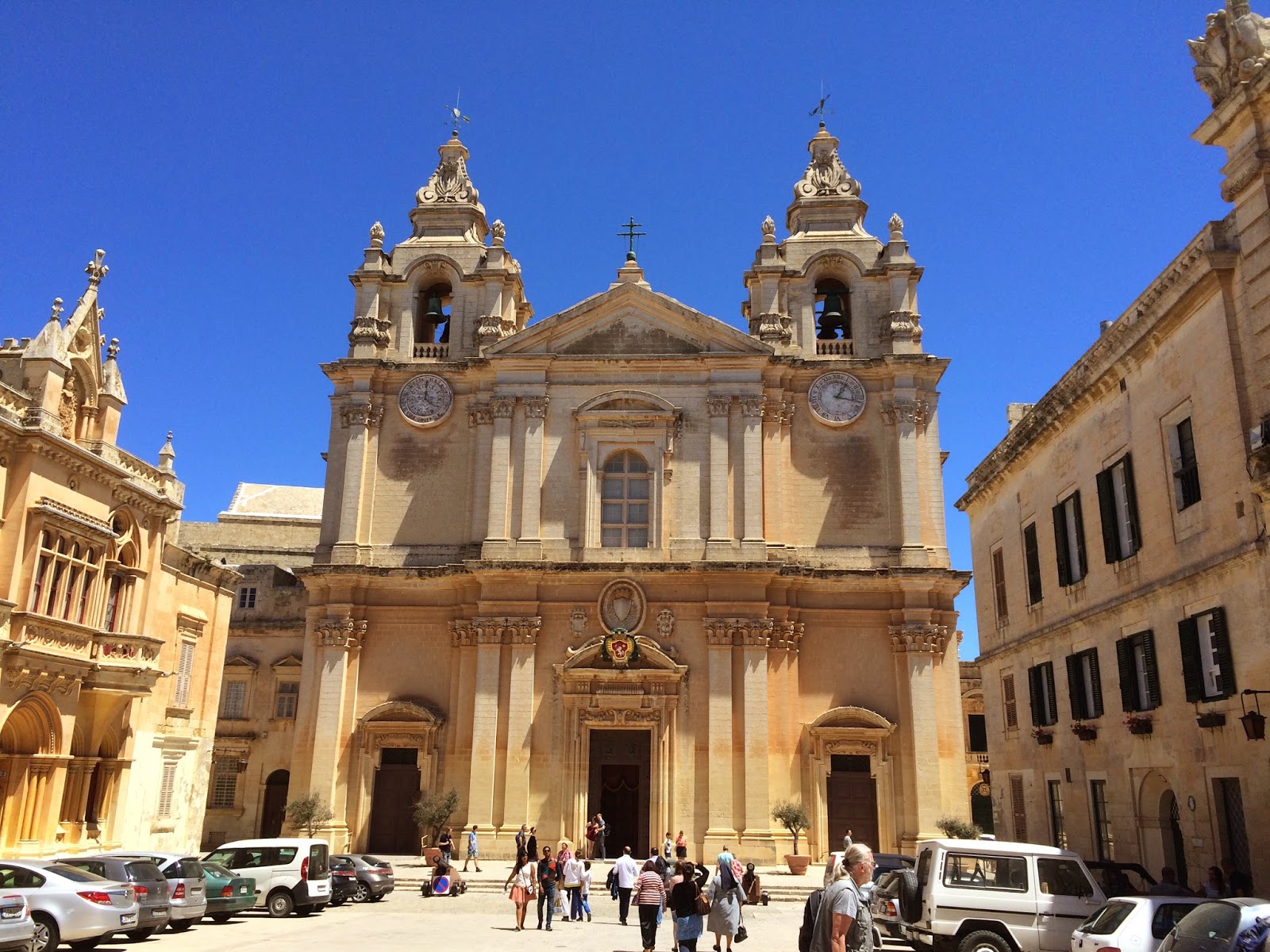 Mdina is on a small hill and the view was very nice. You could basically see most of the island from up here. 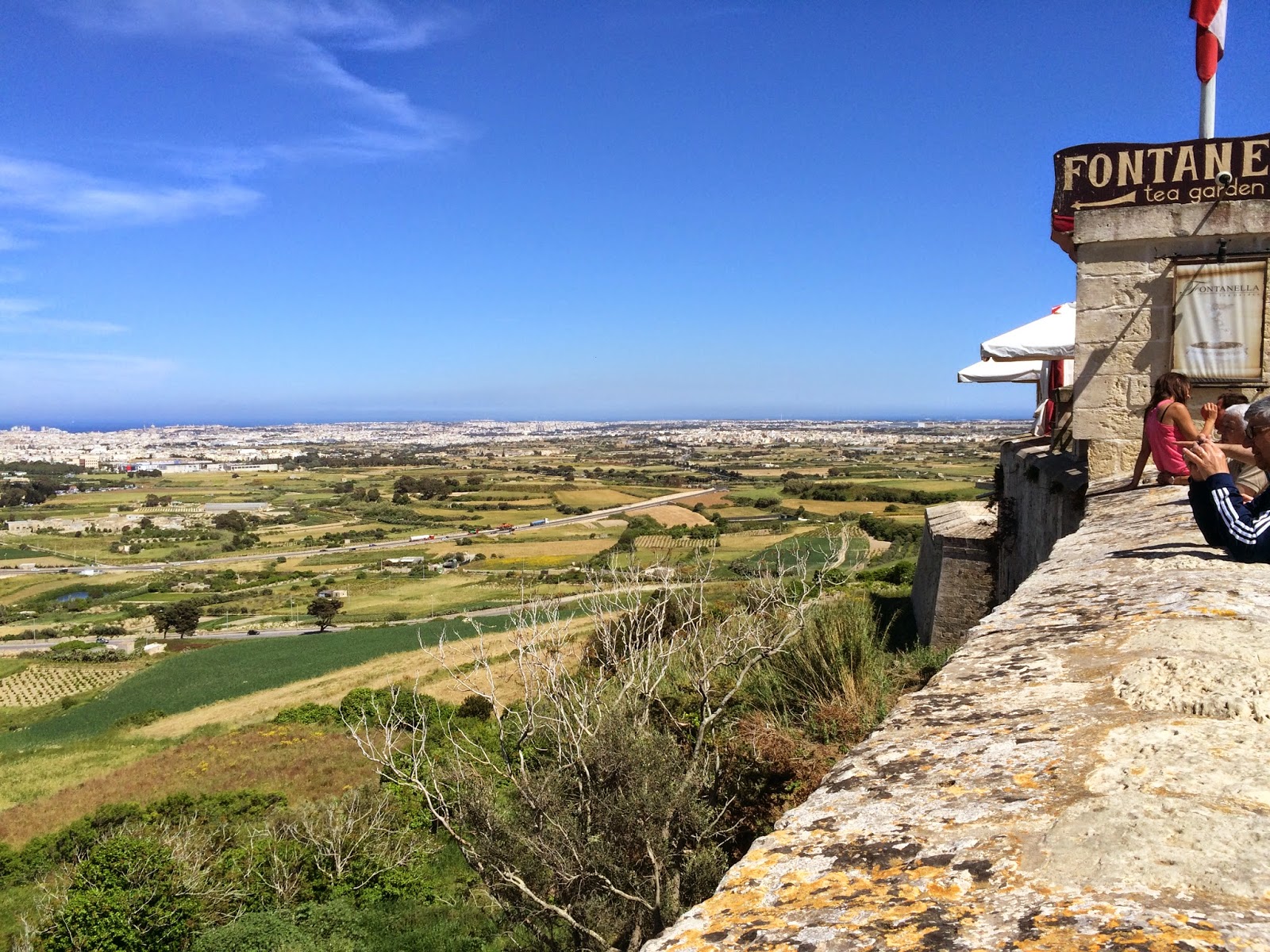 We checked out a museum called "The Knights of Malta" which was a pretty OK exhibition, although it's focus was on the time between the Turkish siege of Malta to the French taking over the island.
I would have liked to see more about the forming of the Knights on Malta.

After Mdina, we ended up in Valetta (again). The plan was to see Malta's 100-ton cannon, one of two existing (remember the other cannon from my visit in Gibraltar?? :)
Unfortunately the bus never came and we didn't want to wait one hour for the next. Maybe tomorrow instead!

So instead we got back to San Julien and the hotel.
The dinner that night was at the Waterbiscuit - the very nice hotel restaurant.
Posted by Halo at 6:26 pm No comments:

Woke up - and it's my birthday!
As far as I can remember it's the first time that I am on a trip when this happens.

They also have shows where the birds (and the falconers) show off their skill. Unfortunately it was too windy so there was no show today.

But we did get to meet met the birds anyhow in a private showing.
Some of the larger birds were not used for training and were just kept in large cages, but the ones we met up close included several hawks, eagles, owls - and of course falcons. 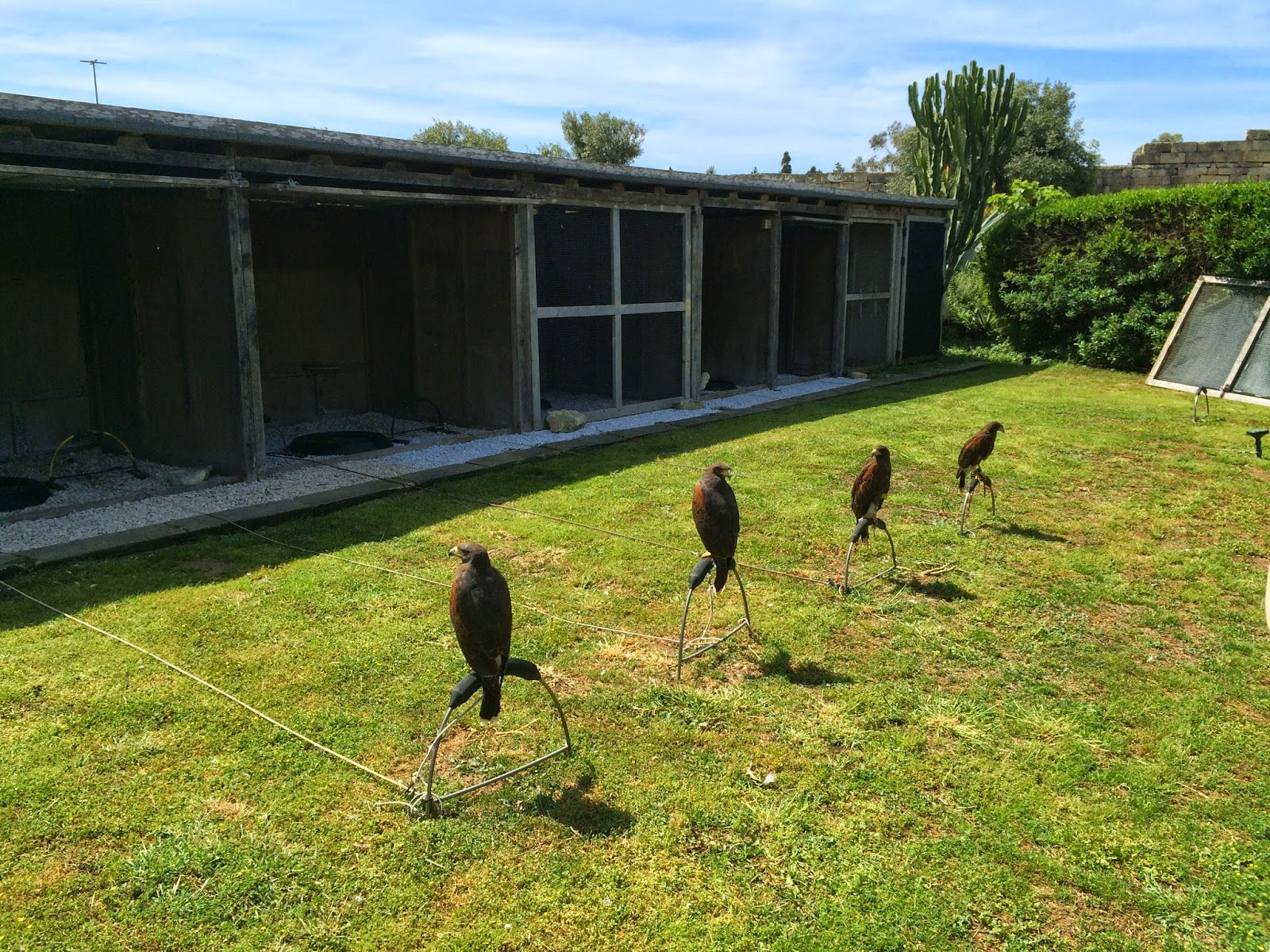 The also had a very affectional vulture - hatched at the centre. 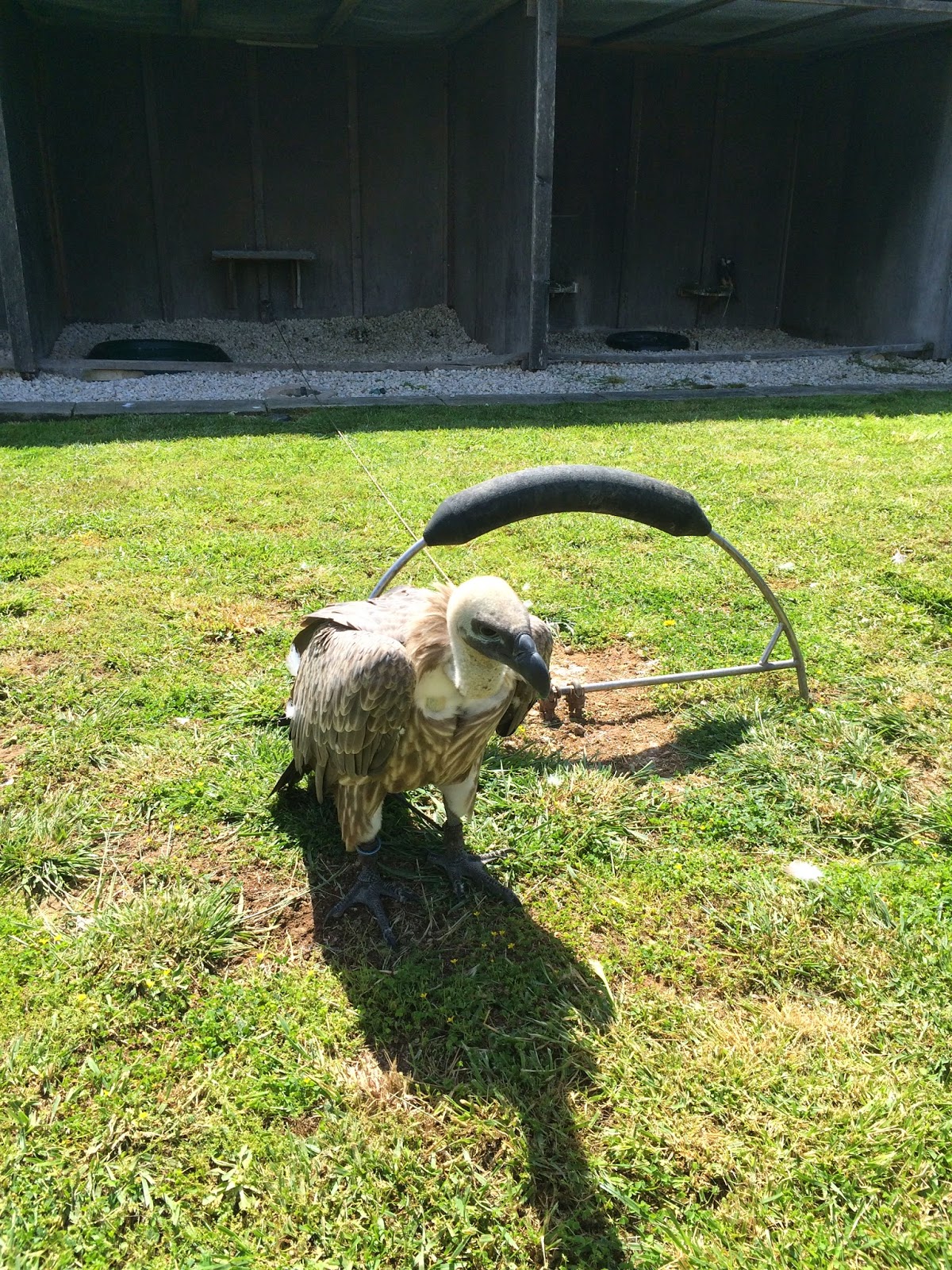 The owners of this place were very caring of their birds and the birds they trained seemed to have a good life.

We also got to hold some of the birds (sitting on our hand) - and pet them. They liked that! :)

Here is me with an owl: 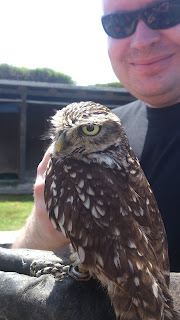 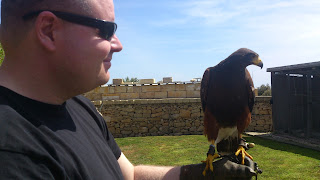 Also: here is picture of an proud hawk (sitting by its own): 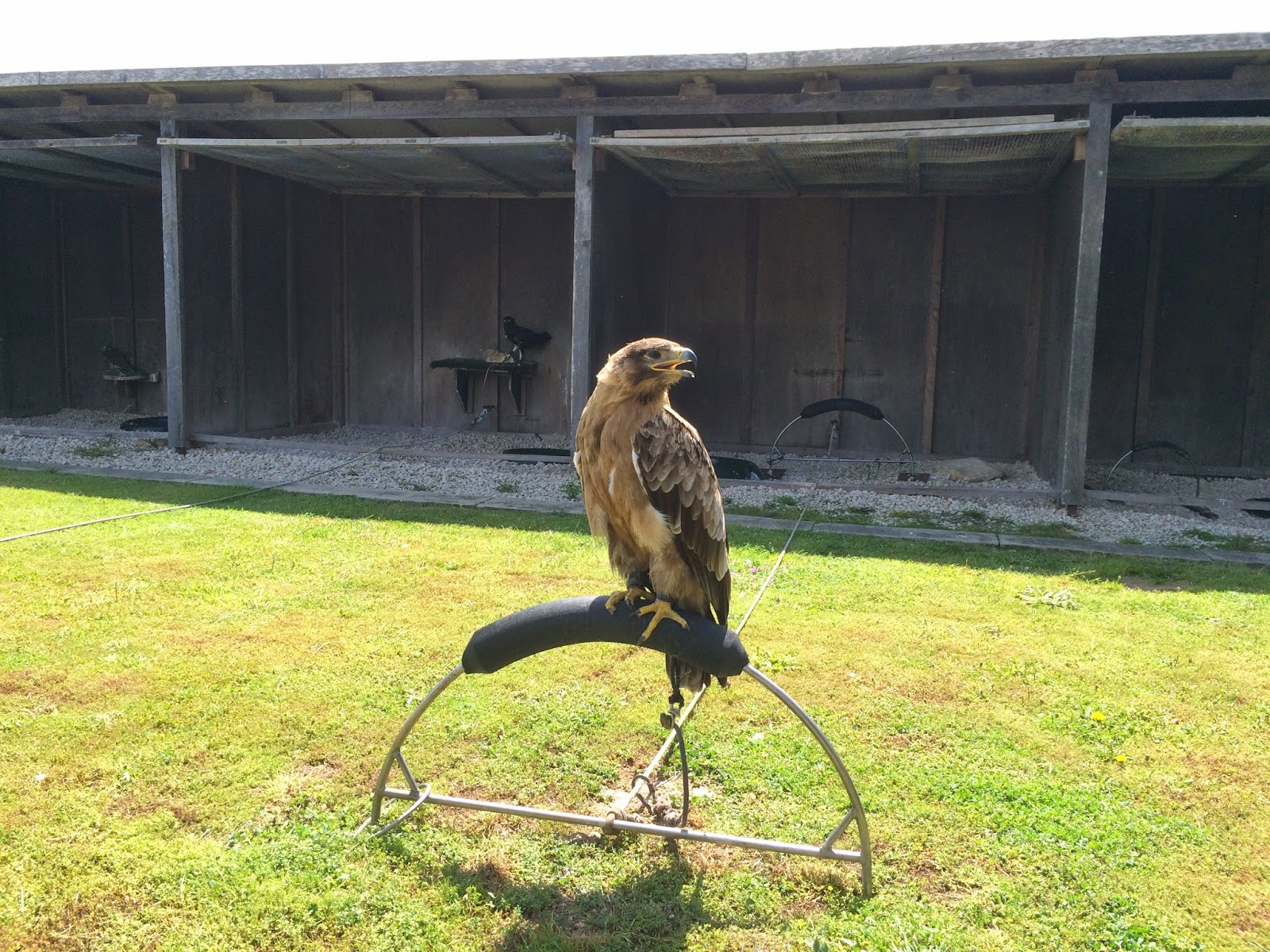 After this very interesting place we continued to the coast and to the Blue Grotto (also featured on The Amazing Race!  ;)

Close by there was one of many watch towers on this island. The massive threat of invaders tends to get these towers built. 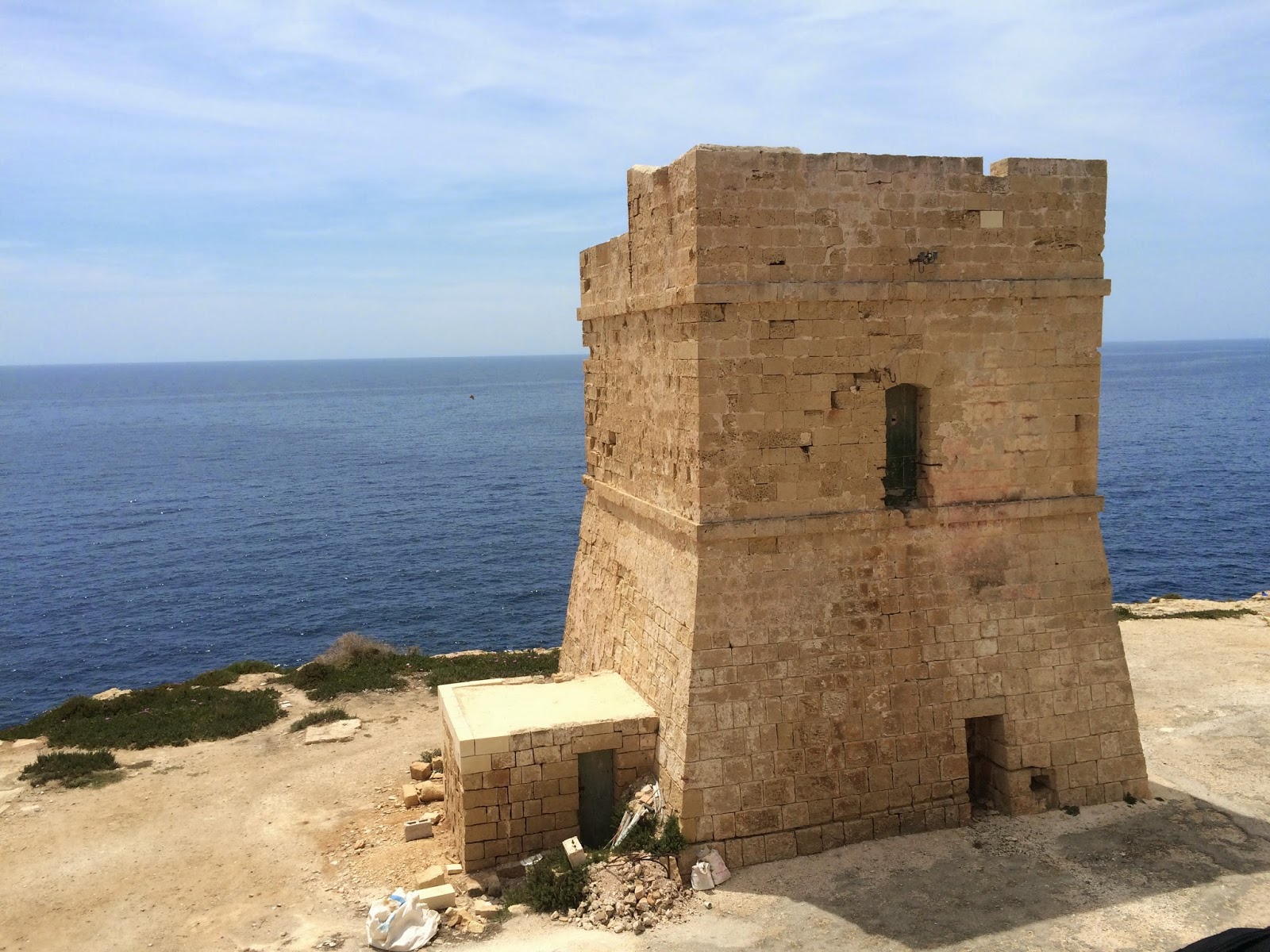 After some lunch with a beautiful view of the Mediterranean Sea, we headed down to the harbour where small boats took us to the caves along the shoreline. 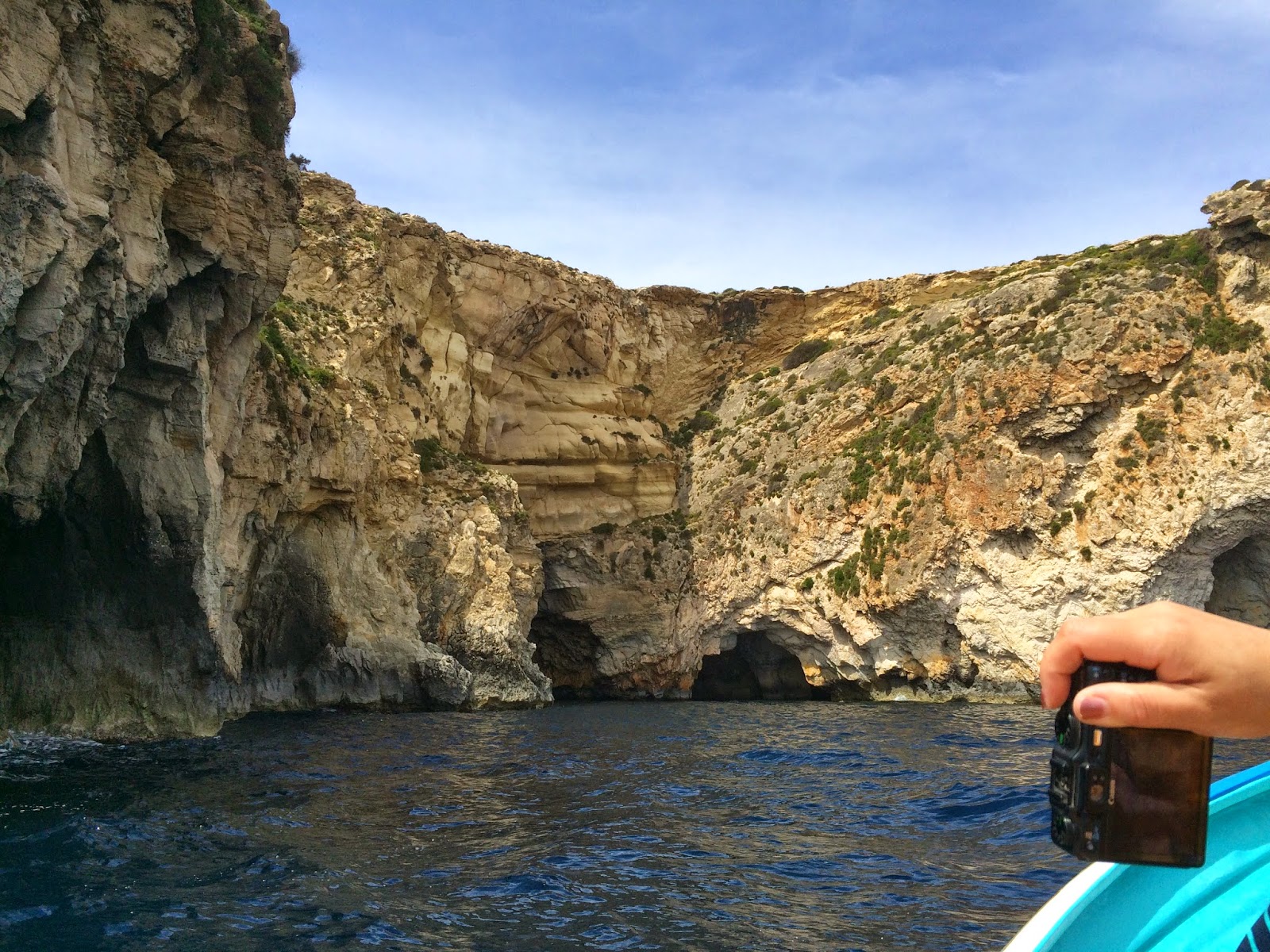 We went into some of the caves with the boat and you could really see the blue water: 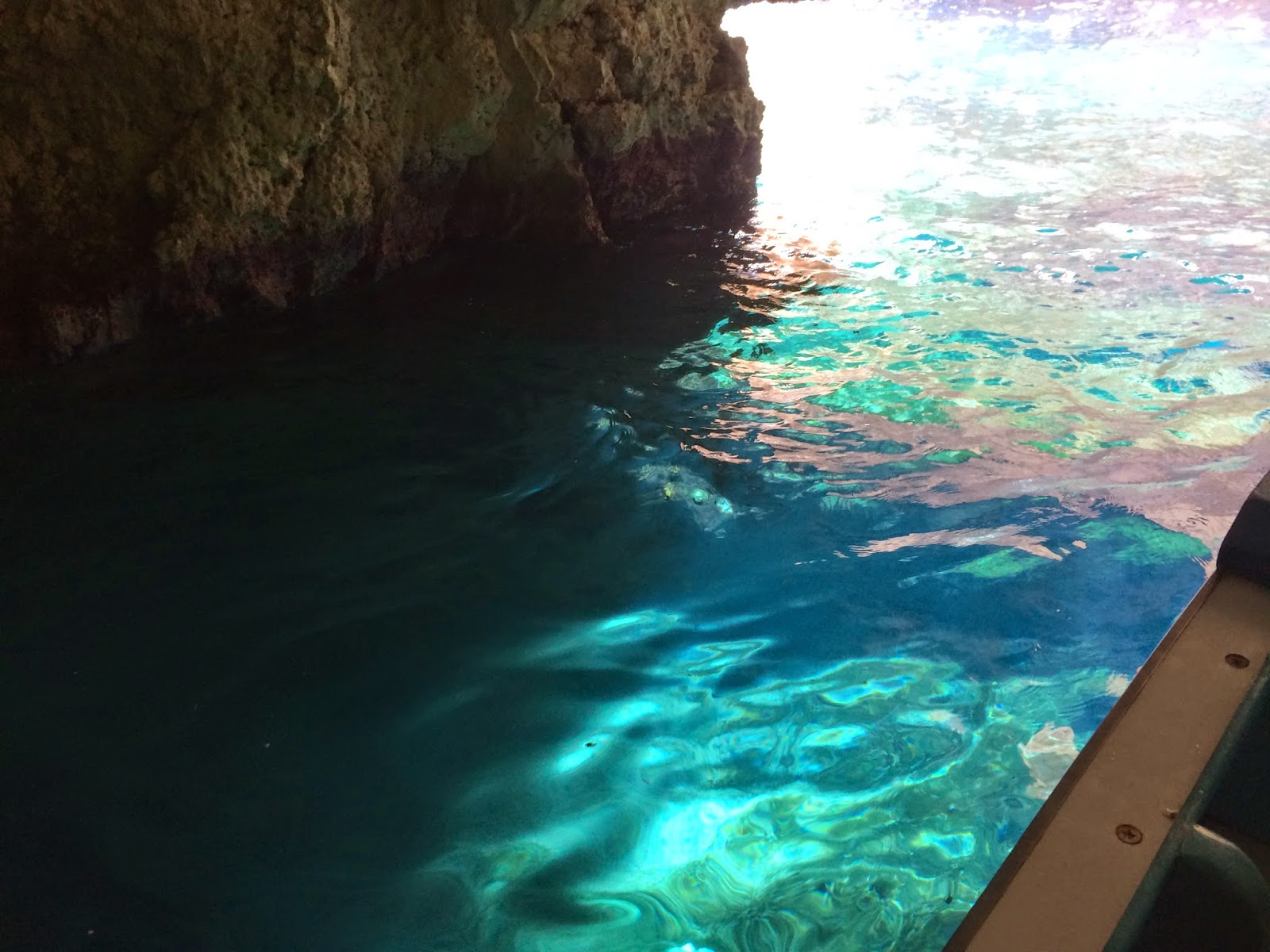 A few other spectacular colours could be found on the cave walls: 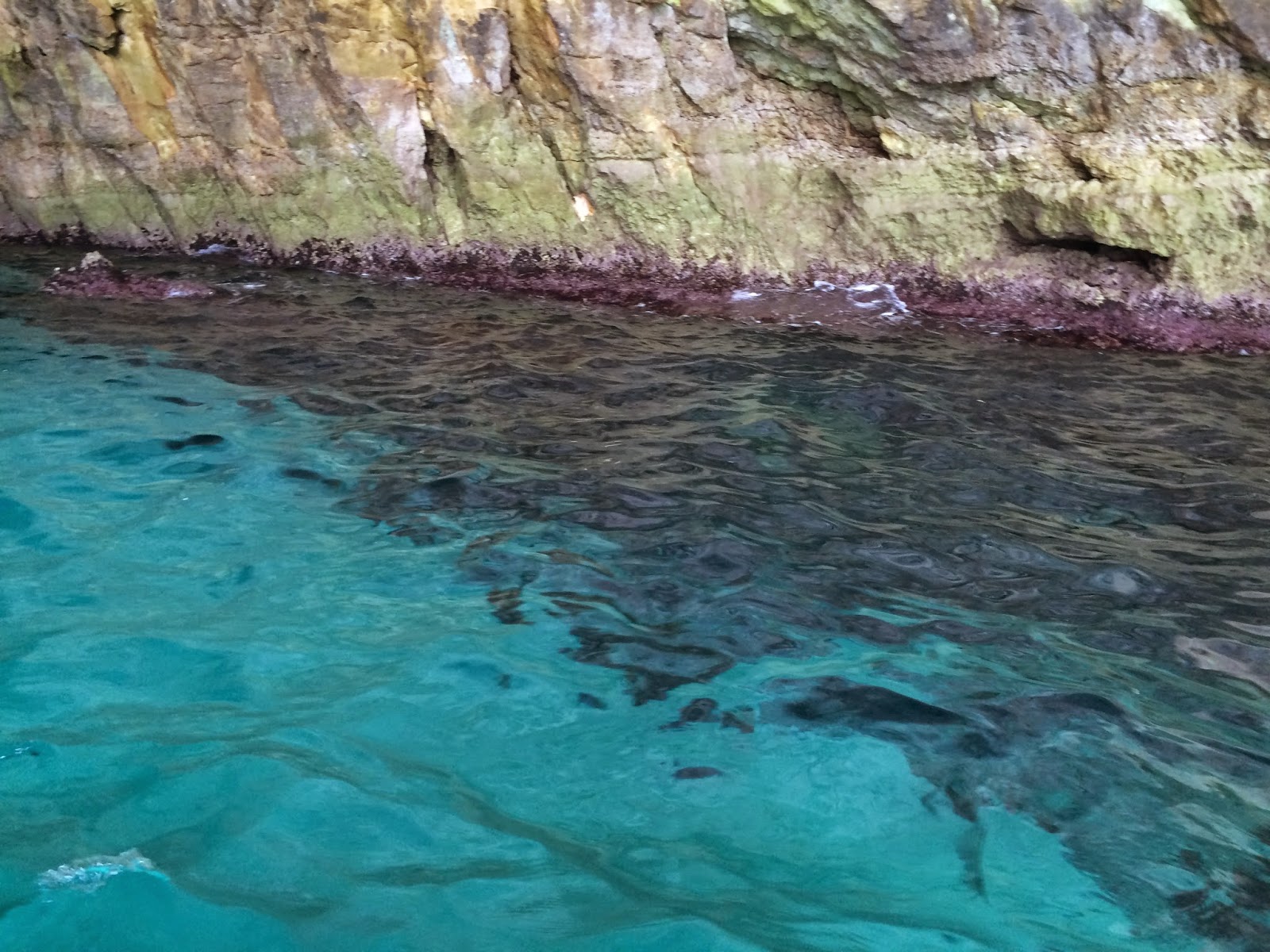 After this - on the bus again and towards the town of Paola.

We intended to see Hypogeum, a subterranean structure dating back 5000 years. Let me say this again: FIVE THOUSAND YEARS. That is about 1000 years before the pyramids.

Unfortunately you had to book ahead to be able to go in there (and it was currently fully booked for the next two months!) It also cost about € 30 to go in there. Expensive - but it was (probably) exciting stuff.

Instead we went to the Tarxien Temples a few hundred meters away. Its oldest part is also around 5000 years old, but this was in a more open area (as opposed to Hypogeum which was located in a house! - I guess the site was dug out underneath the house?)

Anyhow; this is how it one looked: 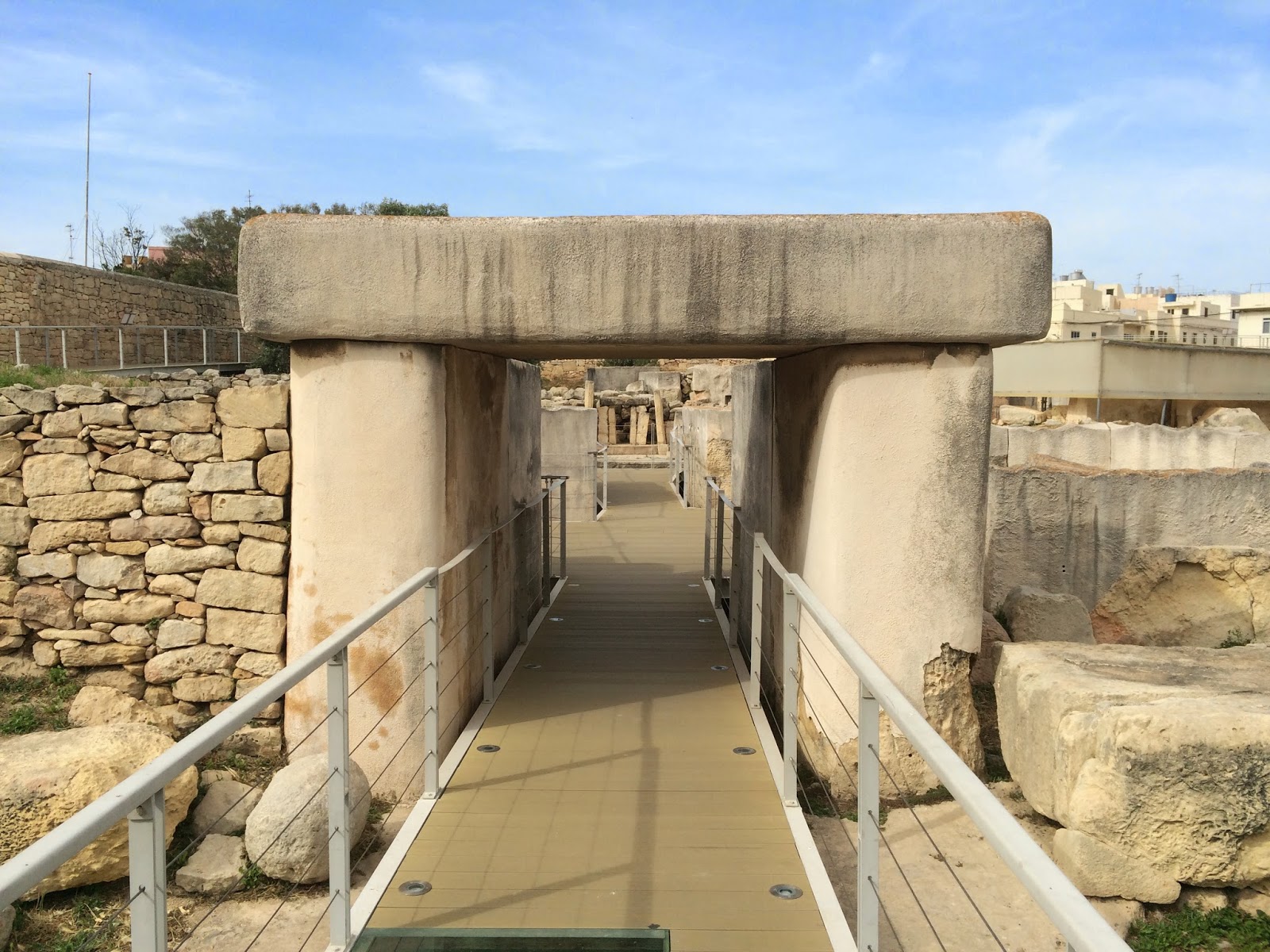 Note that some stones (the ones that looks remarkable undamaged) are replicas made after the temples were discovered.

The site consisted by several temples from different ages. 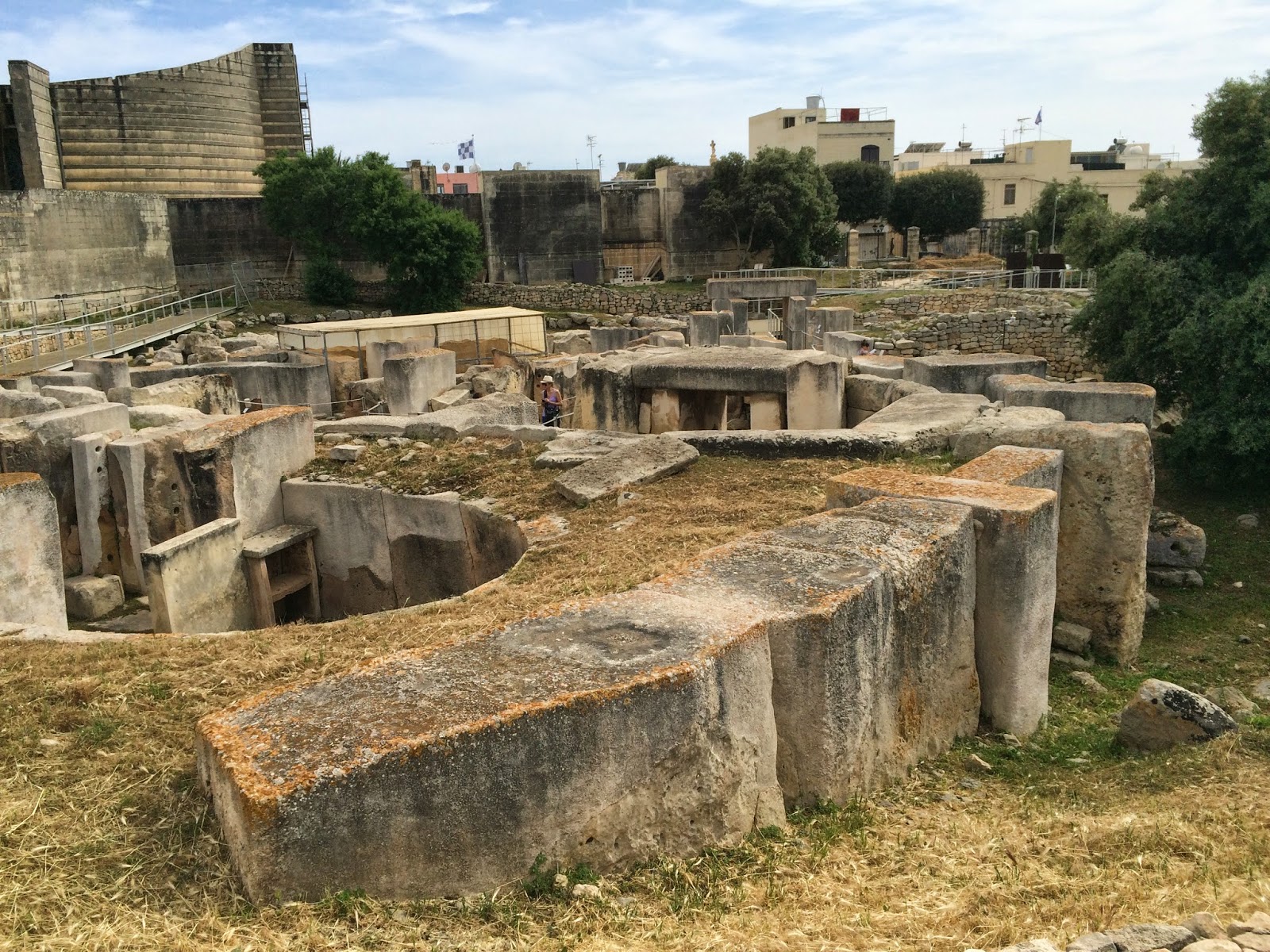 After this, we aimed for this cannon I wanted to see yesterday (but never did).
However while waiting for the bus, we discovered that the fort where it's at, closes at 5pm (and it was a 4:45 when we saw this) so there was no way we would make it.
And to make matters worse, it was closed on Sundays = I won't be able to see it. :(
And that's one of the main things I wanted to do on Malta! Bah!


Anyhow, instead we headed back to the hotel. Once there I got a surprise; in my room there were some chocolate and a bottle of sparkling wine!
The hotel had noticed that it was my birthday and gave this to me along with a Happy Birthday card!

Today the dinner was to be had at a place recommended by a friend; Meat & Co.
The food was good, especially their La Classica Tagliata. Fantastic!

I heartily recommend this place, but make sure to reserve a tables on their balcony. We were in luck and got one of these table without reservation.

Good food with a lovely view! 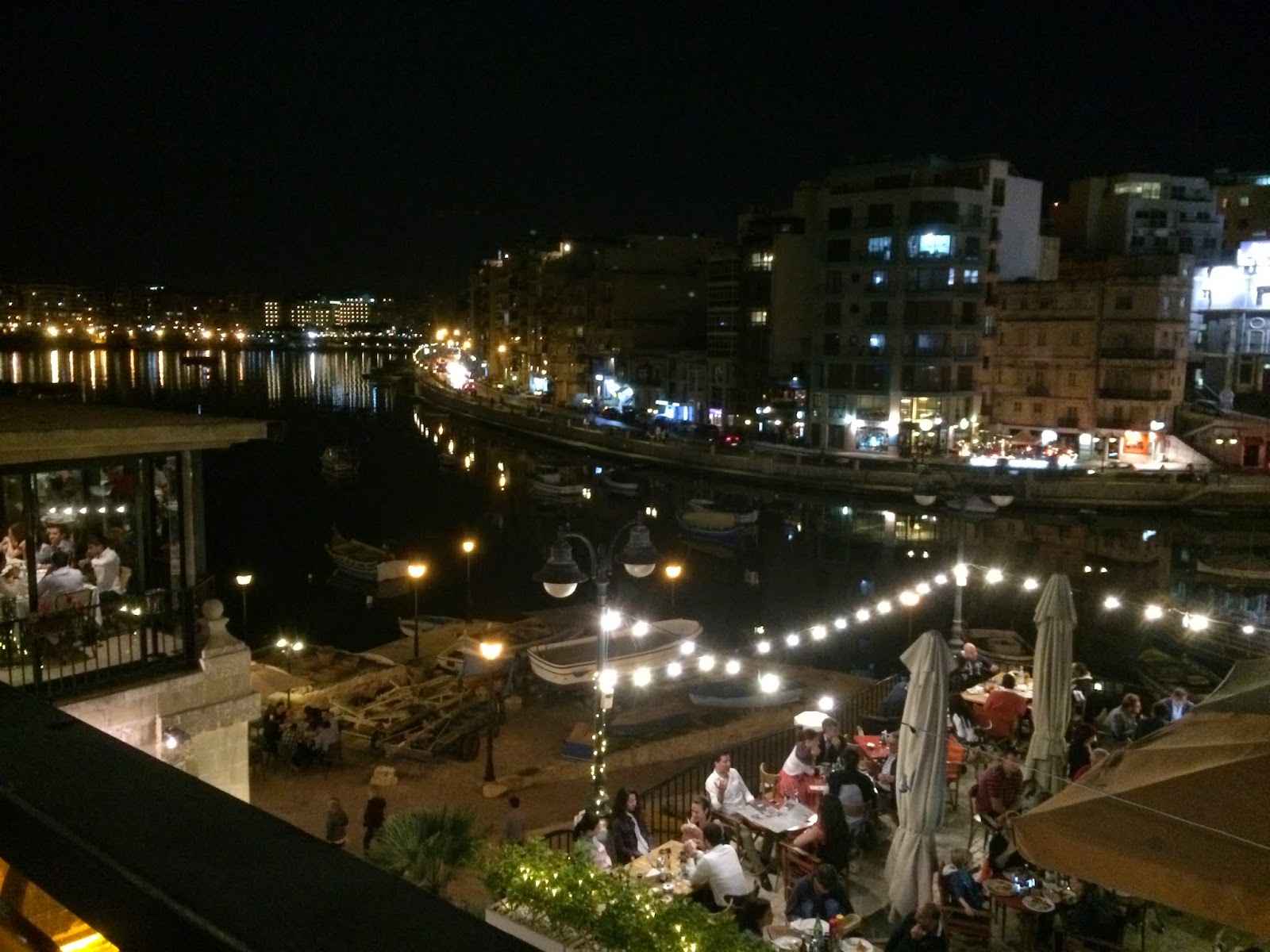 Today I also wanted to get this dip in the ocean-thing done with (can't visit Malta without taking a swim in the Mediterranean, right?)

So we went to the small beach close to the hotel and jumped in for a few minutes.
There were more people on the beach, but we were the only ones actually swimming this late. The water was cold. Brrrr.

After this is was back to the hotel again.
Tomorrow is our last day here.
Posted by Halo at 9:57 am No comments:

We didn't really have any plans and the things we came up with, we didn't have time with.
So we ended up reading by the pool.

Pretty relaxing, which is apperently one way of spending your vacation.
However a few hours is enough for me. It's warm here!

Later on, we headed for the airport. This time we did not have a direct flight, but had a transfer at Frankfurt.
After several hours homebound we finaly arrived at Landvetter late in the evening.