After a nice hotel breakfast, it was finally time to see the 2000-ish year old city of Petra!

After the entrance, we walked for a little while before we came to "As Siq", a 1,2 km long and narrow gorge in the mountain. 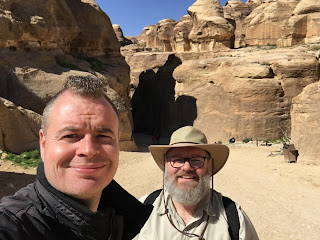 This was a really cool experience. It was no less than 3 meters at the narrowest place and most of As Siq was filled with interesting carvings on the cliff sides. 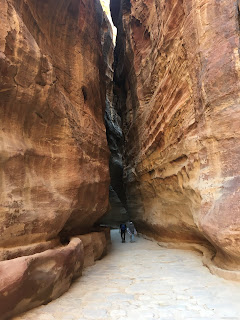 At the end of As Siq, we could glimpse something up ahead... 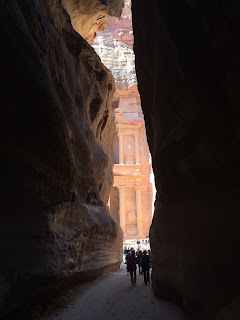 ...and there it was; The Treasury, the most famous facade in Petra 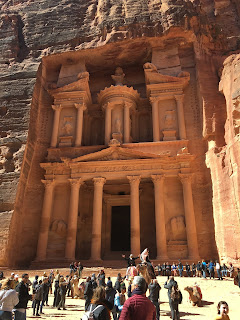 The sight was magnificent!

And being here, I could finally say I have completed the New Seven Wonders of the World!
It was a great feeling!! :D 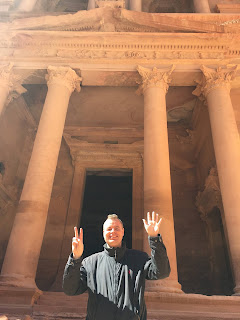 But The Treasury (al Khazna) is far from the only thing here; in fact, it is only the beginning!

We walked along the Streets of Facades and took in the feeling of this old city, which had once been an important hub in the trade routes of its time (Europe-Middle East-China).

There were many tombs and houses carved into the sides of the cliff in this street. 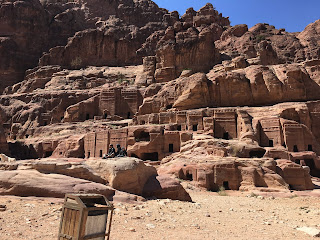 There was also a theatre which could take thousands of people. 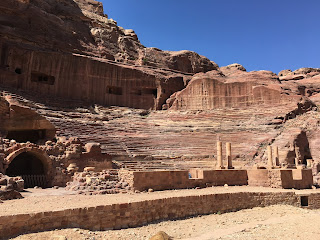 Littered around the street (and most of Petra) were a lot of people selling souvenirs and plenty trying to convince us to take donkey or camel rides. None of the animals seems to have a good life - so naturally we did not take them up on the offers.

At the end of the Street of Facades we could see The Royal Tombs. 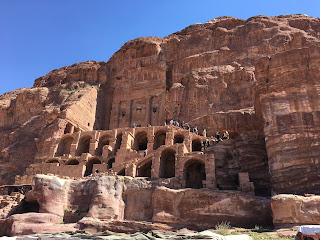 Of course, we went up to take a closer look - and to go inside them. 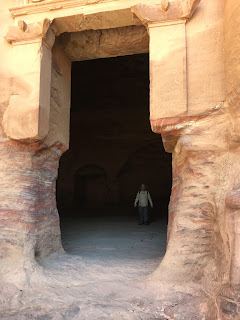 Moving now over the centre of Petra, where one could imagine the busiest part of the city would have been.
A fairly flat area surrounded with mountains.

Here lay the Great Temple. A large building (not carved into the cliffs) at the height of its day. Now just ruins.
Still a mighty place to walk around in. 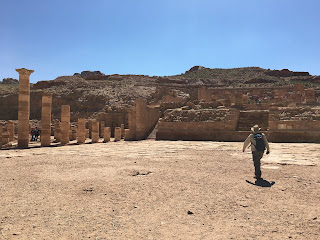 After taking a short break at the "five star" restaurant here (we didn't eat here, but it looked far from five stars), we started walking up the 800+ steps to The Monastery. 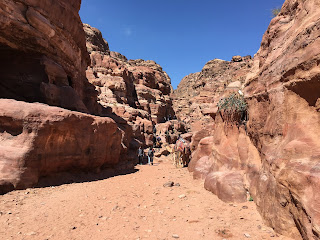 800+ steps do seem like a lot, but it felt like more.
Hardly any steps are nice and even, the route also included plenty of flat ground.

The sun burned from above, while a chilly wind made sure we kept our jackets on. 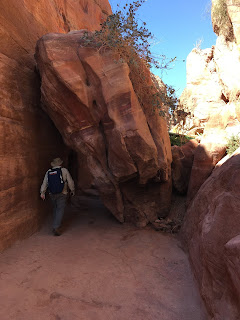 Finally, after about 1 hour and 20 minutes, The Monastery (ad-Deir) rose above us. This is the largest carved monument in Petra - and it sure was big!

One cannot be anything but impressed of what they built here so many years ago. 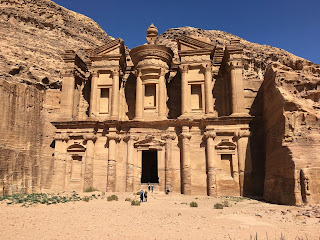 Just like the Treasury, no one were allowed to go inside, but the room inside is really not that deep. 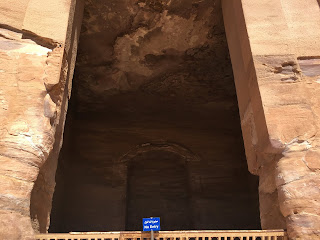 Sandstone might be easier than granite to carved in, but I guess it does have its limits.

We stayed here for a while before going back down again - and we walked all the way to the hotel.

It was a rewarding day, finalizing the Seven for me - so now we deserved some relaxing at the hotel room.

Later we had some dinner at the hotel restaurant The Cave Bar.
Posted by Halo at 4:53 pm

Congratulations Patrik to the great achievment! Now, when you have completed the New Seven Wonders of the World, what will the new travelling goals be?? :-)

I must say that the narrow gorge on the way into the city may have been the best part! I mean, I like big facades chipped out of the rock as much as anybody, but the gorge was a wonder by Mother nature herself.

The horses seemed to be handled ok. The camels? It was unclear. But clearly the poor donkeys were not handled well. Very sad to see.

The trek up the mountain to the Monastery was fun, we did a lot of walking that day! Yay to us.

The best parts of the small rooms behind the gigantic facades, as the case with the Monastery among others, were often the ceilings. The structure of the rock was visible and it was really beautiful.

Not sure what my next big travelling achievement will be, but i nthe meantime, I have plenty of other "Travel-ToDos" (see list on the right). :D