We had a very empty schedule today.

The bus back to Israel wouldn't pick us up until 15:01 (it was only departure time they had) so we just relaxed, watched TV shows and read for a bit.

About an hour or two before the bus was arriving, we got an email stating that the bus would be late. New estimated time of departure was 16:00 - and at another location (not outside our hotel which was the previous plan).

We went to the designated place well before 16:00 - and waited.
After a while we found someone from the agency and we realized that the day-tour hadn't even come back from Petra yet - and they were supposed to eat before the bus was departing. >.<

So in the end we left Petra at around 17:00 (after experiencing full chaos when everyone was trying to board the bus at the same time), two hours later than expected - and even the original time was much later than we wanted!

The sun was already setting as we started the long drive back through Jordan. 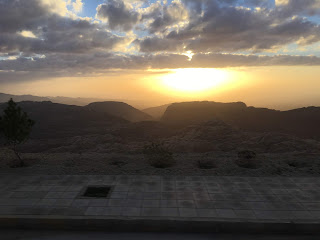 For some reason we stopped for a 20-minute break before we even reached the border, prolonging the trip further.

The border crossing went fairly smooth though, it took "only" about 35 minutes. We left the border at 20:00.

Our destination was Tel Aviv, but of course the bus first had to do an unannounced detour to Jerusalem - and the airport - before we finally came to Tel Aviv, where we took a taxi to our hotel (the Prima Tel Aviv Hotel room #207).
We got there at 02:00. And straight to bed.

It had been a tiresome day, with a lot of waiting.
Posted by Halo at 3:47 pm

The countryside of Jordan was very nice to see, similar to Israel of course, but with the mountains.

The crossing of the borders were uneventful, but still I felt a little more safe, sort of, when we were allowed back in into Israel. :-)

Arriving in Tel Aviv very late. A pity, I would have liked to spend some more time there, but that will be for another time!