Today I had a time to keep!

My plan is to go and see the Spanish Riding school perform and to make sure I got a seat, I had pre-ordered a ticket a few weeks ago (probably a wise decision since it's usually sold out).

I had to go around the school to get in through a side door so make sure you are there a few minutes earlier than you planned (the entrence is dependent on where you sit).

I saw their "Performance B" and it was a delight. The show was divided into five different performance:
First there were four young horses (4-6 years) and their riders who showed the basic moves.
Then came six older horses (+ riders) that performed moves from the "high school of riding".
After that three different shows with strict coordination to each other and the music; a single horse/rider, two horses/riders and finally eight horses/riders. 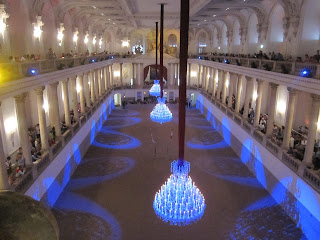 I sat on the 2nd Gallery (~ top balcony) on the short side of the scene. I got a nice overview of the whole show from here, but maybe(?) 1st gallery is better since it closer to the horses. Just make sure you don't get the "boxes" behind the seats at the sides (I am guessing these are the "Standing places" in the price list but I am not sure). It looked like it would be very hard to see anything good from there anyhow.


After this it was time for some Bond hunting!
I went to the Volkoper, which was stand in for the Opera house in Bratislava where Kara was performing (and played the role of sniper during Koskov's escape).
Here we have the Volkoper;
In 'The Living Daylight': 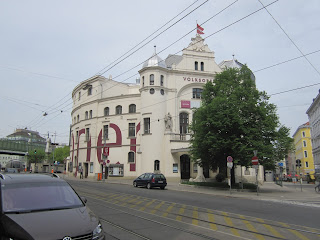 And Koskov escaping through a window (circled):
'The Living Daylight':

This is the window!: 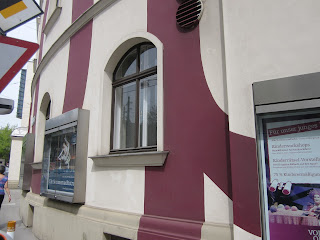 Also: Kara as a sniper (circled);
'The Living Daylight': 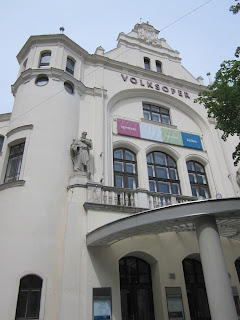 Then I of course also visited the "sniper book shop" on the other side of the street, from where Bond makes his "kill" on Koskov's sniper.
It was a candy shop back then - and still is - although with different owners. 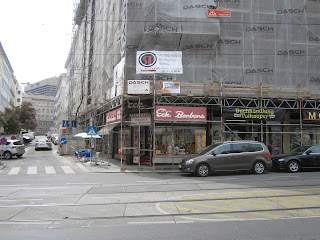 (too bad they are renovating the building)

And now it was investigation time!
I wanted to find the building where Kara lived. All I had was information that it was filmed in a part of Vienna called Gersthof and a vague idea how the house looked (I forgot to bring pictures from that part of the movie - and the movie itself).
After a small adventure on the tram (going in the wrong direction  >.<  ) I got to Gersthof.
And I looked.
I walked and walked and got on every tram they had in that area, but it was all in vain. I never found it.
Also the life of a obsessive fan. You don't always get the girl scene. :(


Anyhow; moving on to more cheerful events! (not really)
The next thing on todays agenda was a visit at the Vienna Zentralfriedhof, the large cemitary in town.
After a long ride on the tram I got there and saw the graves of such composers as Beethoven, Johann Strauss (I & II) and others (most of them was in Group 32A) - plus the main reason I was there; to see the final resting place of Falco (Group 40, number 64). 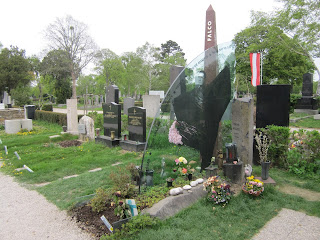 Interestingly, his grave had more flowers (mine included) and memorabilia then all the other graves I just visited together. I guess many people still remembers Falco.


Then time for one last Bond hunt; the hotel he and Kara stayed at according to the movie; Palais Schwarzenberg. I found it, looked at the front and realized, no, this is not it.
So I went to the backside of the house (which took about 20-30 minutes since it was a loooong wall around the (Belvedere) gardens and... no - it's not here either.
So - again - I did not find it. Either they put the "Palais Schwarzenberg" sign on another building - or they have changed the house a lot in the 30 years that has passed; who knows?

The end result is still; I didn't get the scene. Disappointing to end the weekend with two Bond losses, but I have still found a lot of others so I think I am satisfied enough. For this trip anyhow.

Then I went to TGIF for some food - and the "Eissalon am Schwedenplatz" for some ice cream (I recommend it!) and then back to the hotel.