I have one final item on my "Travel To Do - A List" - and it's about time to finish that list off.
Today I am heading for Vienna (or Venice as it's apperently called in Swedish), a city I wanted to visit for some time now - not sure why, but I have the feeling it's a city worth checking out.
I flew there via Berlin and got to Vienna International Airport in the afternoon.
I choose not to take the speedtrain (City Airport Train), instead I took the ÖBB, which turned out to be a bus. It was about half the price, with not much loss in time (although the traffic stretched that time a bit).
But it wasn't really that bad and I finally got to Vienna (the stop was called Schwedenplatz so that's not bad either).

It's really hot here, around 27 degrees. I didn't expect that (my bad). I probably should have brought some shorts with me.

I then took the U-Bahn to Stephanplatz, where my hotel was. I didn't find my hotel right away so I walked around the Stephanskirchen (which is located in the middle of Stephanplatz) 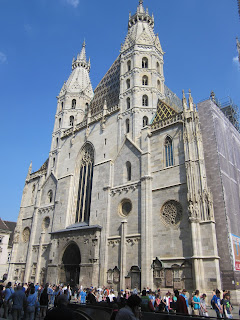 After walking 358 degrees around it; I found my hotel (which was simply called "Hotel am Stephansplatz").
It was a nice hotel, very much into eco, fair trade and similar things - I like.
I got room 303, which looked like this: 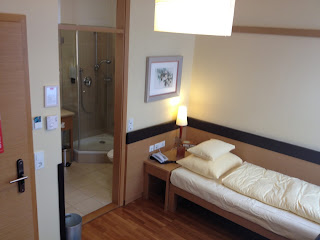 I can even see Stephenkirchen from my window.  :)
I didn't stay long, instead I walked out again, looking for:
1) A tourist information, which I could collect different leaflets and
2) a restaurant to eat and look through the leaflets mentioned in 1)

I found both and start looking for things to see I didn't already have on my list while I was eating my wiener schnitzel (what else?). I also had the Austrian version of potato salad, which wasn't that nice. But always fun to try.
After the stomach was satisfied, I went to see my first tourist-thing.
And I might be the first tourist ever in Vienna to start with this one; the Gasometers.
The Gasometers are old gas tanks (four of them) which is now converted to a mall + offices and apartments (at least it looked like it).
It was also the site where General Koskov was taken in the Bond movie 'The Living Daylights' to be put in a Harrier aircraft and whooshed away to England after escaping from Russia. 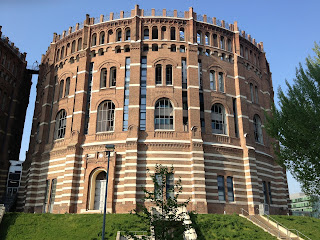 I couldn't quite make out the angles from the movie, since it was filmed in the dark (or more likely had a "night-filter" on the cameras), but I did easily recognize the buildings. 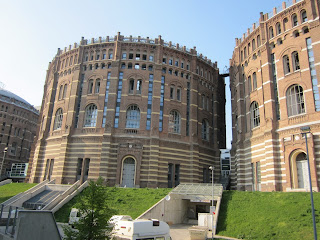 So the experience was a good one, but far from orgasmic.
I hope to do better at the next location I'll be visiting.

After I was done at the Gasometers, I walked around a little in Vienna and stopped by the hotel for a bit before I went out for some dinner.

Now I am tired, I need to get ready for more walking tomorrow.
Good night!
Posted by Halo at 11:14 pm

I can totally relate to this as an old Bond fan! Last autumn I also had a look at the Gasometers together with Volksoper (featured as standin for Bratislava opera house) with the "sniper bookshop" on opposite street, along with Schönbrunn (featured as hotel) and Prater (the Ferris Wheel scene). Also don't miss the locations from The Third Man: Palais Pallavicini, Am Hof and more. Have a look at my location photos for inspiration: http://minkmachine.reine.se/2013/01/movie-locations-around-the-world-part-2/

The other Bond locations you mentioned is of course on my list.

Expect them in the upcoming blog posts!