Gibraltar has been on my short list of Places To See for quite a while and this year I got the opportunity to go!

Seems you need to transfer at London to get to Gibraltar (I didn't want to take route via Spain - I wanted to land on the small landing strip in Gibraltar!) so I headed west and got myself a day in London as well.

There is one flight per day from Heathrow so I stayed close by at Radisson Edwardian Heathrow: 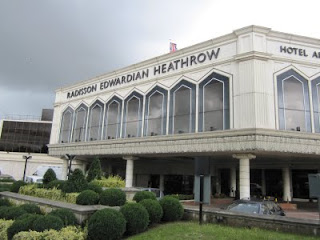 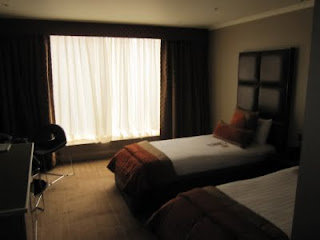 After leaving my luggage in the room I headed for London City.

Unfortunate there was some work on the Piccadilly line this weekend, which meant I had to take the bus, change to the Underground, take a shuttle bus and then take the Underground again to get to London. Which took about two hours. :-/

Anyway; straight to Camden, found some baby boots I bought plus a few records (at my favourite Camden stores; British Boot Co and Resurrection Records).
Then, of course, Camden is an exit only at this certain time so I walked to the next station and went to another favourite; Forbidden Planet. Didn't buy anything, but always nice to be there.
Time for food! I ate some delicious meat at Angus Steak House and then for dessert at the M&M Store at Leicester Square - picking only black & silver candy of course.To further relax I went to see a movie; "Green Lantern" at one of the smallest cinemas I've been to. I must remember never to go to Odeon Mezzanine again (sadly I think I have told myself this before, but I had forgot about it). The movie was OK, but not an ounce more.

Now the time was about 8pm and time to head back, the same tube-bus-tube-bus route again.

Tomorrow it's time to see the Rock! (The real Rock that is, not the San Francisco prison)
Posted by Halo at 10:53 pm