Time to look back at my very quick, but fun, adventure in Cambodia.


First of all the format of the trip; I was only in Cambodia for about 48 hours - and spent almost the same amount of time travelling.
I would say it worked - as in it fulfilled my travelling plans; I got there, saw what I wanted to see and got a (quick) feel for the country + the flying itself wasn't too bad.
However as a vacation, meaning to get some rest and actually reload the batteries, it didn't work as good.
But, considering I wasn't away for long, it's hardly a surprise.

As for the sights I saw; Angkor Wat was majestic!
Dispite this, unfortunately it did not fulfil all my expectations of it (I thought it would be more in-cooperated the jungle), but it was close enough. I was not disappointed.
Ta Prohm on the other hand did the opposite; I thought it would be a cool place to see, but with only one or two trees invading the temple grounds. It was more than that - which was a blast to see! :)

What I never got to do was to ride an elephant. But considering the elephant rides I saw was going straight on a dirt road a few hundred meters. Not really a big deal (I have ridden elephants in a zoo - this looked just about as exciting). I am also uncertain about how they were treating their elephants. I tried to ask my guide this several times, but he never understood what I was talking about.


Now for Siem Reap and Cambodia as a whole; it is a poor country, there were garbage along the roads, a certain smell in the air, but the situation never hit me with a "Wow, how different"-feeling.
It was more of a "yes, this is how it is here, I've seen it on television". Very strange feeling actually, not sure I have ever had that before. Is television blunting our feelings for new experiences - and our feelings for people that have less than us? I don't know.

The traffic is worth a special mentioning. It wasn't bad, but the roads had a lot of mopeds and motorcycles (next to the great amount of tuk-tuks) - and safety, well... it wasn't a issue. At all. More like "...safety? What's that?"
I saw mopeds with up to five people on them - and mostly only one was wearing a helmet.
I saw mothers sitting sideways on motorcycles - carrying infants.
Sights like this was very common. I shuddered in my western "we know better than you" attitude and was constantly worried for the children riding so unsafe. 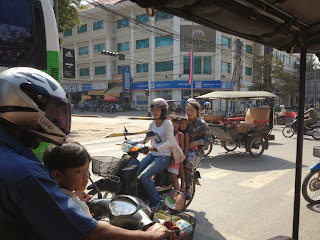 Now for my least favourite topic, but so necessary for a trip like this; spiders. I-do-not-like-spiders.
I know they are good for the ecosystem and everything, but I don't care. I can't stand them.
So I had a lot of anxiety for this before and during the trip. The things I imagined and the solutions to spider related problems I thought up...
Turns out; I never saw any big-ass spiders; I only saw two small ones (not that the size really matter when it comes to spiders, but I think can handle them a little better). The first one I saw, was in Angkor Wat. I was walking along inside one of the temples when I saw a tourist sitting on her knees photographing something. I thoughts was like "why is she sit... A SPIDER, RUN, RUUUUUUUN!!!!!!". And I ran for a bit (while at the same time trying not to look like a total idiot - I probably failed). But seeing a spider in a 900 year old building; not a shocker.
The other one was actually in the tax free store at the Siem Reap airport going home. It was crawling on the floor. I went out of the shop not buying anything.

Next topic; tips and tricks in Siem Reap!
* In Cambodia they use two currencies; the domestic currency called Riel - and US dollars.
If you are only going there for some tourism like me, US dollars is all you need. Everyone (at least that I came in contact with) takes it. I did get some Riel as change a few times (when it was under one dollar), but I never used it myself (so I put most of it in a charity box at the airport).
* Make sure to take a business card from the hotel. You will have great use of it when you want to go back to the hotel and your tuk-tuk driver hardly understands any English. Just show him the card - and hopefully he will understand (or at least get the proper directions from someone else).
* Angkor Wat is mostly a big open space. Make sure to bring water - and why not a hat to protect you from the hot sun!


Money!
This trip wasn't that expensive (considering I went to the other side of the world). The total sum was about 11.500 SEK.


All in all a fun, fast trip.
The concept of these trips has been proven sound, which means I will probably do more of them in the future.

And for all that are wondering - I got my bag back from KLM the next day.
Posted by Halo at 3:46 pm

Success! Great travel journal. I felt like I was with. I have ofcourse been there myself. You helped bring back the memories.

Reading about the spiders I thought I saw one in the corner if my eye. Scary, but it was only my own curly chest hair. LOL. My imagination got carried away...

I am glad it was only your imagination! :)