Woke up at 4 am, two hours before my alarm was set - so a small jet lag, but not as bad as I feared (maybe it'll get worse tomorrow?)

Had the breakfast buffet at the hotel which was very nice.

I had ordered a guide/driver that would take care of me today, showing me the temples I had on my list.
I got a guide and a driver (but the price for both were $75 which was still OK).

The reason for having my own guide was simply to make it easy. It would let me visit the things I wanted in the pace of my choice - and to inform me things I didn't know (not only on the temples, but also about Cambodia and some of the political things going on - not in the plan but he had some really interesting things to say - and he wasn't afraid to say them!).
It's also nice to have a driver so I didn't need to think about how to get from place to place. They also took good care of me giving me water and an ice-cold wet towel every time I returned to the car. Ahhh, the life worthy of a king!

At 8 am we set out and the first temple to visit was Angkor Wat - the reason I am here. 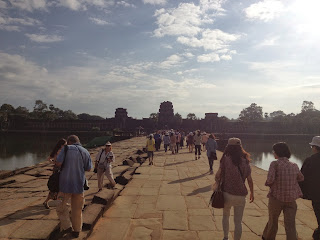 Inside the outer walls of Angkor Wat there were a large "park" with some different buildings - and in the middle; the main temple of Angkor Wat: 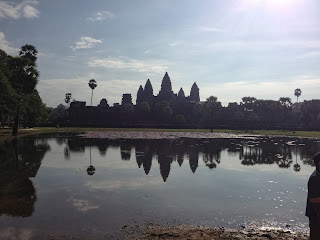 Inside this inner temple there were a lot of interesting things; like the "echo room", where you stand, leading your back towards the wall and thumped your chest. The sound then echoed in the (small) room. Very cool. 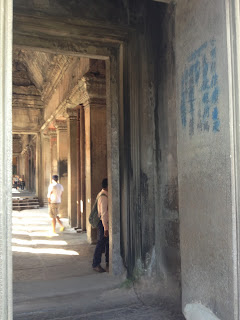 And here is the kind-of "inner-inner-temple": 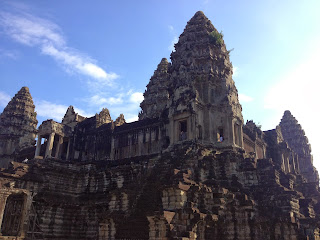 Walking up on a very steep stair took you to the top of Angkor Wat (my lazy guide never walked on any of these steps with me - there were a few over the course of the day).

The view here was magnificent. 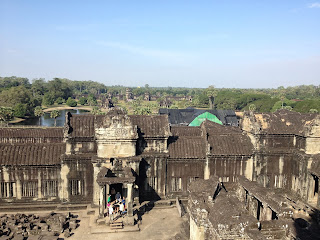 After Angkor Wat, we headed towards Angkor Thom, a temple complex a few kilometers from Angkor Wat.

First stop is the Bayon Temple, which is situated in the middle of Angkor Thom. It's known for it's faces - every tower has a smiling face on every side. 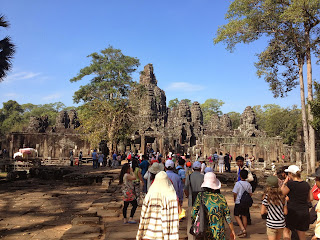 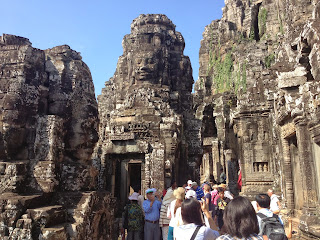 After this temple we walked around inside Angkor Thom to look at other buildings (which were more or less interesting - mostly less). One had a nice, huge Buddha statue though. Laying down and incorporated inside a wall: 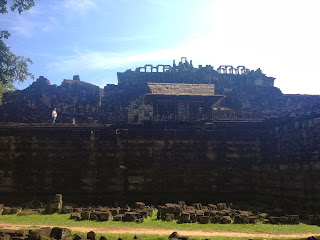 Then, finally, we headed towards another really interesting temple I was looking forward to, Ta Prohm! Here, the forest has taken over! Trees has grown over many of the walls and buildings. Very cool to see. 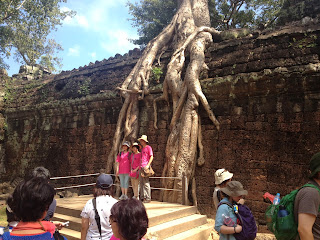 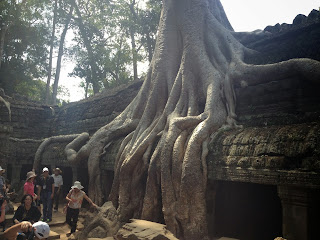 The temple area was very run down a few years ago, but they have started to restore it. 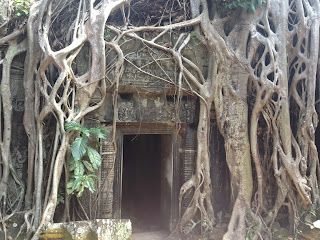 The place was so cool I could take photos all day long. 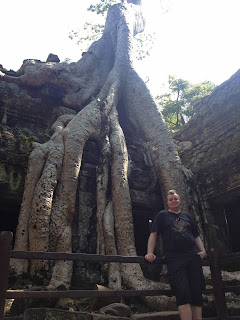 I didn't, but it was very fun to be there. A must if you ever go here.

After this, I had seen all the temples I had on my list - and my temple quota of the day year was filled up plenty, so I asked my driver to take me to down town Siem Reap. I wanted to see the town as well.
My guide took me through the market and also a little on the streets outside. 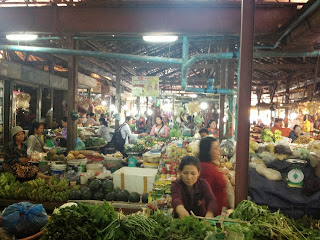 It felt strange to have them just waiting for me when I just wanted to stroll around and get the local feeling - so I told them to return home (even if I had several hours left on the clock).
The temple run had only taken about five hours. Much quicker than expected. I was done at 1 pm.

So I walked around down town for a bit, had something to eat and then took a tuk-tuk back to the hotel. 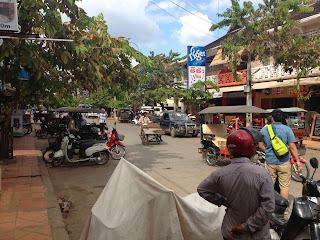 My plan was to get back out and take an elephant ride up a hill to watch the sun set over Angkor Wat - but I fell asleep and missed it (I figured I would, but I was so tired to really care).

But I did get out from the hotel around 8 pm for some food. I went to "Pub-street" (sounded suitable) and went inside one of the restaurants there.
It happened to be the 'Cambodian Soup Restaurant'. I got some food and a can(!) of the thai beer Chang. One sip of the beer and it went straight up on my top list - of worst beer ever drunk.
I naturally drunk it all.

After the food it was time for a dessert and I had already found it in a street corner earlier; a snake + some crickets. 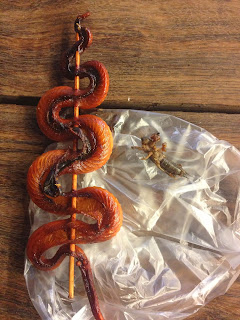 I thought (hoped?) the crickets would be fried and crisp - but they were just...warm.
I'll be honest; I only ate about half of one cricket (the non-head part). But the snake was alright, just hard to eat (you had to peel of the skin, which wasn't easy - and when that was done it still didn't have much meat on it).
Believe it or not, but the snake actually tasted like chicken.

Then I went to a few bars (including the one with the obvious name for this place: "Angkor What?"). Had a few beers. Nothing exciting. On the streets I had to fight off people offering me tuk-tuk rides and "boom-boom".
At ten I went to the hotel again. To my (non-)amazement the driver offered to drive me to boom-boom "very close to the hotel". Lucky me!
It turned that down as well.

Back at the hotel I opened the Cambodian beers (Angkor Extra Stout: not that good and Kingdom Dark Lager - semi-OK) and the different kinds of chips I bought earlier (nothing good so far) and wrote this post.
Getting drunk on the internet - my masterplan for the rest of the night.
Posted by Halo at 5:47 pm