A day in clay


I was making another business trip to China the other week and this time I had a transfer at Xi'an.

By going one day earlier, I manage to get one day there so I can go and see the Terracotta warriors at Emperor Qin's mausoleum.
It was fairly easy to get there; you just take either the 914 or 915 bus from the big bus station outside the train station at the northern city wall.
It was 8 yuan and you paid it to the conductor onboard the bus.

At the mausoleum (hard to miss the stop, everyone goes off the bus there), it is pretty big; you had to walk a little bit to get to the entrance.
There was a big statue of Emperor Qin close to it - so keep an eye out for that (or just follow the signs :) ) 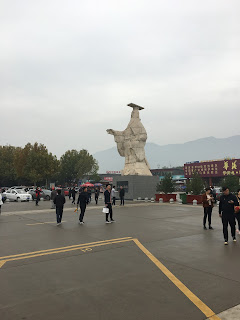 Once inside, I walked to the main attraction; the first pit - the famous one:

Some fun fact; the warriors does not look the same. There is a multifud of differences like the face, clothing ears and hairdo. Amazing the work that was put in this - more than 2000 years ago! 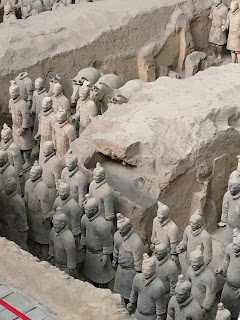 On the side there are one row of warriors facing outward (and backwards at the back) to make sure there are no surprise attacks. 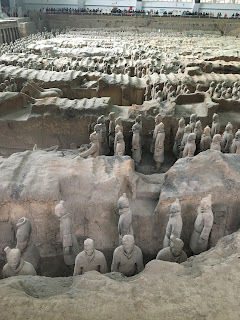 There are about 8000 terracotta warriors here, but far from all has been excavated - or put together for that matter. All warriors found are broken into pieces.
The emperor after Qin raided the mausoleum and took all the weapons made for the terracotta warriors - and they broke them all for good measures. :( 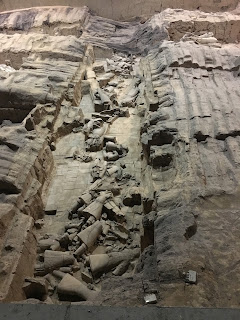 After this I went to the two other pits plus the museum here.

I went back to town with the same bus - and walked around in Xi'an city. On the wall and then to the bell tower. But that story won't be told here (and is really not interesting at all).
Posted by Halo at 9:43 pm No comments: