Todays activity has been debated a lot in my head and since I really want to see Mount Fuji, I decided to go on this whole day tour to Fuji & Hakone.
Unfortunate it was not worth it (due to the weather).

You couldn't see anything really because of all the fog, rain and clouds.
It mostly looked like this: 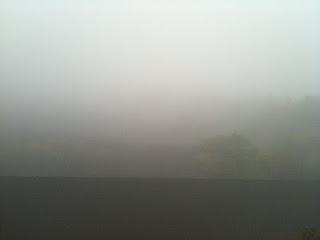 But unfortunate you could not see more than 50 m in front of you so while I have been on Fuji, I can't say that I have seen the mountain properly. Very frustrating. :(

After this we went towards Hakone and had lunch at the Hakone Lake Hotel.
The view from the restaurant was great. Or should have been if we had been able to see anything.

Then at Hakone, we took a cable car (Hakone Ropeway), which also were suppose to have a great view of the Hakone area, but... :(

We came to the Owakudani, which has a lot of sulfur cave and such (and the smell that comes with it).
If you are observant, you can make out the sulfur clouds from the normal clouds here: 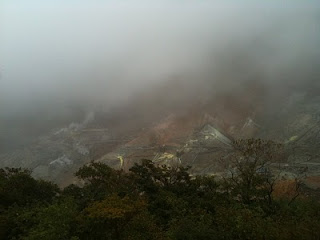 Then it was time for a cruise of Lake Ashi - in a pirate ship.

Now, I never could figure out the connection with pirates on a Japanese lake, but I am sure there was one.


And to add to the whole strangeness (absurdness?) of this, we went with a ship called "Vasa". 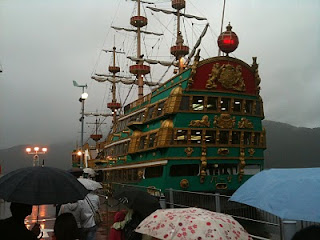 Yes, that's right. For some weird reason they modeled and named the ship after the most famous ship in Swedish history.

I wonder if they know the story of the original ship, which probably was the greatest fiasco (not to mention embarrassment) of the Swedish Navy?
(For you foreigners, you can read the story here).
I did go on board, but it was not with ease in my heart.

The ship ride (about 35 minutes) was OK, but it rained so you could not be outside for very long. 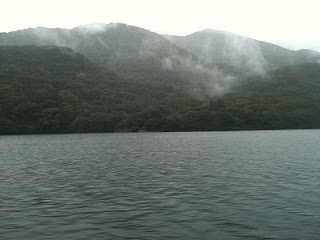 And the fog was still there, making sure you didn't get to see too much of the view. 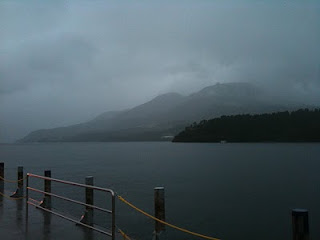 After this, the bus headed home. Came back to the hotel around 19:30.
I finished Count Zero - and started on the last book in this trilogy; Mona Lisa Overdrive.

Last night here in Japan. Time to do some packing and stuff.
Tomorrow awaits 21 hours of travel to get home. Yay.
Posted by Halo at 2:20 pm