Found a fun thing last night; I have buttons on my bed that opens & closes the curtains to the window! I wanna stay here for a long time! :)

And now for a not so funny thing; somehow my phone got under a pillow during the night and I didn't hear the alarm = I overslept and missed my slot at the Ghibli museum. :(

So now I will have to buy a new ticket - and I bought one for tomorrow. At 16:00 just so I don't oversleep tomorrow as well.
Unfortunate this also mean that the few things I have left on my ToDo list here in Tokyo got squeezed in tighter. And that tomorrow will be a day filled with running around to have time for it all.

Anyway, here's a little something for you to think about;
Why does the numbers elevators in Japan look like this? 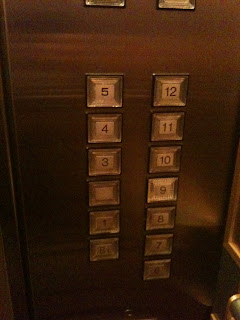 At least I think that the first example is how it looks at home.
The Japanese way make me have think a microsecond longer than normal so I think it's different anyway.

OK, back to business.
Since I all of a sudden had a half day off, I just strolled around in Ginza - and bought me a little something at the Sony Building, which has a four story showrooms. More stuff to weigh down my already too-heavy luggage...

In the afternoon it was time for the theater to see some kabuki! 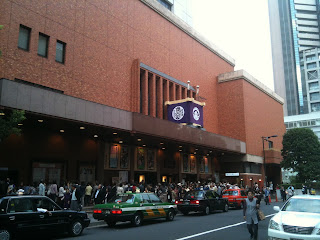 A picture of the Shimbashi Enbujo Theater where I went.

Not the best picture below, but taken during the play: 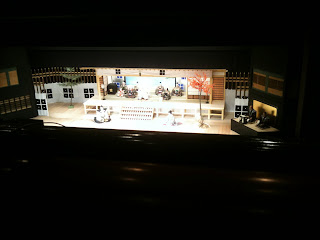 It was fun to have done it and it wasn't too bad. But without the special "earphone-guide" in English it would have been impossible to understand the plot or what happened on stage.