Something I have been noticing a lot here in Shinjuku is the many young couples walking around - and several hotels renting rooms not just per night - but also per hour.
I get the impression that Japanese youth go here and have sex in the hotels (since they are still living with their parents).
If this really is true, I don't know, it's just a feeling I get.

Anyway, headed out to the Edo-Tokyo Museum, which is in a very different building that some say look like a AT AT, but I personally think it looks more like a Space Invader. 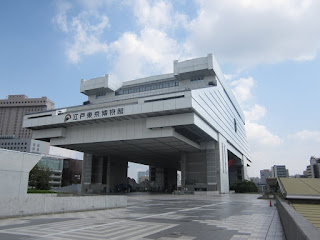 The museum shows how the small fishing village Edo got to be the capital in Tokugawa's Japan, how it grew and changed during the centuries and at the Meiji Restoration was renamed to Tokyo 1868. 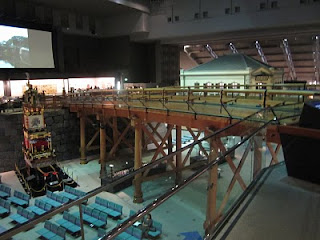 There were also exhibitions about 20th century Tokyo (like the western influences, Kanto earthquake 1923 and the WWII bombings).

After this I walked a little in Tokyo City 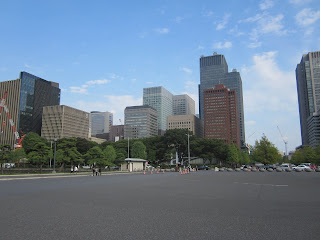 and then went to the Imperial Palace and its gardens.

The main part is closed, since the emperor lives in here somewhere: 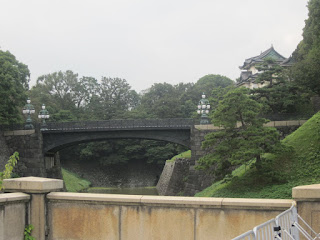 But the Imperial Palace East Gardens are open to the public. 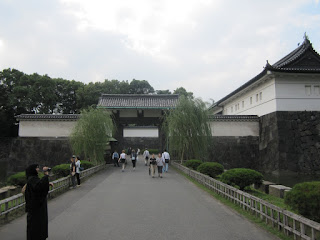 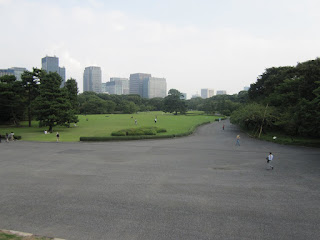 and maybe a bit nicer in some areas. 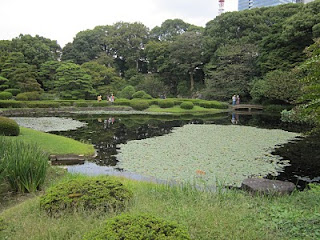 You could also see the walls and moats from the old days when the Shogun (and later the Emperor) lived and conducted their business here.

Then it was time to head back to my little hotel room again.
And here the Shinjuku station hits again! Now, I don't normally have problems finding my way, but this station is just insane. If I ever get to be overlord of some sinister organisation, this will be the first place I will destroy so they can build it up again - and this time do it correct.

So I went from the station to the hotel. And figured after a while that something was wrong. And no map could set me on the correct course.
I finally gave up and took a taxi. The trip took about 15 minutes (~100 SEK), but then I was at home at last!

But before getting inside, I bought a ticket to the Ghibli Museum, where I will go on Thursday. Only way to get a ticket is to buy it in advance. And that can only be done in a ticket machine - where all text is in Japanese.
Seriously, you can not understand a thing. Fortunate, I got a clerk to fix the ticket for me.

Anyway, back at the hotel, quick dip in the pool and then I figured I try some massage.
Now, I am not sure how you imagine Japanese massage, but in my best dreams it goes like this; a beautiful young Japanese woman (preferably naked) walks with her small feet on your back and you are having the time of your life.

That was not what I got...
I had a female sumo wrestler, who seems to have had some kind a trauma in her life where a Westerner had done something horrible to her or her family.
This was one of the most painful experiences of my life - I thought I would be finishing this blog with my mouth, paralyzed from the neck down.
It took me 10 seconds from wishing I had choosen the 30 minute session instead of the 60 minutes.
Afterwards, I had to feel that my eyeballs were still in their sockets and not hanging out of all the intense kneading.
Fortunate(?), but a bit surprising, was that the whole massage was done with me fully dressed (in the hotel pajamas that is) + some towels as a special precaution.

Edit a bit later about the massage for clarification; she pressed (hard) with her hands and elbows , more than a normal kneading. And she didn't seem to care that there were (unbendable) bones and especially vertebrae where she did her work.
She did tell me afterwards that she was from China. Does that mean this was not a Japanese massage? No clue - but I will not try it again to make sure. At least not on this trip.
Posted by Halo at 9:50 am