At Landvetter again and this time we could actually take off. 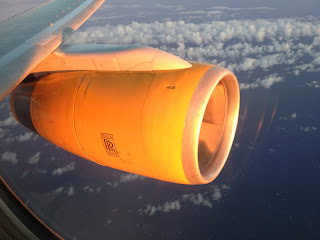 Picture of the evil engine

After about 2½ hours flight we landed on Island and Keflavik - and after a short wait we also got our rental car; a small Toyota Aygo. The time was just past 23:00 and we were ready!
The plan me and Jörgen has made up to reduce the delay is a bold (and probably stupid) one; let's drive all the way to our first hotel in Vik so we will at least be on the planned route and not needing to rebook any hotels (we still are behind in stuff to see since we had planned for the whole Golden Circle on Monday).


And while driving in the middle of the night, let's check out the Kerið crater, it's almost on the way!
So we headed out and due to the midnight sun we could still see the landscape around us which seemed very nice. We would get to see more of that during the next few days... 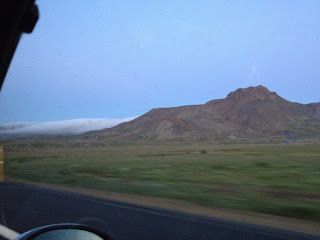 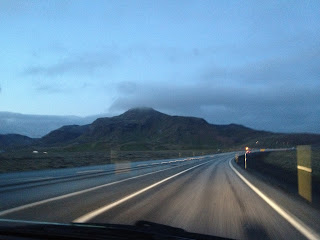 Kerið, an old, now water filled, volcanic crater was great to see. It almost looked like Blofeld's lair in 'You Only Live Twice'... =) 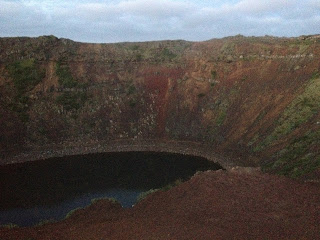 Moving on, towards Vik, we drove and drove (and when I say 'we' I mean of course Jörgen, who likes to drive and did an amazing job doing it tonight).
We drove passed the Eyjafjallajökull vulcano, which caused some problems to the airlines in 2010, we passed (and made a brief stop at) the waterfall Skogar: 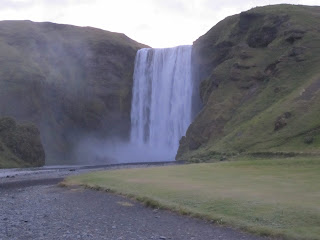 Finally, at around 3:20 in the morning we arrived at our hotel; Höfðabrekka.
We went straight to bed and fell asleep within minutes. Very tired!
Posted by Halo at 1:08 am