Since the jet lag was screwing me over anyway, I got up at 4:30 to go to the near by, world famous, fish market. Luckely for me I told the guy in the hotel reception where I was going and he told me it was closed today... So I went back up to try to sleep some more. Maybe I'll go there tomorrow.

Having tried for several hours, I finally fell asleep at nine and woke up about three hours later.
I got up and ate some noodle soup in a restaurant (which was pretty OK). Then I went to Yoyogi Park, a place where apperantly a lot of Japanese people dress up as they want - not what the dress code says, like 60's rockers, anime characters, cybergoths and so on.
I walk around the whole park without seeing anything special (nothing more than I expect on a normal street). Either I looked at the wrong place or they were scared off from the normal masses having their Sunday Park day. Eventually, on my way out, I found the 60's rockers and they were dancing like crazy to high volume 60's American rock. 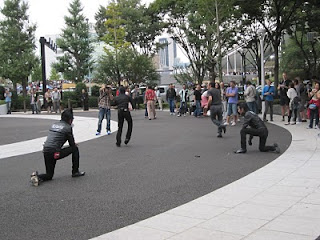 There were a few gangs dancing, but I liked these guys, they called themselfs "Lebels". Hehehe, irony ftw.

I went to the next park and to the Meiji Jingu, a Shinto shrine dedicated to Emperor Meiji, the one who stood behind opening Japan up for foreigners at the end of the 19th century.

The gate at the beginning of the park: 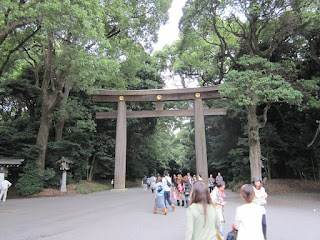 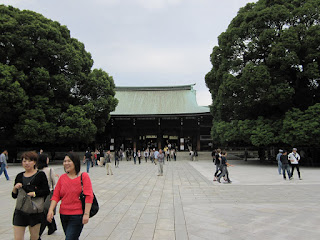 After visiting that old building I headed for a newer one; the World Trade Center to see Tokyo from above. The view from the 40th floor was stunning. 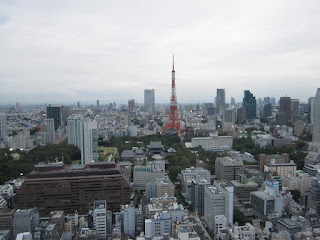 The Tokyo Tower, a replica (but not an exact copy) of the Eiffel Tower in Paris. For some reason the Japanese paint their radio towers red & white including this one.

Other views from the WTC: 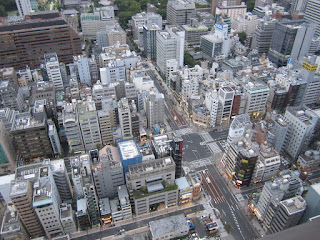 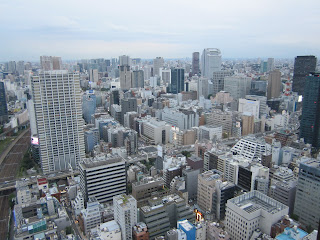 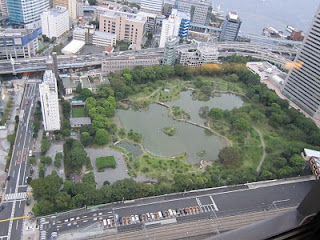 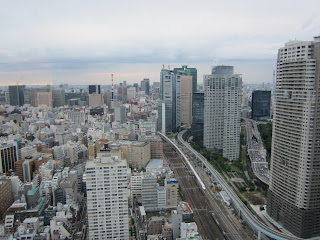 After this I was tired and hungry so I went back to Ginza for something to eat. I walked close to an hour before I found what I was looking for, a Sushi restaurant. I think it was a really fancy place, but staying on the cheap side of the menu, I got away with 2200 Yen (about 200 SEK) and that's including a Sapporo beer on draft.
So was it better than Swedish sushi? Well, yes, it did taste a little better, but seeing that this was suppose to be one of "Tokyo's finest sushi restaurants" it wasn't that big difference.
But I will try more sushi places on the way so we will see where the medium experience ends up.

It has started to rain so I went home after this. On my way to the hotel, I picked up some more stuff in a convenience store like Pepsi (don't trust those japanese sodas anymore), water, chocolate (tasted as it should) and something I thought was popcorn (but was more like corn...something - didn't taste good at all).


There is a lot of buttons on Japanese toilets. I tried the bidé function today (for the first time ever) and the experience was... uhh... interesting.
Yeah, that's all I am going to write about that.

Time to finish the book I am reading at the moment; "The Narrative of Arthur Gordon Pym" by Mr Poe himself.