For about 25 years or so (ever since I saw Shogun on TV when I was a kid) I have been fascinated by Japan and always wanted to go there.

Today, that dream came true. Read how this trip will unfold right here.

Friday September 24th
After a truly horrible week (where I felt my energy was all gone and I was close to that famous wall), the date for my Japan trip finally came. With minimum preperation I set out to Landvetter airport to catch my flight at around 5pm towards Narita Airport outside Tokyo (via Frankfurt).

It was the first time I went with a Japanese airline (JAL) and the were some differences (which of course makes sence since it's Japanese); like getting both chop sticks and fork/knife with dinner, the guy in the security cartoon looked asian instead of caucasian (duh!) and they served green tea.

Saturday September 25th
Arriving at Narita (after about 14 hours of travel) everything went very smooth and I was soon waiting for my train to Tokyo. There I saw for myself what I had only heard of before, the lines to board the train: 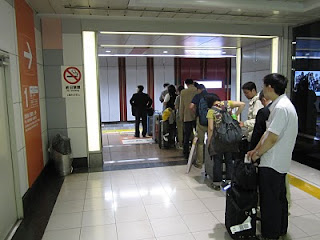 Yes, that is correct, no pushing or shoving when the train arrives at the station, it's slow and easy where first in line also gets to board first.
It's looks very strange, but of course it's a much better system than everywhere else in the world.

Anyway, after about 40 minutes I get to my station, change to the subway, walk a little bit - and I am at my first hotel here in Japan; the Ginza Capital Hotel.

My hotel room (815) might be one of the smallest I've been in - but I know already now that it won't be the smallest on this trip... 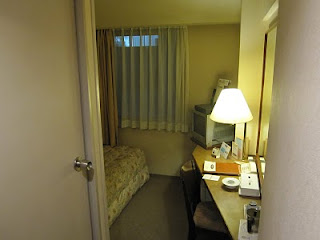 After a quick shower and new clothes, I set out again.
I went first for food and pretty much just went into the first place I saw. It turned out to be a Italian restaurant - Japanese style. The food was OK and might have been the first indication that this trip will cost a bit when it comes to food. We'll see if that's true later, I guess.
At this restaurant two Japanese women started to talk to me in a very broken English. They asked where I came from and I understood that one of them had been to Stockholm three times. Why she's been there, I never could figure out. They also pointed at me and told me I was big. And then she made a sign with her hands showing sideways - not length-vise. Thanks for that! :-/ But I smiled to her and lied; yes, I am big and it's very good. Japanese women!

Anyways...
After dinner I headed up and down the streets to have a look at Ginza by night, which was nice. 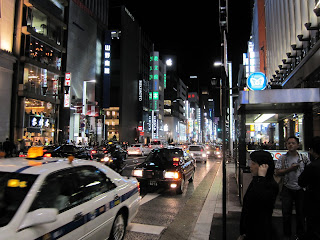 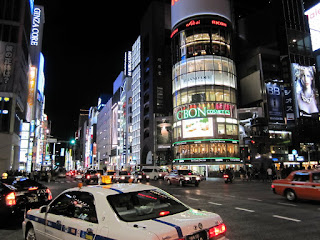 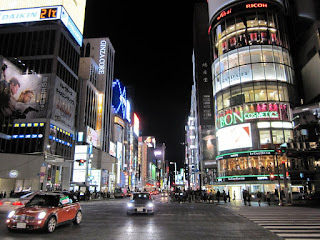 Some reflections this first day;
They drive on the left side here, but don't have those great arrows in the streets where to look for traffic like they do in London. This can be a trip more dangerous than I expected...
I was of the belief that most signs were in both Kanji and English. This is not the case. Some are, but far from all that I wanted translated. And I am sure the percentage won't pick up outside Tokyo...

I'll be in Tokyo for one more day before I head for Osaka. Not sure what I will do tomorrow, but I will ponder over it before I go to sleep.
Posted by Halo at 2:18 pm