Today's main event was to go to Himeji and look at the castle there, supposedly most beautiful one in Japan. But already at Kyoto station I got the sense that the trip would be a disappointment when the clerk asked me if I really wanted to go there, apparently it was under renovation...

But of course I went anyway and as the train pulled in at Himeji station my fears seems to be coming true. I couldn't see the castle at all - it was all under renovation cloth & building structures 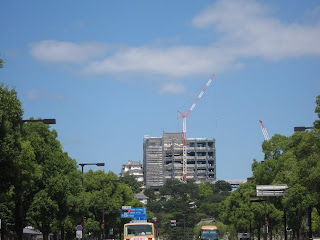 and when I got there they told me the whole main building (inside & out) was closed so I could only walk around in the gardens, some baileys and a castle wall corridor (where you had to take off your shoes).

They day was also very sunny and very, very hot, just like most days has been on this field trip around Japan. Not ideal when you walk around as much as I have. But of course better than the alternative. 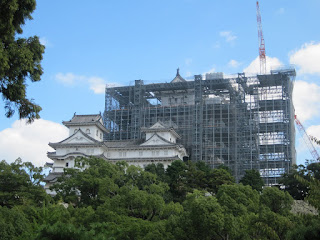 But despite all the setbacks , it was worth the trip. 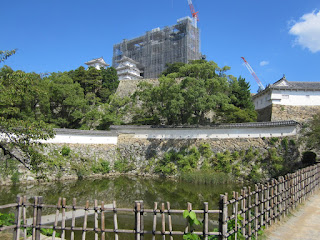 The buildings that was visible was lovely and I got a feeling how it all looked underneath. 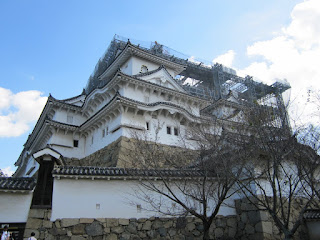 But was I disapointed? Yes, I was.
Not only was this one of the top sites I wanted to see in Japan, but it was also featured in the Bond movie "You only live twice" (it was Tanaka's ninja training camp)!

So this means I needed some cheering up. So directly from the Himeji Shinkansen I took the local train to a suburb of Kyoto where Gekkeikan makes their famous sake - and they also have a sake museum.
I wandered around in the narrow streets to get to the museum (and almost got lost), but after a while I found the place: 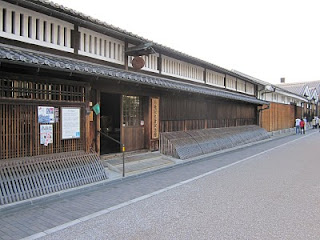 Unfortunate there was no tour of the distillery (might not be located in these parts anymore?), but I did look at the museum - and bought some sake.

One notable thing I enjoyed a lot was that during this whole trip (local train, suburb, museum and local train again) I didn't see one Westerner, only Asians.
I liked that, that should indicate that I did something outside the normal tourist tracks and that's good. :)

However, while I was in the southern Kyoto, I also went to a Shrine nearby (full of tourists of course); the Fushimi-Inari-Taisha Shrine. 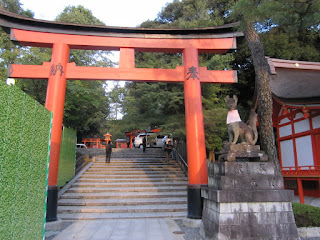 And as a side note, I have almost got used to see these reversed swastikas all over the maps (they point out shrines). But just almost.

Anyhow, this is a place where they really like Torii gates.
They have put them after one another so the form passages.
Like this: 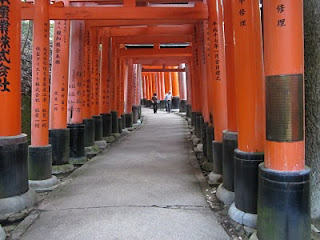 It wasn't too bad, but I didn't stay long. I was too tired after this long day.

So I went back to my hotel. My new hotel that is, hotel #2 in Kyoto, the Ryokan Nishikirou. 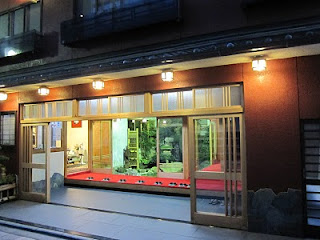 As I mentioned earlier, a Ryokan is a traditional Japanese Inn and this one has a small pond inside: 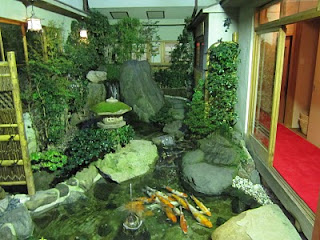 You have to leave your shoes at the reception and wear slippers - or just socks if the slippers are too small, which they always are. 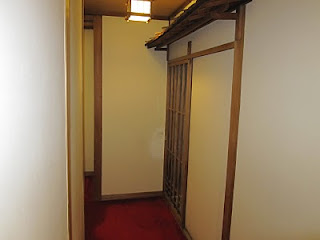 As for the room, very old fashioned: 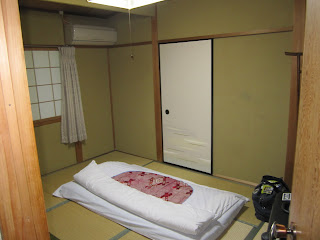 Yes, I am suppose to sleep on that mattress (futon). And there are no chairs, but it does have a small table - where you have to kneel to sit next to it.

And to expand our knowledge of Japanese toilets (the shower/toilets are in the corridor btw); this toilet has a digital watch (not sure if it has an alarm function though. ;)
And it has a remote control! I don't know the functions on it yet, but I will probably try it out tomorrow just to see what it does.

My first intentions for tomorrow was to visit a Japanese hot spring, but when I looked it up on the internet, it said they did not allow anyone with tattoos to their spa, wtf?
This seems to be a general belief here - tattoos are bad (might have to do with the Yakuza).
So I will have to change my plans, but I have a few ideas...
Posted by Halo at 1:58 pm