Time to move on to Kyoto!

Remember those "female cars" in the subway/trains? When going with the subway this morning I suddenly realized I was on one. I was in a hurry when I jumped on it so I didn't notice it. Embarrassing to say the least. So I jumped off at the next stop and changed car. *blushes*

Anyway, at the train station I took the Hikari to Kyoto 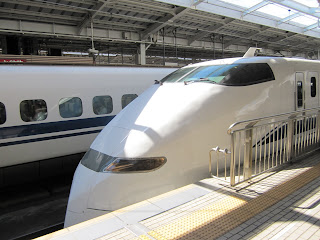 and carrying all this luggage onboard made me realize I have made a mistake when planing this trip (I will put that on the "didn't have time to prepare-list"); it would be better to stay in once place (like Osaka) and go on day-trips to the nearby cities (Kyoto is only 13 mins with train) instead of have to bring all your luggage with you all the time. I will try to make Kyoto my base of operation instead of changing city all the time. More on that when I know myself.

Anyway, Kyoto; the old capital of Japan. Where to go first?
Well, the hotel is always a good start; Hotel Oaks Kyotoshijo (room 718): 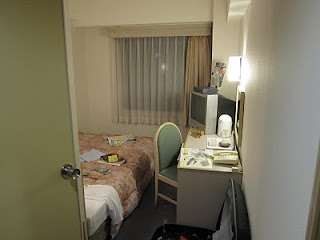 But where to now?
I decided to start with Nijo castle, an old palace that used to be the residence for the Tokugawa shoguns when they were in town. 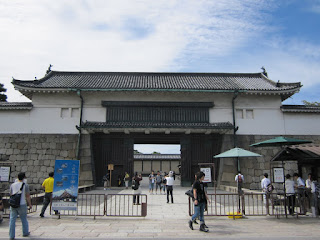 and the entrance to the building where the Tokugawas stayed and used as an office: 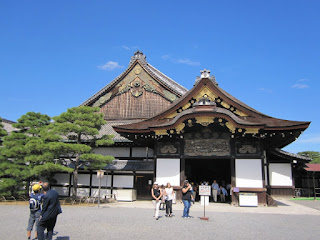 To be able to go inside and do the tour you had to remove your shoes. I liked that. :)
An interesting detail was that all the floor was of "Nightingale design" - it squeaked as you walk on it. This was to prevent anyone sneaking in during the night.

The castle garden was really nice as well: 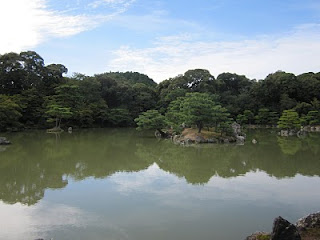 After this I went to Kinkakuji, where they have a golden temple which is suppose to be very beautiful - and it was: 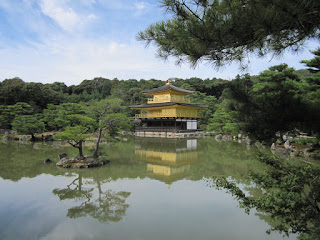 The building is painted with a gold/yellow paint and looks really different. The whole park in which it reside is also a remarkable sight. It seems like they have put in a lot of effort to make this place as peaceful and beautiful as possible. 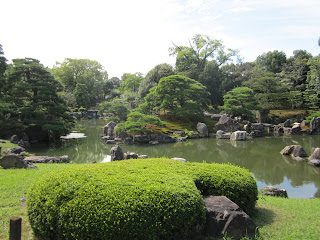 A side note here is that the battery in my camera died, but I have one more. lets just hope it will be enough for the rest of the trip. I haven't come halfway yet!

I had time for one more thing to see today so I went to the Imperial Palace/Garden. It was a nice big park where people was jogging, walking the dog and doing normal park stuff, but unless you took a special tour you couldn't really see anything other than grass, trees and pebbles.
However I did went to the information disk and asked if this is where the emperor lived (this town & palace felt like it should be his permanent residence), but no - he lived in Tokyo - and funny enough, when he was in Kyoto, he didn't live in the Imperial palace, he stayed in another palace in the park.

Picture-vise this mean that he doesn't stay here: 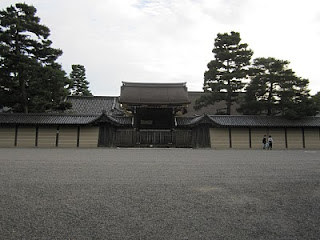 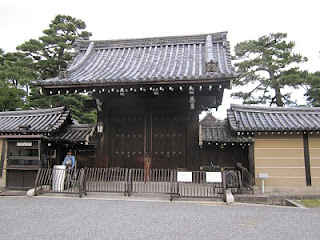 Aaaanyway...
I walk home from the park and stopped for some food at the Beer restaurant Lion. I had some stewed ox tongue (which was good) and drank some beer; to all, I can recommend the Yebisu Half&Half - that's half their lager and half their "Yebisu Black".
A funny detail at this restaurant was that each table had a button you could press when you were ready to order - or you wanted their attention. Not a bad thing to have! :)

A note I made today was how the buses work here (it's probably the same all over Japan, but this is the first time I ever gone by bus since I got here);
You enter the bus at the rear door end and exit from the front. And you pay the fare when exiting. Never think I have ever seen this system before...

OK, I am off to fix with my hotel reservations for the rest of my Japan train trip.
See you tomorrow!
Posted by Halo at 1:10 pm