I have rearranged my trip a little bit so my intention is now to stay in Kyoto for four days and do day trips from here. I have this hotel one more night, then I will find a new one, hopefully a Ryokan hotel which is suppose to be a traditional Japanese Inn.

So this mean that it's Hiroshima day today - I got up real early and took the 7:20 Shinkansen. I arrived about two hours later (slept most of the way) and went to the Peace Memorial Park.
Now, the thing is, that the only real reason I went here was that this city was the first ever A-Bomb target. I am not really that much into it, but figured that if you are nearby, you should probably check it out. So that's why I am here.

Maybe the most famous building here is the A Bomb Dome, one of the few buildings left standing when the bomb went off here 65 years ago. 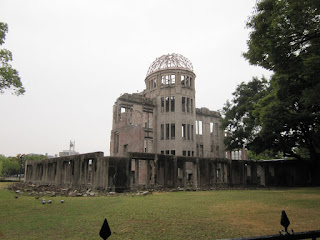 And while I am moving into the park, I am trying to avoid the hordes of tourist group that are here - and in every other city it seems - because I really don't want people to think I have no willpower of my own and therefore go on those trips. I am sorry, but it's just embarrassing seeing them walk around.

There are many, many monuments and statues in the park for those who died by the bomb and for nuclear disarmament and peace.
One of them is the cenotaph (here seen surrounding the A Bomb Dome in the distance). The ark in the middle contains the names of all those who died by the blast and of the after effects. 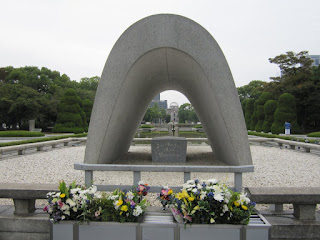 So how was all this affecting me?
Well to be honest, I did feel it a bit, but not that abundantly much.
However I also decided to take a quick look in the Memorial Peace Museum - and in there you got the chock of it all. There were pictures, videos, documents and pieces from the devastation. Some of it went straight to the heart. It was real tough just to walk around there.

The museum was mainly focusing on the importance of peace and nuclear disarmament, not that much in putting the blame on anyone. But still, one can not stop wondering what all the Americans where thinking when walked around in there.

After Hiroshima, I took the train down to Miyajima, an island most famous for its big, red, Torii port in the water outside. And it was really wonderful to watch. 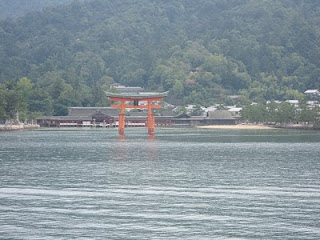 I also walked around a bit on the island (deers roam free here as well, just as in Nara) and visited the shrine of the island and the Daisho-in temple. 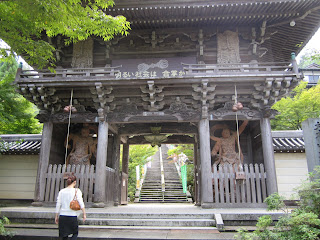 There were a lot of small interesting things about this temple, one was all the little statues on this path up to the temple itself. 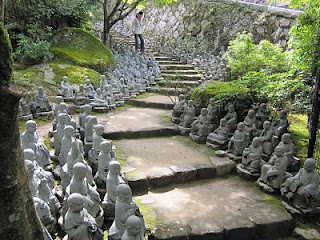 But, at risk of sounding spoiled, having seen this many temples in just a few days, I left pretty soon and didn't go in everywhere to look.

After that it's ferry to the mainland, train to Hiroshima and Shinkansen to Himeji - I thought.
But I noticed that I would arrive too late to see the castle there so I quickly jumped on the other train in the station, which was headed for Kyoto (via Shin-Osaka). I will probably go to Himeji tomorrow instead.

Back at Kyoto I went to the travel agency to try to get a Ryokan hotel for the two extra nights in Kyoto. Unfortunate almost all were full and I got a cheaper-than-I-wanted in the end. Seems like the toilet & bathroom is in the hallway. Guess we'll see tomorrow. Just hope they have internet. :)

I went out for a stroll in the evening and went to the cinema, but no good movies (with English voices & Japanese subtitles) were shown. Maybe I'll try again back in Tokyo.
I also ate some sushi at a restaurant. It was expensive - and not really good. :(

A reflection I have made here in Japan is that the Japanese must love pastries. There are bakeries everywhere! If one likes those kinds of things you could probably walk around for ages and tasting something new in every corner. Lucky for me, I'm not into these things at all...