So after a while I got hungry and went out looking for something open at 9:30 pm.

I found this great place, no clue of the name, not far from my hotel. The waiter could speak a little English but was unable to translate the menu (they did not have an English nor a picture menu) so I told him to just bring me something with meat. "Meat! What ever you recommend" I told him. And a drought beer. The beer happened to be a Kirin and then they came in with a small grill and some unspecified meat pieces for me to put on the grill. And some cabbage. Plus rice.

I was sitting right next to like 20 bottles of sake, so I ordered some of that as well.
Cold or warm? - The way you drink it! (cold)
Small or large? And I actually took a small, since I was a) alone and b) going to Kyoto in the morning.
This is the small I got: 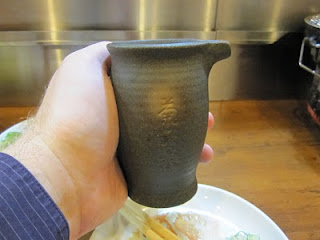 But of course I drank it up, Kanpai!

The food was very good and so was the sake.

Just wanted to tell you that.

Maybe I should have taken a large?