Another day - another flight.

Today we actually had some time in the morning to take it easy. Our taxi to the airport didn't pick us up until 10.

No problem at the airport and we departed on time. 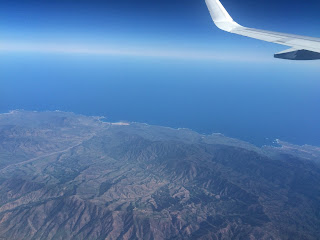 After about two hour flight we landed in a place called Iquique (still in Chile). There we had to leave the plane, go through customs, wait a little bit - and then go on the air plane again.
Then we could fly again - towards Bolivia. Why they couldn't just have a customs booth at the Santiago airport is beyond me.

Anyhow, after flying over the Andes again - and this time even land in the majestic mountain range, we arrived at the world's highest located airport El Alto (4062 m above sea level).

From there we took a taxi down to La Paz (around 3600 m). First impression of the city: a lot of pollution in the air (exhaust fumes and whatnot) - and there are even more loose dogs here, than in Chile.

You can defiantly feel the high altitude here, but as for now it is survivable.

We checked in to our hotel; the Suites Camino Real, where we had asked for a non-smoking room - so we got a smoking room, but the key came with a "non-smoking card" to prevent us from smoking. The room still had ash trays.
Very strange. So naturally we made them change our room to a real non-smoking room, which we got; room 404. 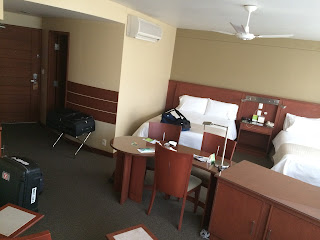 After this, we went out to ride the cable car system (recommended by friends as a good way to see the city).

La Paz is the first city in the world to use a cable car system as public transportation; they have three lines in operations now (with more to come).

So we went to the the green line which was located very close to our hotel, took that, continued on to the yellow line. Both lines takes 17 minutes end-to-end. 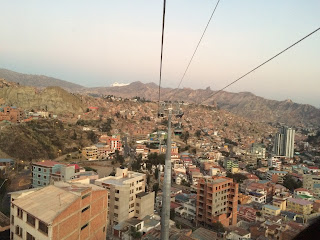 The plan was to see the city, but five minutes after we got on it, the sun set so we mostly saw the city by night - which was nice too. 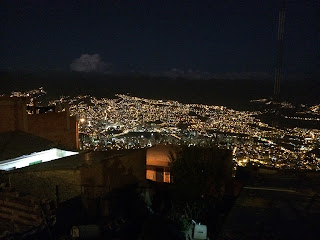 Then back to the hotel and ate at the restaurant there. I had Llama; it was good, far from the best meat I had, but not the worst.

Then time to sleep, we are going up crazy early tomorrow.
Posted by Halo at 12:18 am

Yes, one of the few slow mornings during the trip when we actually could sit down and enjoy the breakfast. The dining area in the hotel was like the entertaining room in a private mansion. Lots of big sofas, coffee tables, book shelves and those large mirrors placed on the floor.

The flights went well, no mishap with the seating or such. Very strange stop close to the border to Bolivia.

This day we entered the second country on our trip, going from Chile to Bolivia. It became very clear from the start that Bolivia is not as well developed as Chile when it comes to infrastructure and such. Seems to be poorer overall. The taxi from the airport to our hotel below in La Paz took us through El Alto. It is a newly created city on the border to La Paz. They have built a city to replace the "favelas" around the original city. It was still very rough. Almost no real roads, mostly dust roads with huge stones stuck in the roads that made the trip bumpy as hell.

We checked in at our hotel that seemed to be very nice. It's sitting in one of the lower parts of La Paz which was probably good. We didn't have time for acclimation to the high altitude and we could really feel the lack of oxygen... La Paz being built in a canyon that is sweeping downward. There is a 500+ meters difference between the lower and higher parts of town.

The cable car trip at night was nice. The dinner was not very good. I had a steak, Argentinian, recommended by the waiter which usually is a good strategy but not this time...

Late night out in the city? Hahaha. Nope, early night, we were going to be picked up at 5.15 AM the next morning.