After 12 hours flight the morning broke on the air plane and we flew over the beautiful mountain range of the Andes. 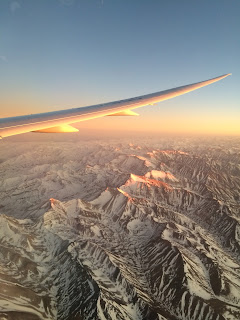 Getting closer to Santiago, the view was just one big cloud with some mountain peaks breaking the whiteness. 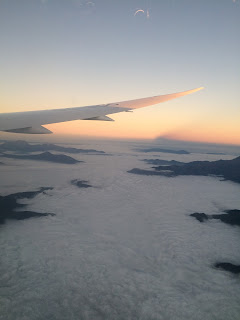 And this is where we started our decent - and went straight through the cloud (among said peaks). You could not see anything outside the windows - and then all of a sudden we landed (still in the cloud). Much respect to the pilots who land here!

Stepping out from the plane meant that I was on the southern hemisphere for the first time. Nice! :)

Interesting observation while we waited for our luggage; dogs (presumably drug sniffing dogs) were walking freely inside the area, across the luggage - and the luggage tracks.

Then we were picked up by our ride who drove us to our hotel; Le Rêve Boutique Hotel.
We had some problems with the shower in our first room (303) - it did not work - so we got a new room (302). 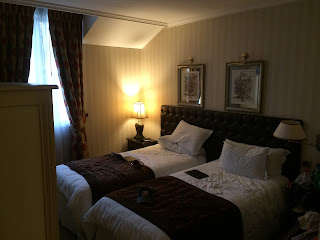 We travelled with the Metro to the Baquedano station and ate a pizza at Patio Bellavista square. Then we took the Funicular up to Virgin Mary statue at Parque Metropolitano. 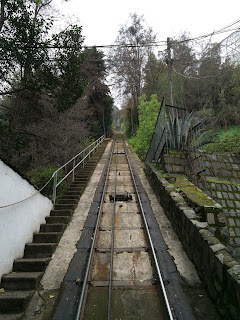 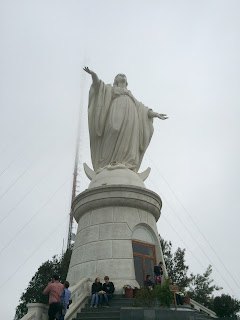 View from top side of funicular over Santiago: 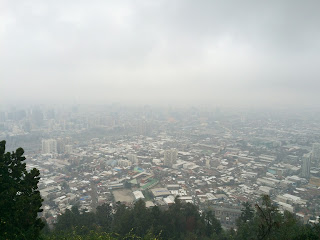 Then we went back to the hotel to chill a bit.


In the evening we went out to eat dinner at a nearby restaurant (called Lomit's) where I had a very nice Filet Mignon with bacon. Henrik had the salmon.
We also tried the local alcohol Pisco, which is made of fermented grapes. We were thinking shots. They did not.
The waiter put two real drinking glass on our table and started to fill them up. We had to stop him from poring after a while. 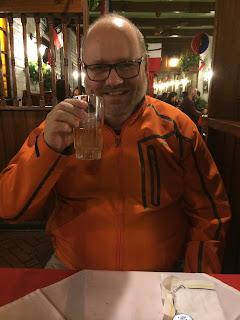 Henrik did not finish it.
Neither did I.

Then back to the hotel. Early wake up tomorrow.

The flight went ok. Not much of quality sleep, but that's the name of the game on a trip like this.

One interesting thing was that alla the flight attendants strapped themselves in when the pilot announced that we were going to pass the peaks in the Andes. That is, in the same way as they do when the plane is taking off or landing. I guess the passing of the high peaks can result in heavy turbulence but we didn't get any on this passing. First time I have seen this behaviour though.

The hotel, La Reve, was a very nice small "boutique hotel". Nice atmosphere and design. All the large mirrors were placed on the floor. Due to the risk of eart queakes I speculated. But no, the wife of the owner had designed it that way (I asked the guy at the front desk).

At the dinner I had the salmon that wasn't any good at all. However we saw some guys ordering the schnitrzel and that looked spectacular. We decided that we should come back the other night (after our short detour to the Easter Island) if time allowed and test it (we never made it back in the end).

Oh my gosh, that full glass of pisco was insane. The guy never stopped... HE NEVER STOPPED!
:)