Up at 5:15 for a quick breakfast and then heading to the airport.

A looong flight (probably six hours, but felt like 60) took us to Easter island. The very small, isolated island in the Pacific Ocean famous for its statues, the moais.

We landed on the large air port strip on the island (built by USA during the 60's to function as an emergency landing strip for the space shuttle [never used for that purpose - yet] - NASA still has personnel here).

After a chaotic luggage retrieval, we got picked up and driven to our hotel. 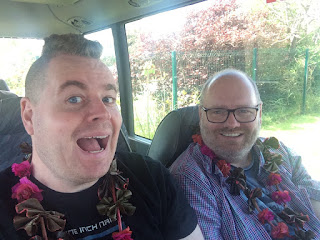 Our hotel here is Taha Tai Hotel. We are staying in their Bungalow #6. 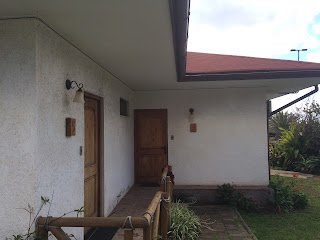 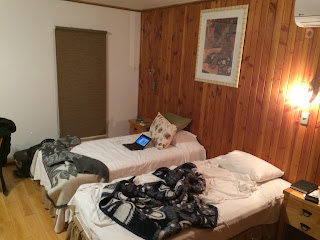 Me and Henrik had discussed a lot how to go about going around the island; our options are renting a car, going on a tour bus - or getting a private tour guide.
The tour bus was out of the question early, since we are only staying here for two half days. (to see all we wanted we would need a full day tour).
Renting a car (for about 100-120 USD) had the disadvantages that there is no car insurance on this island; ie you break the car, you pay for it - and you loose the guide experience.
So we settled for a private tour guide (for 350 USD). Fortunately, we could get a tour guide to our hotel very soon after we settled in. His name was Tongariki and was a very nice guy; he understood that we did not have much time and was very knowledgeable regarding the island and it's history. He probably thought we were crazy only staying here for 26 hours though.


We drove along the southern coast line and got to Rano Raraku; the dormant volcano where all the moais were created. There were about 600 moais scattered around the grounds (out of the 900 on the whole island). 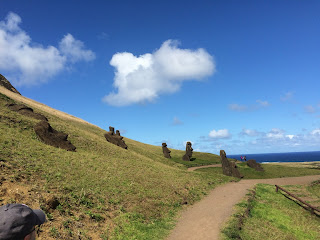 This was really a sight to see! 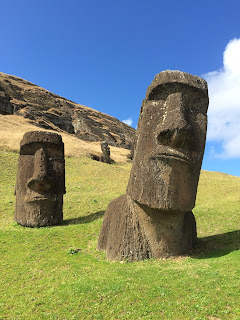 After walking outside the volcano, we also went inside the crater. 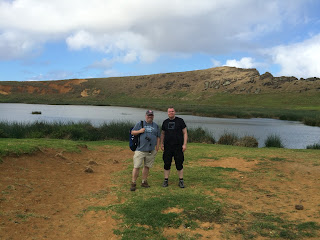 Then off to the largest Ahu (platform where the moais were standing); Tongariki (where our guide got his name from).

This ahu has been restored to it's original shape. Most moais on the island has fallen down and not raised again, but here they are shown in its intended glory. 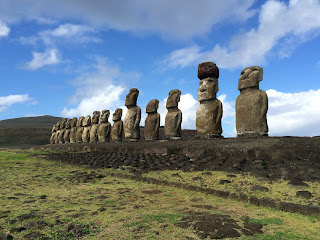 15 magnificent statues, however most are missing their red "hats" (it's really their hair). The rest of the hats were laying not far from here, but they were not put on the statues since they had corroded and were damaged.

Then off to the beach!
Almost.

We first made a stop by some sites to watch some ancient hieroglyphs, very interesting. Kinda. 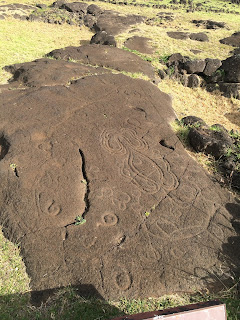 The beach (called Anakena) was very nice and this was also the place where the Polyneesian people first came to the island. 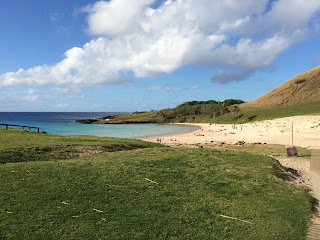 These moais were raised in that honour (it is of the royal family that came here). 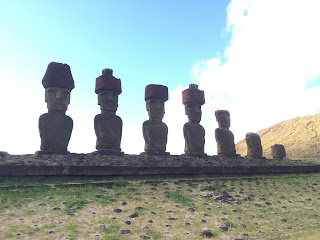 Me and Henrik also took a swim here. The water was cold going in, but once there it was really nice. I wouldn't mind staying there longer, but it was soon time to push on!

Then we were heading towards the south tip of the island, but we got word that it closed at six, so we were too late to see that part. Our plan is to see it tomorrow if time permits.

After a stop at the hotel (shower, change and drinks), we took a taxi to a restaurant we had read about; Tataku Vave, where we got their speciality, lobster for starter (it was much smaller than we were used to back home) and then the Easter island speciality raw Tuna for main course. 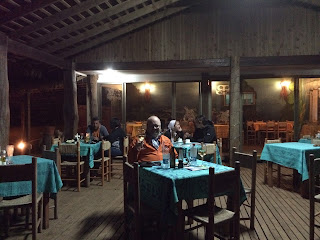 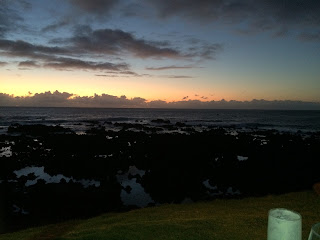 We got the food in a sea shell - and it was a lot of food. Unfortunately neither the lobster nor the tuna was to our liking so we left a  lot on the plate where we were done, much to our waitress' disappointment.
It could be worse though, Henrik could have told them to give the leftovers to some random cat.
Oh, wait... 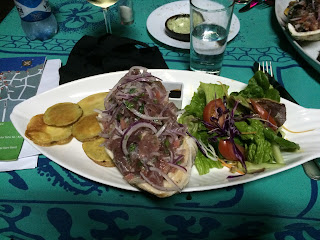 When we got back to the hotel, we took a moment to watch the beautiful, but very unfamiliar, night sky. An amazing sight without all the light pollution we have at home.
Posted by Halo at 6:31 pm

The Easter Island was clearly one of the top 2 highlights on the trip!

We were very lucky with our guide, Tongariki. He had just recently come back from some 15 years in Los Angeles. He left the island all those years ago for college and after that he had been working as a SW designer at Blizzard (I think it was) designing computer games. He was beautiful, funny and relaxed. Back home on the island again he worked as a tourist guide as well as traditional dancer. He was a member of one of the dance groups on the island.

There are only 6000 people living on the island and Tongariki told us that everybody knew everyone on the island, almost, and if the old guys didn't recognized you they gave you "the third degree" questioning...

We talked about challenges that comes with dating on an island with such low population. Thus we came up with some ideas of suitable smartphones applications, such as an app for establish how close relation you have with the girl/guy... Being such a small population this was actually something of an issue according to Tonga.

We had some five hours of guided tour with our guide and we got to see almost all of the sites we wished to see. The island is much smaller than Gotland even. It took us 30 minutes to go from the other end back to the main "city" (really a small village).

The bungalow was nice, no problems with the shower or with nature and it's creatures.

We had checked the local offerings for dinner and we picked the one that gotten the best reviews. It was a sea food restaurant. Obviously. Unfortunalety we picked wrong, I must confess. The lobster was over grilled and the raw fish entre was peculiar. I choose a mix of raw tuna and grilled octopussy + shrimps. The raw tuna tasted good the first bites, but soon I got fed up with the huge amount of "rawness". It also smelled like "fish"... I ate all the octopussy and shrimps but left most of the tuna. Maybe something for the local cats? Ouch... (In my defence, I was tired out of my mind, and my manners)