We landed in Rio at 4:45 local time. We didn't sleep too much on the flight, but it feels ok anyway, which is good. We have some places to be today!

We got a pick up to our hotel; the Miramar Hotel by Windsor. At arrival we they gave us a glass of champagne and a few minutes later our room. We wasn't sure if we would get our room so early, but luckily we did. 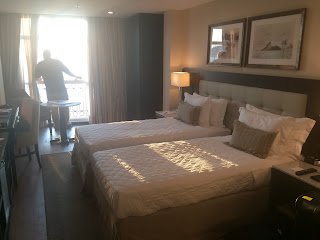 Our room had this great view of Copacabana: 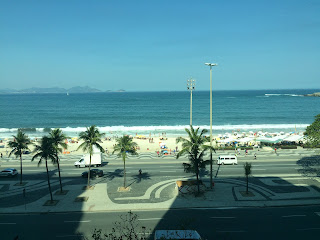 Then we took a shower and got ready for today's adventure.

First a taxi to the cable car beneath the Sugar loaf. After waiting a few minutes, we took the forst car for the day to the first plateau. 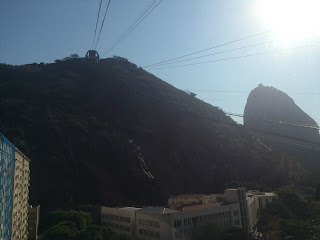 We are not there only for the fine view, we have also Bond business to attend.

At the first plateau, we could recognize scenes from the movie Moonraker: 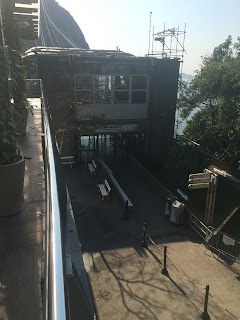 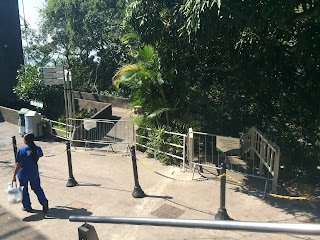 Then we headed up to the second and last plateau, the sugar loaf itself. 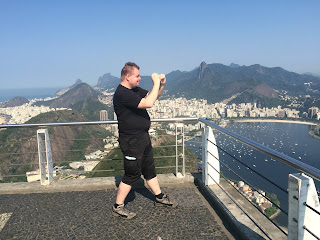 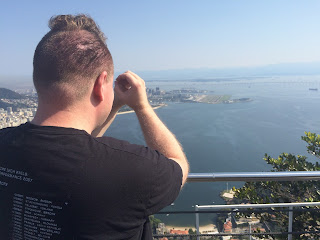 And of course a lovely view of Rio. 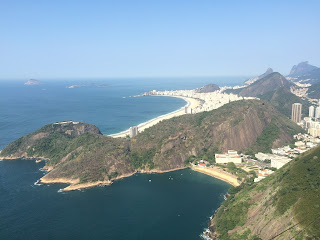 We spend some time there (and ate breakfast), but eventually we headed down again.

New taxi; this time to the train/funicular that would take us to Cristo Redentor (you can also take a minibus up there, which would be simpler and take much less time, but I wanted to do the train).
We arrived at the station at 10:20 - and got train tickets to 11:40.
During the wait, the heat came to Rio. It is really getting hot here now. 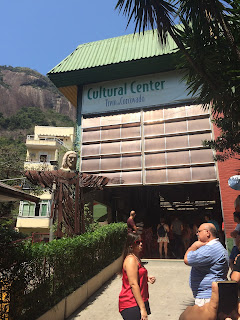 A 20 minutes train trip later, we arrived at the top of Corcovado.
And there is Cristo - and a whole bunch of tourists. 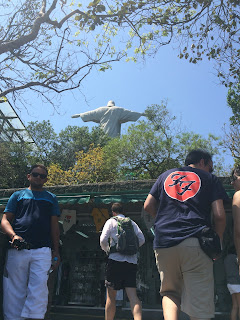 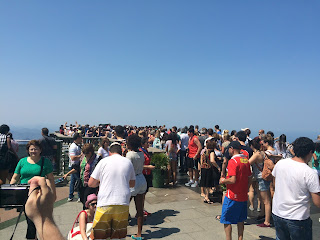 We did our thing, taking photos of the guy himself, the lovely view

and a few selfies, 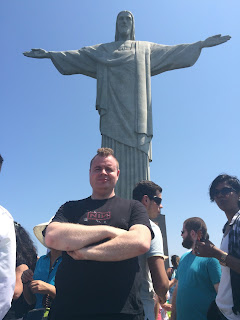 before we escaped the sun and went back to the hotel to take it easy for a while.

When the temperature outside started to go down, we went to the beach. Our hotel was just by Tower 5.

Copacabana is a nice beach, but with big waves coming in which made it hard to do any real bathing. So we just jumped in for a bit, sat on our beach chairs - and repeated the process.
It was very nice to relax for a bit.

Back at the room, we had earlier discovered a fun leaflet from the hotel: 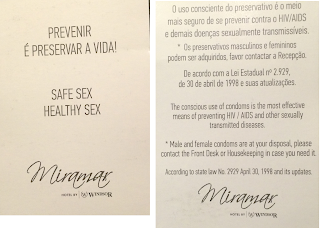 Henrik now tried to ask the cleaning lady in French (the closest language to Brazilian Portuguese any of us spoke) to get another one so we could both take it home to show friends.
He talked to her for several minutes, trying to make her understand.
It didn't work.

Five minutes later the cleaning lady came back with an envelope - with condoms.


Time for our last meal in South America. We stopped by our hotel pool to have a Caiprinha (of course - when in Brazil!) and then went to a nice Italian restaurant (Don Camillo) recommended to us by the reception at the hotel.
The food was very good.
Then back to the hotel. We can actually sleep in tomorrow. Yay! :)
Posted by Halo at 10:12 am

This was the most dreaded flight for me before the trip. Including two flights and arriving in Rio in the middle of the night I expected to be exhausted when we arrived. I had pre-ordered a pick up at the airport to a high cost but it was worth every penny. The driver was a big burly guy and his car was a huge sedan with dark windows. The interior of the car was too big, too much space. They had put an ice cold water bottle at each seat which was very welcomed after the flight with all the dry air. Arriving to the Miramar and getting champagne was nice but the real kicker was when the guy at the check in gave us a room right away. I had expected to get the room in the afternoon but he said: “When we have a room available, why make you wait for it?”. I loved him, I loved the hotel.

After a shower that took me back to the living we went out for sightseeing. I really liked both locations. First was the Sugar Loaf Mountain with the Bond location. Finally I have taken part in Patrik’s Bond location thingy. I loved it. Second was that guy on the hill. Huge statue. Lots of people.

Back home for another shower and a short lay down. Finally we got to the beach. The hotel gave us towels and chairs. The waves were great, massive rolling thunder that dragged you down to the sandy bottom. Wonderful.

The thing with the maid and the condoms was hilarious. How could I even think that she would understand that it was the NOTE I was interested in. She thought that I desperately asked for condoms, even though the note stated that all guests could pick them up down in the lobby. Jaja, a little bit of embarrassment on me, but I share it gladly. Patrik seemed to find the incident funny enough at least.

At night we strolled along the Copacabana beach (as you should? Or shouldn’t?) until we found the Italian restaurant. The food was very nice, the guy serving us not so much.