The night has been rough on both of us with very little sleep.
The thin air has finally got to us.

Today we had booked a day-tour to Lake Titicaca; the worlds highest navigable lake (3800 m).

The trip from the hotel to the lake took about 1,5-2 hours. Then we got on a small boat that took us from the smaller part of the lake to the land that divides the lake.

During the trip, the guide told me I looked like the singer from Alphaville (Marian Gold). With that eyesight, I am glad he isn't the one driving today.

Another bus ride got us to the town of Copacabana where we had 1,5 hours to explore by our self. 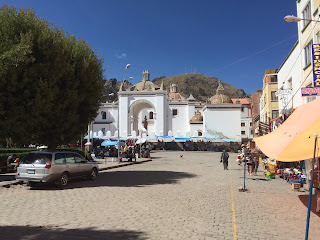 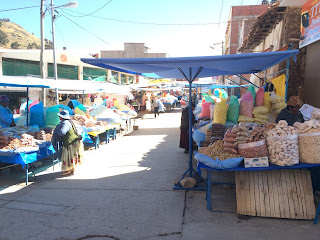 There were some other tourists joining this tour, but only one who stayed for the whole day (like us); a woman called Renata from Equador. She was very nice and also helped us with the language when needed. 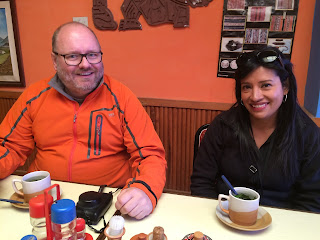 In Copacabana we went to a café where we were introduced to the local altitude-sickness-remedy; Coca tea (coca leafs in hot water, preferably with sugar).

Then we went on a catamaran that would be our vessel for most of the day. 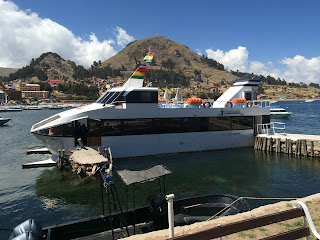 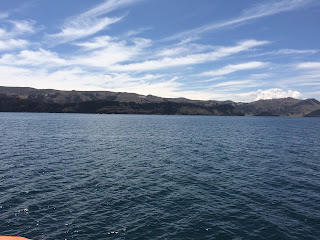 The ship took us to Isla del Sol (Sun island) where we disembarked. The tour then went up some steps; 206 of them to some kind of sacred fountain. 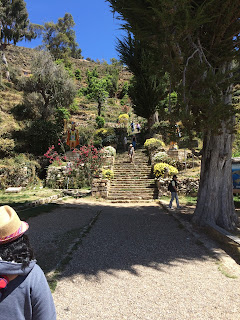 This took all breath I had left for today. And after these steps there were 70 more. Henrik is almost dying now.

Here we went through some carefully prepared tourist culture sites, like a big herb garden. 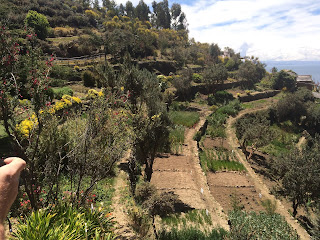 There were also a some dried vegetables on display, shipbuilding, a priest who blessed us (by sacrificing candy and other stuff) and a museum. 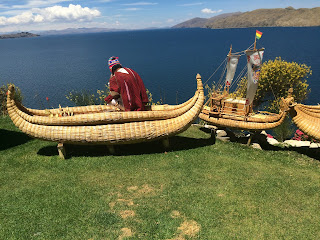 They also had a little pen with llamas and alpacas. 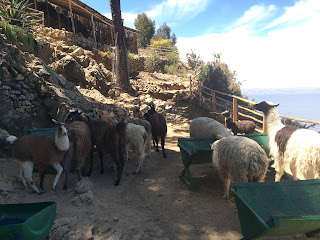 At least the view was lovely from up here. 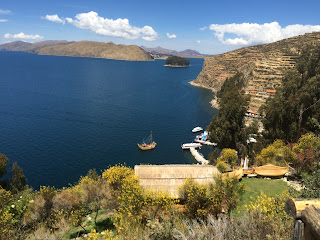 Back to the harbour and onto an "old" reed ship (it did have an engine and modern seats). 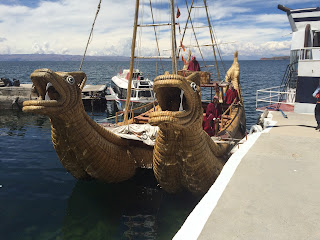 We even got to dress up in ponchos and Bolivian hats and they got us to row (this motor boat). 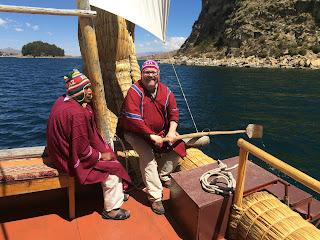 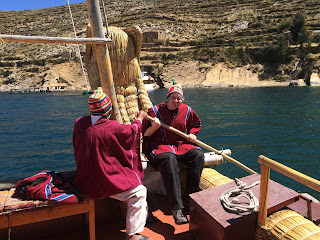 After we got to the bird palace on the Sun island, we changed boats and onto the catamaran again.
Then we had 3-4 hours boat ride back to the shore. 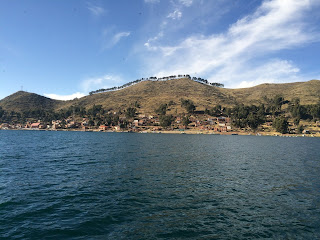 Me and Henrik tried oxygen from a tank on the boat (partly because of curiosity, partly for needing it). Non of us really felt any effect.
But at least now I have tried it.

Back to shore - and the bus, we went back to La Paz. After about 3 hour we were back at our hotel.
Dinner (I had Alpaca this time which tasted about the same as the llama - maybe the llama was a little better, but it could all be because of how it was prepared).

Then sleep. New country tomorrow!
Posted by Halo at 9:08 pm

Ahhh... The day at Lake Titicaca. After a night when I realized that the biggest problem with the altitude was not that one feels tired walking in stairs. It was lack of sleep. As soon as I fell asleep I woke up with a start. I think it was because the body relaxes when one fall into sleep, and then the heavy breathing became shallow breathing and the result - lack of oxygene. So the first couple of nights in this environment were more like the classic sleep deprivation torture.

The bus ride was bumpy. Very bumpy. Falling asleep, to wake up again. Repeated over and over.

Renata was a very nice girl. We chatted all three about this and that. Asked her about her country. Told her about ours. She worked with imports and exports. Sweet. I don't think I have ever meet someone working with that before. She wanted to go to southern Europe next year to see Greece, Italy, France and Spain. But in the end of the day the topics subsides and only a random picture or two of nieces and nephews were remaining to be addressed.

The guide. What was his name? Wasn't it the befitting name of Guido? He seemed to be very angry with the Spanish conquerors. I had high attention to his stories in the beginning of the day, but as the day went on I got sleepy and couldn't muster angry faces and closed fists enough. I think he was disappointed of me that I didn't react with rage enough all the time. And it was really all the time. Many many, angry angry stories. Hey Guido, lighten up a bit, man, I was thinking.

Then we were trapped in a tourist trap. We saw a shaman that blessed us and all our families. Nothing bad will apparently happen to us now. That is good. Wasn't too expensive either, considering.

Bumpy ride back home. Finally I got some useful sleep. We came back long after dark. It was really a full day at the lake, starting at 5.15. Having no energy left we went for the restaurant in the hotel again. We ordered a drink, very sour. Too sour. Unexpectantly we also ordered a pitcher of lemonade. Wine was out of the question, in the land of confusion. The lemonade was neither tasty. Argh. It looked so refreshing!