At the airport, we got a surprise; the airline had decided to move our flight from 10:10 to 11:00. Not so good when you have a train to catch at around 13:00 - in a city two hours away from the arriving airport (note that Bolivian time is one hour ahead of Peru time).

We were stressed all the flight and of course the immigration papers ran out on the plane so we had to fill those in on site. Time wasted!

We ran out of the Cusco airport, grabbed a taxi (our negotiation skills weren't the best at this point: "we have to be at this city ASAP. How much?").
But at least we negotiated down the price from $100 to $85 (normal price for this is around $65).

Our taxi guy couldn't speak English, but he could drive fast! :)
He managed not to hit anything on the way (but he did do the cross sign over his chest at one point) - and incredible enough, get us to Ollantaytambo just in time (took him about 1 hours and 40 minutes)!

Because of this we made a deal to pick us up tomorrow when we are returning.

The train ride took us through the Peruvian mountains and it was beautiful. 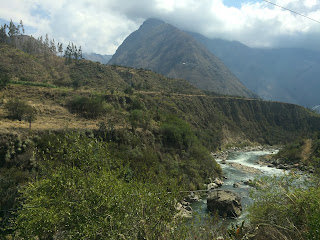 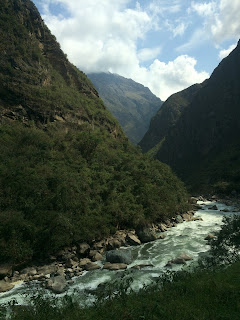 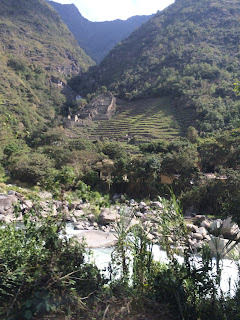 Henrik had a bad time though, he is just getting worse.

After almost two hours, we reached Auges Calientes (aka Machu Picchu city). Going out from the train station, we had to go through millions (well, almost) of souvenir shops. Very tourist-y, very not-nice.

The town is pretty small so we reached the hotel after just a few minutes, even though it was on the other side.

The hotel was called Tierra Viva and we got room 508 on the top floor. 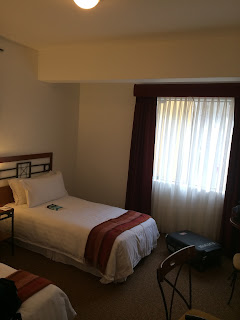 The view from the room was very divided: 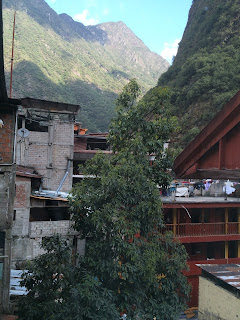 While Henrik was resting, I went out and looked at the town. 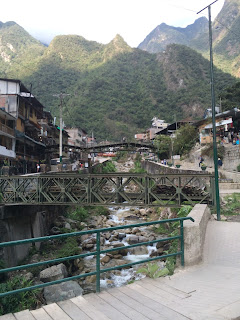 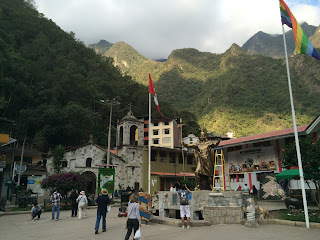 When I got back to the hotel, I took a quick rest then we went out to a restaurant.

I had a Peruvian dish, Lomo Saltado (beef with vegetables and rice + french fries). It was good.
Henrik went home before the food arrived. He really doesn't feel well.

Then time to sleep. We have yet another early morning tomorrow.
Posted by Halo at 6:08 am

Yes, unfortunately I had caught something and I was ill this day. During the flight and the frantic cab ride I was fine, but starting on the train I felt more and more ill to my stomach. I was there on the train but still missed most of the scenic views from the train. We shared a table for four with a nice American couple. His name was easy enough to remember as it was Patric, but what was her name? I think they were from Texas.

At the hotel I crashed in bed and even though I made an effort to join my buddy for dinner I had to go back home right away. Cold and sweaty I got back in bed. Luckily I was not as sick as could be, but I had to spend most of the time in bed until early next morning…