Time to finish off Belfast.

Seems like the Irish weather finally cough up with me. It was pouring down as I walked around in the city. Went to the alternative store "Fresh Garbage" (which was alternative - but too much hippie/reggae for me) and some other stores. Even found a "Forbidden Planet" store here. :)

I finished off my citywalk by going on a tour of the shipyard where the Titanic (and her two sister ship + many others) were built.

This was the dry dock where they kept made the final touch for her first (and last) voyage. 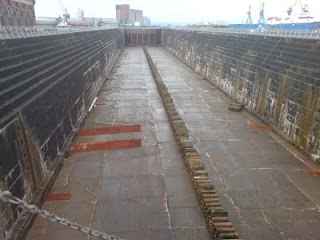 One might wonder why they are so passionate in Belfast for a ship that only took 12 days to sink, but as they say here "She was fine when she left the dock". As a proof of that, her sistership, The Olympic (launched 2 years earlier) lasted her full lifespan before being decommissioned.

Anyhow, nothing much more to do here for me so I went to a movie (Dorian Gray - OK, but the book was better) and then home to my B&B.
Posted by Halo at 10:14 pm