Am I doomed or am I just stupid? You decide.

The day started off pretty ok, went to real good - and then turned to the worst day yet.

I started the day by driving to Hertz to return car #1, to make the whole car rental thing a whole lot cheaper. It seems Hertz didn't want that, because their daily rate for the three days I had the car was about the same as one weeks rent. So all in all, they ended up charging me 735 dollars (about 5100 SEK). OK, I thought - It's still better than before.

Shuttle bus from Hertz (btw, let this be a lesson to all - don't use Hertz unless someone else is paying the bill) to LAX (LA International Airport) where I take another shuttle to Dollar Car Rental.

They can't find me in their computers, but they make another one for almost as good price as my internet reservation (which I hadn't paid for yet). With some insurance and a GPS (I really need one!), the price is about 650 dollars (4500 SEK) + gas. It's ok at least, so off I go with a cream coloured Dodge.

I had looked on the map before I left the hotel to see what's close to the rental service (which was in Inglewood) so off I go to... Torrance High School!

Now why do I want to go there? Does Sunnydale High mean anything to you?

It is the school where Buffy went! And Torrance High was where they filmed most of the outdoor schools scenes. 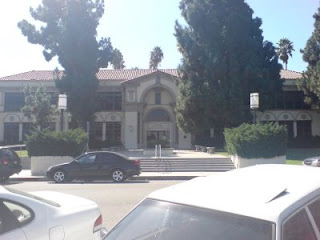 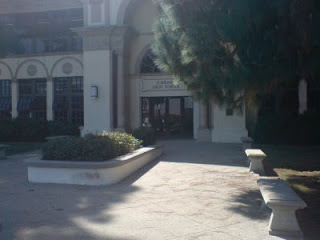 Unfortunally they had fences all around it so I couldn't get in to take pictures on the schoolyard. :(

But then again, I should probably be lucky I wasn't arrested for taking pictures on the school and their students...


Apperently they used the same high school to film the old Beverly Hills 90210 show if anyone been watching that show.

After that, I drove to Venice. By the way, seven lanes freeways - in each direction. There are some big roads here... Wonder if I ever will get used to it?

About the roads, they are mostly in bad shape here in LA. They were better in SF. However neither city seems to have heard of a "green wave" with the traffic lights. They are almost always red when you get to a new one. :( 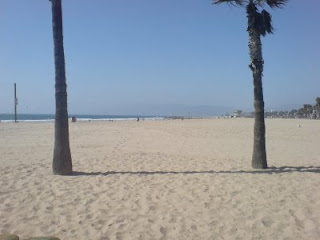 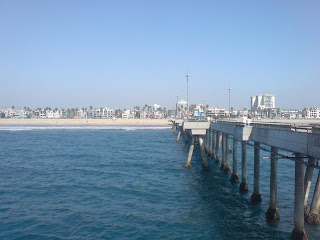 Since I was at this paradise beach, I figured I had to at least dip my feets in the water, which I did. Cold, but nice. 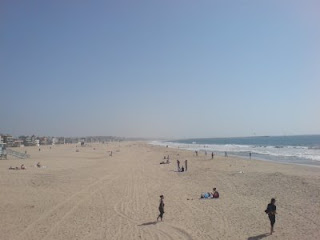 Then I spent some time walking along the beach. 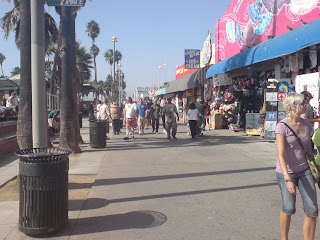 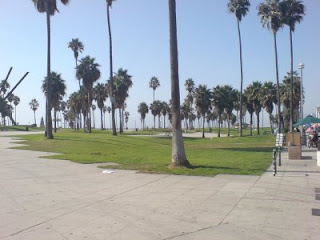 and watch the Muscle Beach (where Arnold used to pump while he was here). 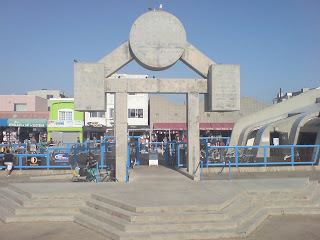 I also was outside Gold's Gym, where he used to spend a lot of time.

Life was good. Everything was bright, I had fun.


So I figured. I am at Venice, I will probably not return here while I am in LA - so why not go all the way and actually take a proper bath?


So I looked for some swin trunks that does not look like someone has thrown up on them and in the third store I actually find a pair of blue ones (not really good looking, but will work).

As I am getting ready for my swim - I realize that leaving all my things on the beach might not be a wise move, so I put everything in the car. But what to do with the car keys?


I figure either put them by my clothes with the chance of getting stolen (you never know...) or have them in my pocket and risking water damage & dropping them.

So I go and get a platic bag and put the keys in there - and the bag in my pocket. All set! And I get into the water! Still cold - and some larger waves and currents than back home, but I am enjoying meself. Until I realize that apperently the Pacific likes my car - I had dropped the keys.


I tried to look for them, but realize soon the futility of it. 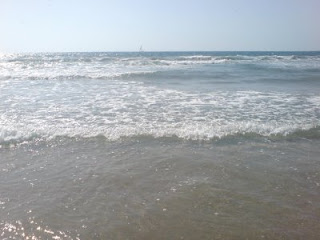 Anyone see my car keys anywhere?

So I am stuck on the beach with nothing really. No phone, no money, not even sunglasses - it is all in the car. :(

So I go back to the store where I bought the swin trunks and get them to help me. They try, but we can't find the number to the rental agency (all the papers are of course in the car...) - but a man from the resturant next door (he was more lika a regular bar customer in that resturant) helps out and we find the number (car rental is under "automobile rentals" in American yellow pages - go figure...). I even get to use his cell phone and after some discussion with Dollar (both from me and this guy), they will come with a new car - and tow the old one back (they don't have spare keys? Really strange). In addition it will cost me about 150-200 dollars (1000-1500 SEK) to help me out. :(
Anyhow, it will take about two hours before they arrive, so I ask this very nice guy to help out again. So he talks to the resturant manager to let me eat dinner - and pay once I get into my car. No problem there, so I get a pizza at this place (called The Terrance, btw - good place - try visit it!).


When I am done eating, the new car arrives - which is the exact same model as my old one, but this is black :)

After having settled the resturant bill (with some serious tipping - and paying for the guy's first drink when he comes in tomorrow), I wonder what to do next.


I didn't want to go directly to the hotel, I figured I could do some tourist-ish thing first, so I drive to the Griffith Observatory in Griffith Park. I arrive at about eight (yeah, that long took the whole "loosing the car keys" adventure - about three-four hours in total). They view from the hill is fabulous! (I even get to see the Hollywood sign! :)


My phone camera isn't the best in the dark, but here is a picture that turned out ok showing the LA skyline at night: 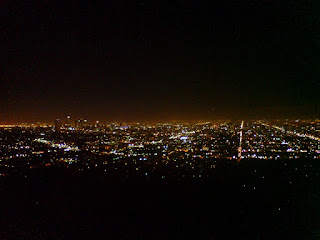 I went into the observatory (famous from such movies as Terminator "Your clothes... give them to me, now. ", Rebel without a cause and... Charlie's Angels 2) plus it was in the Star Trek Voyager episode "Future's End") and looked around.


It had the standard" The Universe - so does it work" thing going, which is excellent for the normal crowd. I had seen most of it before, but it was of course still fun.


I went to look in their big telescope and was actually the last person who got to look in it before they closed at 10. The view today was of the moon. Very cool to see it up front. :)
So that was my day. After the observatory I went back to the hotel and will now sleep - gosh, is it 1:30 already? :(
Tomorrow I have decided to leave the car at the hotel. It just brings me bad luck.
I will go to Hollywood (by bus) and will walk around there all day.
Looking forward to it! :)