Finally I get to have some vaction this year - and go to California, something I have wanted to do for a long time!

First of all, some information about the blogging I will do during my 3½ week stay here.

* I am writing in English, so my dear pirate friends can understand something.

* Updates will be once per day - at the most. I need to download my phone pictures to my laptop (blogging them directly is too expensive!) and that will happen once per day. If I can upload them to the blog depends on if I have an internet connection at my hotel or not.

After 22 hours I finally arrived in San Francisco (travelled Gothenburg-Frankfurt-Chicago-SF). Nothing really exited happened during the trip, but it was mostly long - and boring. 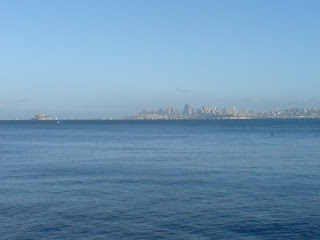 Spent the night walking to Union Square and back. Ate some food at a Jazz resturant (why not?! :))

Friday October 3rd
The word of the day; walking!

Feel like that was all I did today. Walking uphill, walking downhill, uphill, down... You get the drill.

So what did I see? More than I expected for one day.

I started with the most important; James Bond sightings! (I know -but, hey! It's me!): The City Hall. Here Bond and the very weak character Stacey Sutton got locked in an elevator, while Zorin tries to burn down the building.

After this I went to Lombard street. First uphill from the backside. Extremly steep! Then to the "crookedest street"; the serpentine road downhill. Wierd trafic planners - my guess is that they had to much to drink that day.

The continued walking got me to the harbour and Fisherman's Wharf. What can you say - it's a harbour. We have that at home as well... But still fun to see. No Bushman though. Disappointing.

Realized that it wasn't that late - so I took a beer in a pub (local brand, don't remember the name, but it was actually good) then walked up to Coit Tower, looked at the view and went down again.

Started walking towards the inner city again and through Chinatown. This was fun to walk in. Much more China-oriented than London or New York. Maybe not so surprising, but something extra anyway. For some reason I ended up in a Japanese sushi resturant (Sushi Rock) and tried sushi "more real than Swedish sushi". Not as much rise as I am used to, larges fish pieces (following the american tradition that everything is big over here) and green ginger. Not bad - but I like my sushi the Swedish way. Maybe I am just too used with it that way?

After the food, I went to the hotel to get some rest. Then out again towards a comic store close to here. Hotel's name is Whitcomb, btw - photo of the room will be up tomorrow or something. Got some new graphic novels. Bought Precher vol 1 & 2. Looks pretty good.

Back to the hotel for some Puzzle Pirates - then to bed. 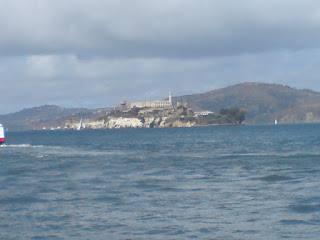 Got up early to catch the first boat to Alcatraz (9am). Went around the island and did the audio tour. Kinda interesting occupied by Indians 1969-1971. Never knew about that.

After this I signed up for a tour to Muir Woods and Sausalito. Just wanted to go to Muir Woods, but had to take Sausalito as a "bonus".

I still had two hours to kill before the tour started, so I walked around Fisherman Wharf for a bit - and behold! There was the Bushman! 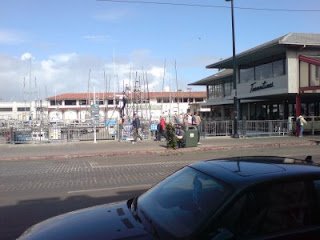 This is one wierd guy...

Finally the two hours were up and to the bus stop.
And the initial bus was full, so we had to wait almost 40 min extra for another bus to arrive and we stood there waiting in the wind. Not fun. Mostly cold.

Anyhow - we finally got away, driving over the Golden Gate bridge and to Muir Woods. Now there are some amazing trees in that forest...

Some pictures from the woods: 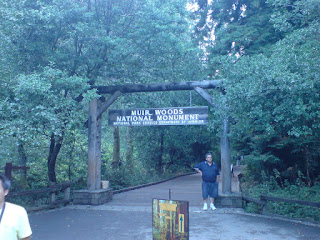 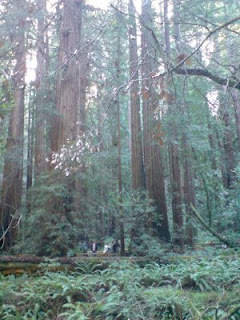 The bus dropped me off at the hotel and I realized the there was a festival going on not far from here ("Love Festival"). If I would have been less tired and a bit warmer, I would probably have gone there, but the boring Patrik said that I better go to the room instead, So up I went, started writing this blog and ordered room service.
Noticed that I has burned myself in the face and shoulders. /me shake fist toward the sun!
Better get some sun oil for tomorrow. It's going to be American football day! 49ers vs Patriots. Looking forward to it! :)
Now time for bed. Night all!
Posted by Halo at 6:04 am