Today I didn't have anything important on my schedule, so I decided to go all out and become a tourist 100% - and go on a tourguided bus.
Now, there is something you should know about me - I never do anything like this. I try to be as un-touristy as possible when I go on holiday, but I figured why not try it for once; do a tour around some sights in Hollywood + see a few celebrity houses.

I can tell you right now, I felt dirty after it - and wanted desperatly to take a shower.
I will never do this ever again. I promise.


Anyhow, I took the bus to Hollywood again.
By the way, did I ever give you a shot of the Hollywood sign? If not, here is one now: 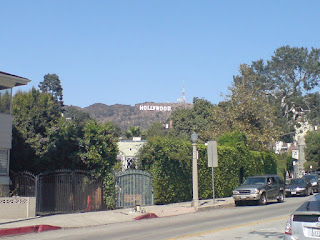 At the Chinese theater (where most tours starts from) I looked up what I wanted to do - and it turns out I had to do two tours.
First out, I got to see some Hollywood landmarks, like the Hollywood Bowl (Monthy Python FTW!): 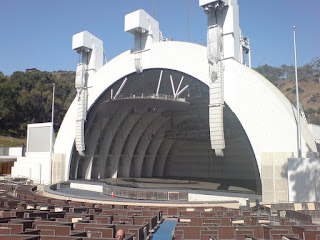 then to a few studios, of which Paramount was the most well-known: 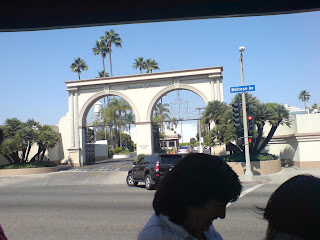 I thought we would get up to the actual Hollywood sign, but no-no, we didn't very close at all (see first picture in todays blog).


After that, I got to another tour - "home of the stars" kinda thing.

Not much fun houses at all really, but I did get to see this: 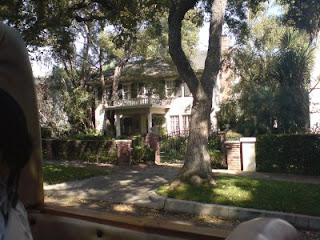 the house where the first Halloween movie was filmed (which was pretty cool to see :)

Othervise we had the death places of River Phoenix and John Belushi, the LA homes of Sean Connery, Jackie Chan, the homes of Andrew Dice Clay, the Beckhams and where Tom Cruise & wife used to live and several older TV stars lived or had lived.

Also saw the Osbourne's old house where the show was filmed. Apperently Christina Aguilera lives there now, but who cares about that?

One of the famous Beverly Hills streets: 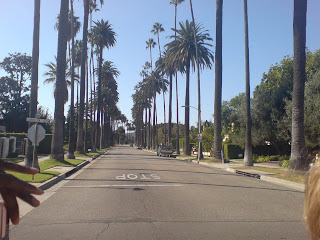 The streets in Beverly Hills only has one kind of tree on their streets - and there are only four that has palms. The rest has other trees, like oak, maple, magnolia, but still it is the palm-roads that is most connected to the area.

One fun house we passed was the "Witch house", which looked like a gingerbreak house. No famous people lived there, but it was still a fun house to see. :) 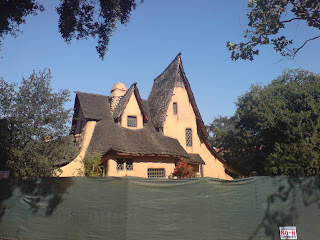 We also drove on Rodeo drive (coolest thing there was the Prada store, which had no signs what so ever outside that it was actually a Prada store - I like those kind of things :) and Melrose Avenue, Melrose Place (which has only stores, no appartments, btw) and some ther streets.

After that we were finally back and I could get out of the car and the humiliation of looking (and acting, I guess) like a tourist.

Bus home again - and a meal at BJ's, a nice place where I had an excellent Angus burger and a few wheatbeers.

Then back to the hotel room to rest. I need my strenght tomorrow, when I will spend the whole day at Universal Studios.

It seems like I might get to meet up a pirate from the game here in LA - someone I wanted to meet for a long time.
I even talked to her tonight (and she told me not to do Univeral Studios tomorrow, so whe'll see what happens). We might get together tomorrow when she gets home from work. She's a fun girl in game, so it should be interesting. :)
Posted by Halo at 7:25 am