Today is Puzzle Pirates day!
This is the big day in my San Francisco stay. I am going to visit Three Rings - the company that makes Puzzle Pirates - the online game I am addicted to. 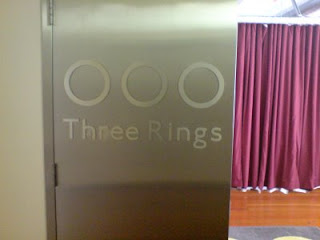 I had already emailed Hypnos, the "Ocean Master" at OOO that handles some day to day stuff at the office, besides her work as an OM and overseer of the official Puzzle Pirates webforum.
Hypnos was very nice and she showed me around the office (see pictures below) and we talked alot about the game, some mechanics behind it - and stuff that was about to be released.

The Three Rings Office (especially the Puzzle Pirates part of it) is just amazing. They had decorated it like inside of a submarine with a lot of oceanlike things inside - and it's full of details (see more pictures in this Wired article about OOO).

The entrence to the Puzzle Pirates part of the Three Rings office: 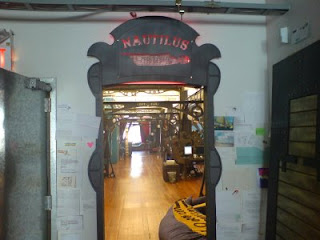 Here we have Hypnos in the entrance to their "hidden meeting room" behind a bookshelf: 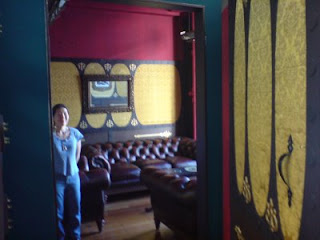 And here is the room itself. Apperently the OOO boss, Daniel James (aka Captain Cleaver) do hold meetings here for investers and when doing interviews and stuff. :) 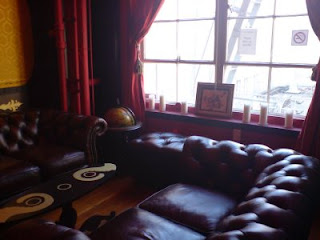 Some more pictures from the office: 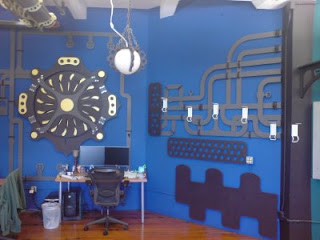 Who wouldn't be inspired to develop if you had an environment like this?
This is Cephalopod's desk: 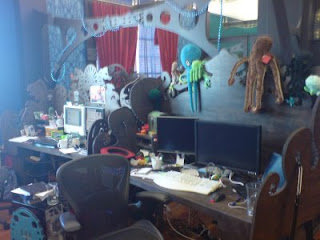 A place to relax?
Note: the cabinet holding a Cleaver over the TV actually says something like "In case of a tentacle attack, break the glass"! 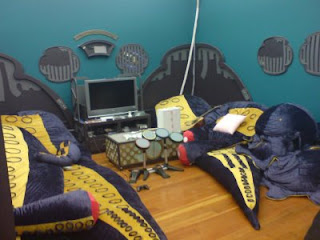 And below is me and Captain Cleaver himself! A very nice Englishman, who has settled himself in the US. We actually talked not just about the game (and american football for some reason), but also electronic music. Apperently he had also been into the whole New Romantic wave when it came and we spoke about the old Depeche Mode songs and the latest Yazoo tour and what a genious Vince Clark was. Cleaver know his stuff. :)
He also told me he would check out Unter Null (the T-shirt I was wearing at the time), but I doubt he will enjoy it as much as the electronic music from the 80's... 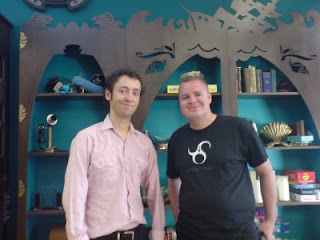 So after spening an hour in their office (thank you OOO!) I was off again to new adventures!
I had decided to do some shopping today, so I went to the Westfield Centre. They have rounded escalators there O.o
Never seen that before: 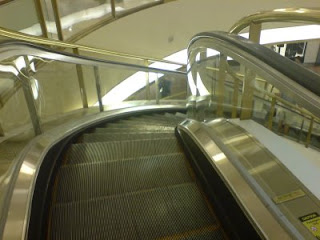 When that was done, it was time to head back to the hotel (did I ever mention the name? It's Whitcomb, anyhow) and time for some... Puzzle Pirates gaming. What can I say? I am addicted...
We made a fun flotilla attack (that was pretty successful :)
When that was over, it was time for food. I was recommended a resturant by a beautiful woman, so I went there (I am pretty predictable...). Unfortunally she couldn't join me - this time. ;)
So - the resturant was of the italian sort and was called Brindis. Unfortunally they were out of a few dishes, but I had the pan grilled chicken - and it was lovely. I did however feel that one of the waitresses was a bit too pushy to bounce people into the place, which spoiled some of the mood, but nevertheless - I liked it.
After that meal it was back to the hotel again to write this blog, check up a few things for the trip to and in LA on Wednesday.
I will see you again tomorrow, when I have a day off in San Francisco. I think I will just relax and spend the day in Golden Gate park with a book.
Ahhh, how I love vacations. :)
Posted by Halo at 6:33 am