Last day of the first part of my visit in LA. I checked out at about 9am and drove towards San Diego. On the way there I made a stop at 1428 Genessee Av. Why? This is the house they used for the Elm Street movies (1428 Elm Street, remember?). Just one problem. When I got there, I realized it was the wrong house. I was not even in the correct county! (I was in Orange)
I guess Freddie was correct when he stated "Every town has an Elm Street!" in the sixth Elm Street movie...
(I need to find the correct Genessee Av when I get back to LA...)


So a little dissapointed I continued south to San Diego. Fortunally it was on the way so I didn't loose that much time.

At about noon I hit San Diego - and Sea World.
Here I stayed until it closed, at 6pm. And had a wonderful time. This is absolutly the best Aquarium park I have ever been to.
If you ever get even slightly close to San Diego - don't miss it!


I came just in time for the first Killer Whales show - with the star of Sea World, Shamu! 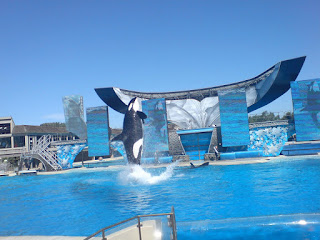 It was just amazing. The things they have communicated and worked out a show with these gigantic creatures. Fantastic! 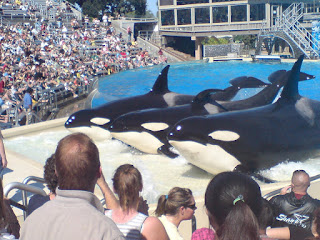 And the first 10-12 rows were called the "Soak Zone", which was a good name, since they had the whales splashing water all over them. :)
(they had this zone on all of the shows I went to - and you were always in danger of getting soaked!)
I sat on one of the highest rows of them, so I didn't really get wet. This time. 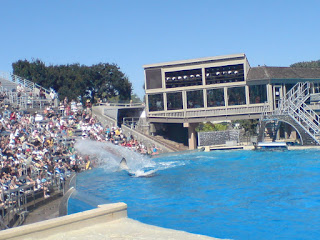 After this I found this ride (called "Shipwreck Rapids"), where you go down a stream of water in a round raft. Pretty cool I though - and got in line. 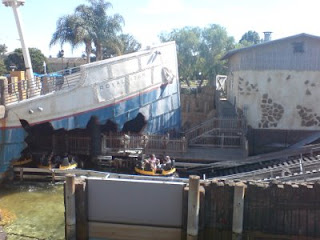 It did say you were going to get soaked in this ride, so I secured my valuebles (passport, camera, phone, wallet) as best as I could. And off we go! 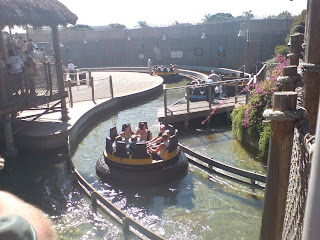 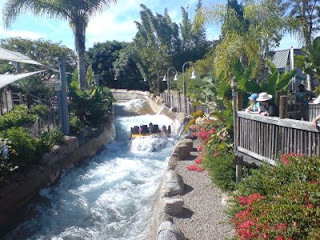 It was impossible not to get wet on all kinds of places, but I managed to stay out of being really soaked. Then came the waterfall... 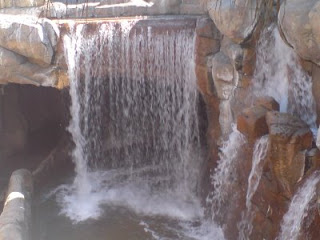 we went through this - head on - and not in a very fast pace. Normally they turned off most of the water when rafts go through it, but not ours. And soaked we got.
Good thing the sun was up, so I managed to get dry after an hour or three...


And after the ride, I also found this: 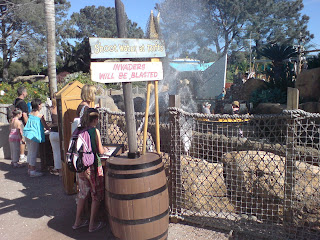 A place where you could actually shoot a water cannon on the rafts passing by!
Fun idea! (and of course I just had to try it out... ;)


Moving further down the park... I found some animals you could pat; dolphin (more of those later on) and stingrays: 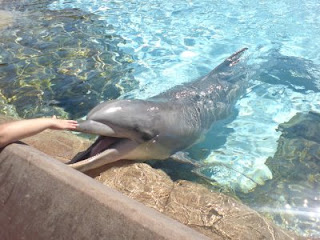 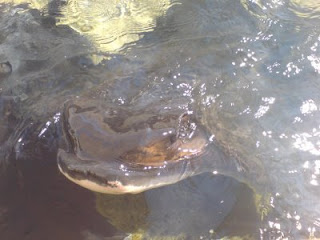 When I got to the big dolphin arena, it was just in time for the dolphin show, so I went there.

And I got to see an other great show. The animals really seems to enjoy performing. :) 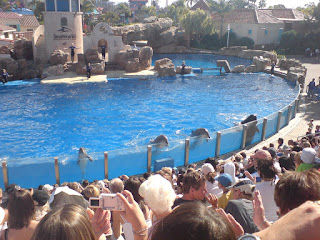 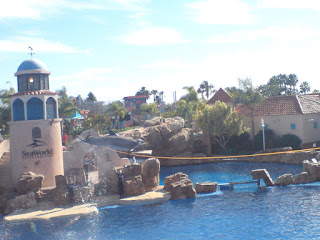 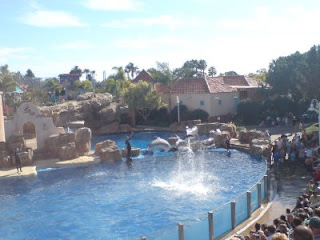 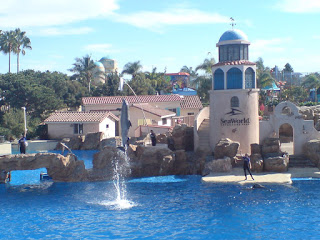 And of course; more spalshing: 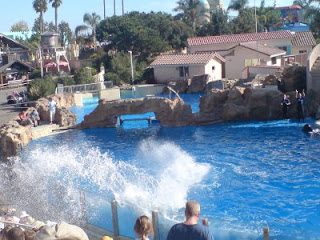 From the dolphins straight to the next show; the Sea Lions & Otters!
They had a special Halloween show right now and it was very funny. :) 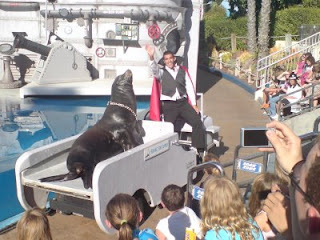 Mouth to mouth with a sea lion...? 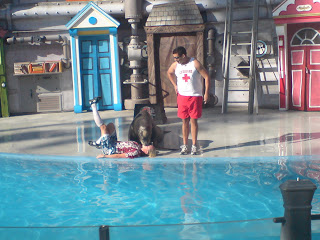 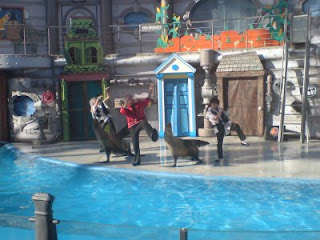 After this I went to the Shark Encounter, with sharks swiming in a pool you stood just next to without any glas or anything - just you and the sharks. :)
It also had a great tunnel you could go through that went in the water, so you had water - and sharks - all around you. Very nice! :)


I pushed on inside the park and got the the colder exhibits, starting with the penguins: 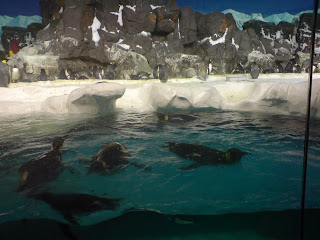 They had done a cool (no pun intended at all) "Wild Artic" part which included a simulated helicopter flight to their "Artic base camp", where they had Beluga whales and Polar bears . 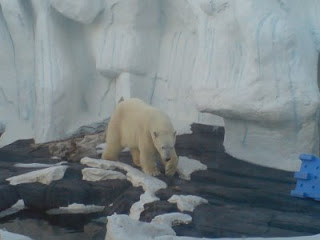 It was almost closing time by now, but I did manage to get a ride "Journey to Atlantis" - and without getting to wet! (it was like the "Flumeride" thing we have back in Gothenburg). 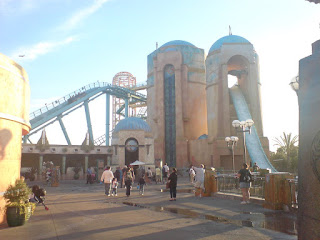 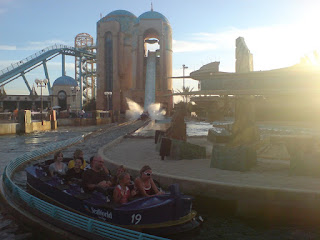 I also did their Skytower ride (think Gothenburg's "LisebergsTornet") to get a nice view of the nearby sights.


The park closed - and I went to find somewhere to sleep. I took the nearest Motel 6 (found one at the Hotel Circle) and checked in.

The corridor where my room was, isn't the most inspiring thing I have seen... 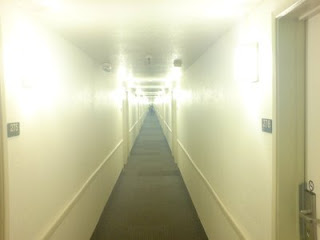 but here I am. 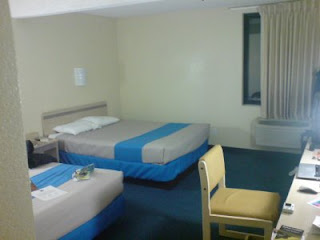 I got a very nice steak at the local resturant - and a few beers.
Now it's time to sleep. Good night!

Edit: More people (here in San Diego) has adviced me today not to go to Tijuana - so I won't. I am looking through some tourist stuff to see what I will do instead. I'll guess we'll see what happens tomorrow!
Posted by Halo at 5:53 am