I woke up late (actually the maid woke me up by coming into my room). But who cares - vacation, right?

First stop after I left the hotel was New York New York, where I went on the roller coaster. It was pretty ok - scariest part was they had made it in oldstyle - so you thought it might break any minute.

After that I bought tickets for the remaining shows I had on my lists, went into Madame Tussaud's and did some shopping.

That took some time and when I got back to the hotel it was almost time for show #1 tonight; the Tournament of Kings here at the Excalibur. 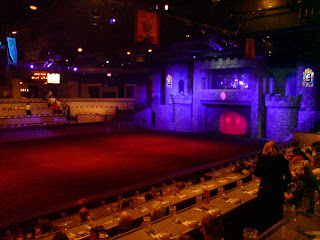 Middle age eating and entertainments. There was swordfighting, horseriding, fair ladies, acrobats, battle between good and evil - and no forks or knifes.

I was on the team of the Russian king and we cheered him on as he charged against the other kings. He did not fight fair, but who cares? It's the result that counts!
The show was good, but it wasn't much food you got.

After that I went to Treasure Island to see the Siren show they have there. Dancing sirens versus pirates. It was fun to watch. :) 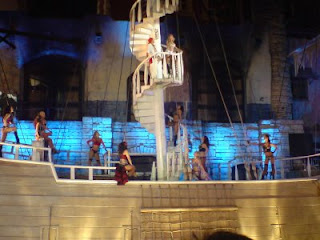 Then over to The Venetian to see Blue Man Group. Finally! I have wanted to see them for a while now. I also got lucky. I had a mid-prize ticket ($99), but it was apperently a slow night, so they moved me closer to the stage and into the center - where the high prize seats were. :)

And what a show they had! It must have been the best show I have ever seen. They were just amazing - and very funny. The stuff they did was pure gold.
If you ever get close to somewhere they preform - you must go there! 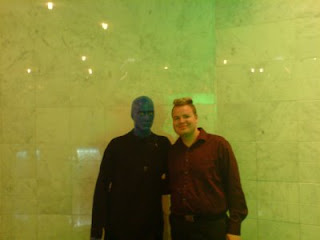 Me and one of the blue men.


On my way back to the hotel I stopped at a bar in New York New York; Coyote Ugly. It was... different. Drunken american girls finally getting some time off from their parents and they go wild. We don't have that back home. At least not on the places I go to.
Anyhow. The place closed at 2am already so I went home.
Posted by Halo at 10:18 pm