Football Sunday! Today it's time to see some American football, San Francisco 49ers vs New England Patriots - should be a good game. I took the Muni & buss over to Candlestick Park... 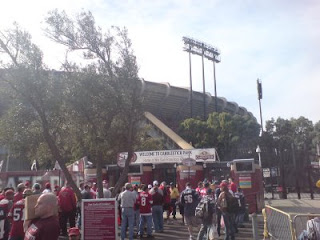 and were there about two hours before the game started. Was I alone? Not even close: 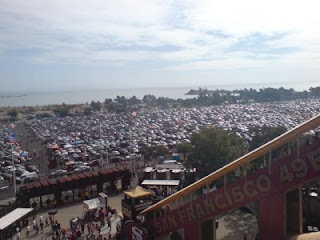 People show up early for these things - and do the american thing: being weird. 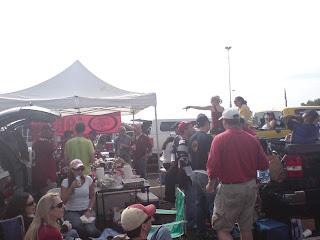 Anyhow; I went through the gates, looked at the team shop and the cheerleaders a bit (they smile a lot, don't they?). After this I put my game face on and went in. 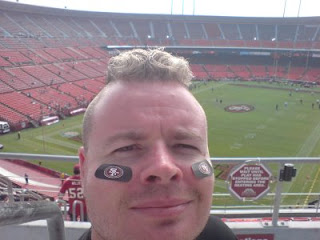 I was afraid to have bad seatings in this large arena - over 70 000 seats which is (let's face it) a pretty large arena for a swede, but they were not too far away from the field at all. 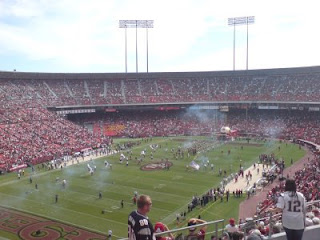 I saw the game pretty good from my seat: 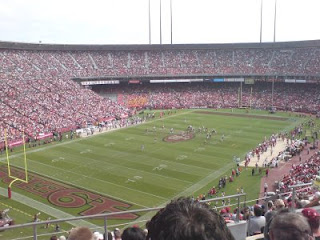 49ers started the game very good with to touchdowns in the first quarter, but then Patriots took over the game more and more.
Final score was 21-30 for the Patriots. Too bad, but the they were the better team over the whole match.
Sitting in the sun for four hours wasn't good either. My bad sunburn just got worse.
Good thing I am leaving this town soon and go to LA. No, wait... That won't make it better, will it? :-/
Straight back to the hotel room after the game. A 49ers fan was nice enough to pour beer over my jacket, so I have tried to clean it off and it's now is hanging in the shower to dry off.
I will try to stay inside as much as possible the next few days anyway (because of the sun), so I don't think I will need it.
That's it for now. I might do another update later on tonight.
Oh, that's right; this is my hotel room I have now: 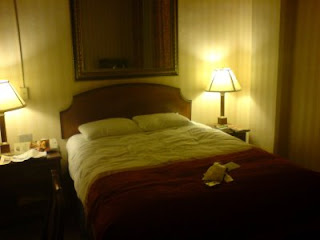 The bed anyhow. It takes up about half the room (not counting the bathroom).
Cheers!